I had a wonderful week with Northern’s MA in New Testament cohort — pondering the theology of Paul on the Christian life as taught in Romans 5-8.

LONDON (Reuters) – Tiny pieces of plastic have been found in ice cores drilled in the Arctic by a U.S.-led team of scientists, underscoring the threat the growing form of pollution poses to marine life in even the remotest waters on the planet.

The researchers used a helicopter to land on ice floes and retrieve the samples during an 18-day icebreaker expedition through the Northwest Passage, the hazardous route linking the Pacific and Atlantic oceans.

“We had spent weeks looking out at what looks so much like pristine white sea ice floating out on the ocean,” said Jacob Strock, a graduate student researcher at the University of Rhode Island, who conducted an initial onboard analysis of the cores.

“When we look at it up close and we see that it’s all very, very visibly contaminated when you look at it with the right tools — it felt a little bit like a punch in the gut,” Strock told Reuters by telephone on Wednesday.

Strock and his colleagues found the material trapped in ice taken from Lancaster Sound, an isolated stretch of water in the Canadian Arctic, which they had assumed might be relatively sheltered from drifting plastic pollution.

The team drew 18 ice cores of up to 2 meters (6.5 feet) long from four locations and saw visible plastic beads and filaments of various shapes and sizes.

More than one blogger/website responding to the recent announcements of apostasy, which is but a light way of describing what the apostates are doing.

Steve McAlpine’s take on “Demas“: (at link you can see more) 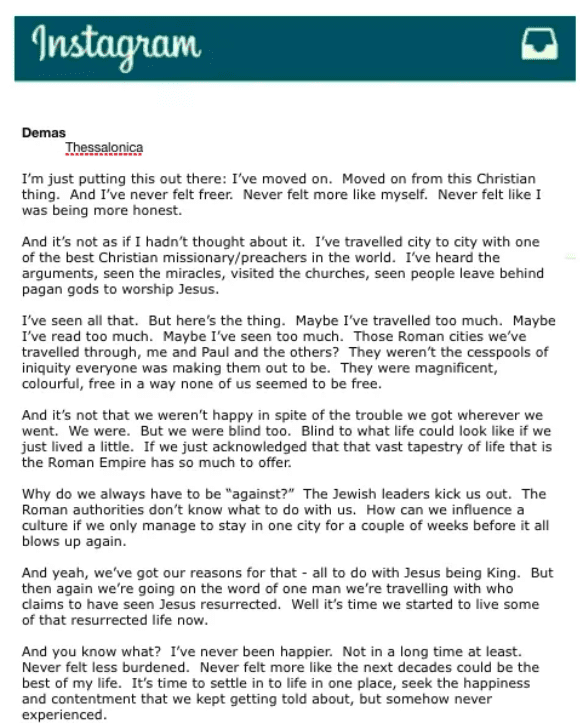 The irony of using a Christian rocker did not escape everyone:

John Cooper, the lead singer for the band Skillet, posted a stunning response on Facebook yesterday to the recent public renunciations of Christianity by Joshua Harris and then Hillsong songwriter, Marty Sampson. (Sampson has since slightly walked back his initial statement after Dr. Michael Brown posted an open letter challenging Sampson’s assertions.) Below is Cooper’s entire statement, which was also published at Cogent Christianity. I’m reposting it here because it’s so good and so important, I want to make sure everyone who follows this blog sees it. Thank you, John Cooper, for saying what few have the insight or courage to say. God bless you, brother!

August 16, 2019
Prayer isn’t the Opposite of Action
Next Post

August 17, 2019 The Creator Revealed: Michael Strauss
Recent Comments
3 Comments | Leave a Comment
"Amen."
Eileen Almighty and Everlasting God
"This is John OrtbergNo, This is John Ortberg, emphasis mine"Once Ortberg was convinced the volunteer ..."
swbarnes2 This is John Ortberg
"Hey I realize this is an old post, but can you tell me the name ..."
Malissa Weekly Meanderings, 4 January 2020
"Christaine and others,In theory what you espouse sounds nice, sweet, loving, incredible, worth celebrating! In ..."
David Russell The Gospel of With Us and ..."
Browse Our Archives
get the latest from
Evangelical
Sign up for our newsletter
POPULAR AT PATHEOS Evangelical
1