So You’re a Pacifist: What about this…? 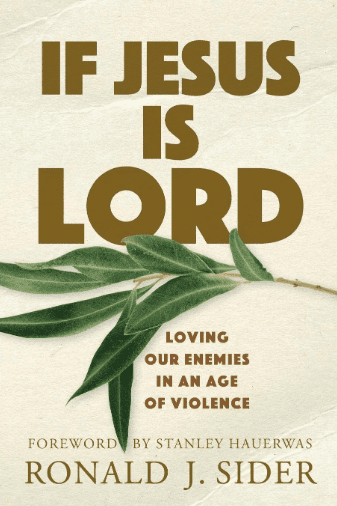 If I’ve seen it once, I’ve seen it a hundred times. When someone says “I’m a pacifist” (or something remotely close), the hands go up with a series of “What abouts.” Ron Sider, in If Jesus is Lord , has heard them all and responds to many of them.

What about Jesus’s statement that he came to bring a sword? Or the fact that there are several stories about devout soldiers and none were told to stop being soldiers? Jesus used a whip to cleanse the temple. He even told his disciples to buy a sword. In places, the New Testament seems to praise Israelite warriors and endorse the destruction of the Canaanites. Does not the use of military symbols endorse military action? Jesus warned about wars and rumors of wars. Does Matthew 15:4 mean Jesus endorses capital punishment? Romans 13 certainly says that government uses the sword to execute divine vengeance on evildoers. In fact, the New Testament says that God punishes evil, and the book of Revelation uses violent, bloody imagery to describe the final victory over evil.

Do not all these things add up to a clear endorsement of the legitimate use of killing to overcome evil? Paul Copan and Matthew Flannagan put it bluntly: “To proclaim an absolute pacifism . . . requires dismissing or ignoring Jesus’s own authoritative statements, vast tracts of Scripture pertaining to divine judgment. . . and the book of Revelation.”

I offer his brief summaries for some of his questions, and none omitted are at the top of “gotcha lists.”

When we read Matthew 10:34 in context, it becomes quite clear that Jesus’s words have nothing to do with his disciples using the sword. Rather, Jesus uses metaphorical language to warn that his followers will experience rejection by family and severe persecution from those who reject his message.

The subsequent statements of Christian authors (after the New Testament and before Constantine) further undermine the view that the silence about whether the soldiers who met or believed in Christ should continue as soldiers means that Jesus and the New Testament authors thought that the military profession is legitimate. As the section in chapter 13 titled “Pre-Constantinian Christianity” shows, every single Christian author in this period who raises the question of killing says Christians should not do that. Every Christian author who discusses whether Christians should join the Roman army says they should not. And the Apostolic Tradition (a church order probably dating from the mid-second century to the first part of the third) specifically deals with how to treat Roman soldiers who become interested in Christian faith and request preparation for baptism. They can be prepared for baptism—but only if they agree never to kill! And baptized Christians who join the army must be excluded from the church.

[Temple cleansing] is story demonstrates the coercive power of moral authority. But it in no way supports the use of violence, much less killing.

[Buy a sword] Preston Sprinkle has examined ten highly respected commentators on this passage. Many were not pacifists, but nine of the ten understood Jesus’s words in a figurative way, not a call to armed defense. Darrell Bock says Jesus’s words about buying a sword are to be understood in a symbolic way. Reformed commentator William Hendriksen says clearly, “The term sword must be interpreted figuratively.” British New Testament scholar I. Howard Marshall comments, “The saying can be regarded only as grimly ironical, expressing the intensity of the opposition which Jesus and the disciples will experience.” Most commentators agree with Hays that in this passage, “the reference to a sword has a figurative purpose. ”

[Military leaders] b argue that Stephen’s and Paul’s sermons justify Christian participation in war is simply to read into the text what the text does not say.

[Military symbols] A quick explanation of Paul’s use of military symbols shows that he explicitly says that Christians do not fight the way the world does.

[Romans 13] Paul embraces the typical Jewish understanding that all governmental power comes ultimately from God, who works in history to achieve God’s purposes. But that does not mean that God wills or approves of all that political rulers do. Jesus told Pilate that Pilate’s power comes from God (John 19:11), but that does not mean that God approves of Pilate’s unjust decision about Jesus. Again and again the Old Testament says God uses pagan rulers (e.g., Isa. 10:5-11; 13:3-5), but God clearly disapproves of some of their actions (10:12). Nor does Paul think God approves when the Roman authorities persecute Christians. Nothing in the text suggests that Paul means that God approves of all the actions of the governing authorities that God somehow ‘establishes.” The text does not even say God wants government to execute vengeance via the sword. It simply says that government does that and God uses that to restrain evil.

[What about God’s violence?] To say that in the end some people depart eternally from God is not to claim that God preserves some people in conscious existence in order to punish them eternally. I am inclined to understand eternal separation from God as the result of God taking our freedom so seriously that God (with immeasurable sorrow) allows people to reject God’s offer of loving forgiveness so long that they cease to exist. It would be unloving for God to force them to embrace God’s love. If some people experience eternal separation from God, it will be “because they have resisted to the end the powerful lure of the open arms of the crucified Messiah.’

[Revelation’s violence] he central point is that God finally conquers evil. We should not try to decipher the symbolic imagery to decide how exactly God in Christ does that. Even more important is the fact that nowhere does Revelation say that the saints fight in this final battle. Hays is right: “A work that places the Lamb that was slaughtered at the center of its praise and worship can hardly be used to validate violence and coercion. God’s ultimate judgment of the wicked is, to be sure, inexorable. Those who destroy the earth will be destroyed (11:18);… but these events are in the hands of God; they do not constitute a program for human military action.’

Careful examination of these passages confirms the view that the New Testament consistently teaches that Christians should never kill.