What is “Biblical” Theology Anyway?

Most everyone claims to be “biblical” when it comes to Christian convictions. If one listens carefully, however, one will grow weary with the confusion created by the term “biblical.” Complementarians say their view is biblical while egalitarians clap back with the same claim and the complementarians then go to social media to announce the egalitarians have a false hermeneutic. We could use the same illustration for all sorts of biblical claims: politics, church and state, soteriology, theologies of the atonement, and you know what I mean. 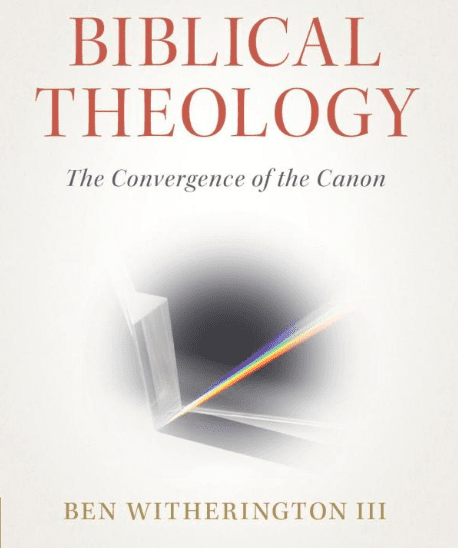 My long time friend and prolific writer, Ben Witherington III, sets out to ask and answer this question about a “Biblical theology” in his newest and big book, Biblical Theology: The Convergence of the Canon. For the length of the thing, and it’s long in pages and a bit small in print, the ppb price is nothing less than a steal.

He thinks of biblical theology as a discipline of examining and describing the Bible’s unified message about God and God’s redemptive work as it unfolds throughout the pages of the Bible and comes to fulfillment in the revelation of God in Christ — Father, Son, and Spirit. Thus, “biblical” is what the Bible says and “theology” is about the theological content of what the Bible says.

Ben’s major optics are these:

He examines God as the subject
He cares deeply about the symbolic narrative world of the Bible
He examines the sufficiency of “covenant”
He probes the value of the Reformation (and where it went wrong)
He knows its about theology, ethics and praxis

He’s well qualified to write a book like this. Very few are, fewer are willing.

He draws together some major conclusions and I will simply quote him:

What are some of the positive major insights or conclusions of this study? We may list the following:

(1) without a deep concern for careful contextual interpretation and the historical givenness of the text, much can go wrong when one attempts to do biblical theology. In particular, the OT must be allowed to have its own say, its own contribution to biblical theology, which is chiefly to provide us with a portrait of Yahweh, the creator God, and how he called and formed a people which came to be called Israel.

(2) Biblical theology also requires a commitment to a theology of progressive revelation. Really, protoTrinitarian and then Trinitarian thinking does not begin before the Christ event, and then only gradually does it become clear that even Binitarian thinking (a Godhead involving the Father and the Son) will not be adequate. The NT canon is progressively more Trinitarian the further one goes in the canon. This is not simply an evolutionary or chronological development, because some of the highest Christology is some of the earliest – for instance in Paul’s letters and perhaps in Hebrews as well.

(3) While covenantal theology is a very important part of biblical theology, it is critical to realize that with the exception of the New Covenant, none of those covenants were everlasting or permanent covenants, and it is incorrect to say that there has just been one covenant between God and his people, in many administrations. Furthermore, there are no unilateral or unconditional covenants in the Bible, either. Furthermore, HESED means mercy, not God’s tenacious loyalty to a particular covenant, say the Mosaic covenant. God is faithful to his character, and to his promises based on his character, but covenants come and go, are fulfilled or become obsolete until the new Christ-inaugurated and Christ-centered covenant appears.

(5) Election and salvation, though interrelated matters, are not identical matters. For example, Christ is God’s chosen one, his anointed Elect One, but he does not need to be saved. Furthermore, in both the OT and the NT one can be among or a part of the elect people, and in the end not be saved. Furthermore, as we noted repeatedly, salvation in the OT does not refer to “salvation by grace through faith in Jesus Christ.” Indeed, it often refers simply to God rescuing, redeeming from bondage, or healing some OT figure or group. One has to have an understanding of how the concept of salvation grew and developed as time went on and the canon grew larger.

(7) Finally, we used the word “convergence” in the subtitle precisely because all the pieces of a necessary full-fledged biblical theology do not emerge until all the lines of development about the Father, Son, and Spirit and redemption converge in the NT, and in particular from about the Gospel of John on in the NT, reading progressively through the canonical witness rather than just chronologically.

Are There "Good Things" in Evil Deeds Like...
In a recent piece on polyamory, Preston Sprinkle and Branson Parler make...
view all Evangelical blogs
What Are Your Thoughts?leave a comment
Copyright 2008-2020, Patheos. All rights reserved.