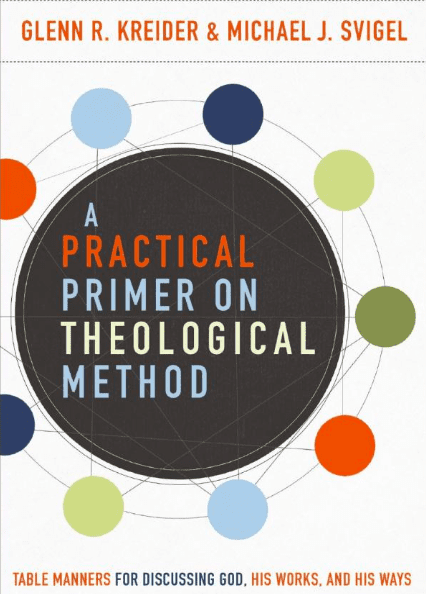 The following interview revolves around A Practical Primer on Theological Method which Kreider and Svigel co-authored.

The interview was conducted by David George Moore. Some of Dave’s interviews and teaching videos can be accessed at www.mooreengaging.com.

Full Disclosure: Glenn and Michael asked for my input on their book. I was glad to offer it and obviously commend their work, thus this interview!

Moore: There are various books available on theological method. Why write another one?

Kreider and Svigel: In the past couple of decades, there has been increasing interest in theological method by evangelicals. But in our years of teaching systematic and historical theology we’ve noticed that our students need some specific and concrete discussion of how to do theology. They need a primer—something written at an introductory level that anybody could pick up and put to use right away. We also wanted to present what we call an “integrative theological method in the classic Christian tradition.” We didn’t want to just say in simpler words what others have been saying in more complicated jargon. While our primary concern was to introduce “newbies” to the task of theology, we also wanted to make a real contribution to the guild. So, even advanced students and professional theologians will get a lot out of this introduction.

Moore: When one hears “theological” and “method” juxtaposed it is easy to conclude it must be boring, irrelevant, and so who in the world should care? So, why should we care about theological method?

Kreider and Svigel: Theological method is not like the methods in so many other disciplines. We expect our medical practitioners to know what they are doing when the remove our wisdom teeth, prescribe medicine to treat an infection, or perform surgery, for example. But theology—discourse concerning God, his works, and his ways—is the purview of all Christians. In short, we believe everyone is a theologian; everyone thinks about God and responds in some way. Those whose lives have been changed by the gospel are drawn to know the God who saved us: faith seeking understanding. We envision a method where theology is done in community, illustrated in the book as a diverse group of people sitting around a table interacting with each other from their unique perspectives, focusing on the ways God has revealed himself. According to the Scripture, he has revealed himself in words, especially Scripture, the world created and sustained by the triune God, and supremely in the person and work of Jesus Christ. We call these three cords of revelation the Word to the World, the World of the Word, and the Word in the World.

Moore: I don’t want to suggest that co-authorship is like marriage, so I’ll say it is marriage-esque. Were there any particular challenges you found in doing this book together?

Kreider and Svigel: We wrote the book together, by which we mean that each of us worked on a single document, adding content, deleting some, editing each other’s words. When we read the final product, it’s sometimes hard for us to tell who wrote which words. In many cases, we literally completed each other’s sentences. After an initial first draft (which was completed very early in the life of the project), we sent it out for feedback from colleagues—men and women from various disciplines and theological traditions. Then we actually made substantive changes to the manuscript based on the invaluable input of over two dozen people. We’ve never done a book project quite like this. It wasn’t easy, but it was fun. The process of writing and revising the book was itself an exercise in the integrative, dialogical theological method we describe.

Moore: Would you give us an idea of how “theological method” finds differences across the three Christian traditions: Roman Catholic, Protestant, and Orthodox?

Kreider and Svigel: One key difference is the role of Scripture and authority. The Protestant doctrine of sola Scriptura affirms that Scripture is the only inerrant, verbally inspired revelation that exists today. It is the norming norm, no external authority stands in judgment over it. Thus, neither the decrees of a magisterium nor the writings of the Fathers have final authority. Scripture does. While classic Protestant theological method certainly draws on a variety of sources and resources in the believer’s discourse concerning God, his works, and his ways, as conservative Protestants, we confess the centrality of Scripture in theological method. Scripture isn’t the only means God has chosen to graciously reveal himself to humanity. However, most doctrinal and practical questions that concern Christian theology are most directly addressed in Scripture. We believe this Protestant attention to the words of Scripture prevents harmful theological innovation and doctrinal deviation.

Moore: Should local churches be talking about and equipping folks on theological method or is this something that only finds its rightful domain in the seminary?

Kreider and Svigel: We are convinced that churches should not merely be more intentional about teaching biblical content, they should be teaching people how to read the Bible, how to understand the insights of the Christian tradition, how to respond and interact with the cultural concerns of the day, and to recognize the insights of other disciplines. Biblical and theology teaching has often been separated and isolated from the arts, ministry, science, history, life experience, etc. When faced with questions or quandaries not directly addressed in Scripture, many average church-going Christians lack the tools to engage in a careful, critical integration of the various sources of truth available to believers who want to submit to the Lordship of Christ in the twenty-first century. This means learning from Scripture itself how to think theologically. And it means drawing on 2000 years of believers who have engaged in the same pursuit. To face the challenges of the present day, we desperately need to know how to faithfully draw on the truth revealed in what God has said, what God has created, and what God has done—and continues to do—through the Lord Jesus Christ. This primer was written as a very simple, practical, and readable handbook for the church, not just the “theologian.”

Kreider and Svigel: Some of my (Kreider) most influential figures, which some might think unlikely, have been artists, especially songwriters. I love when reading the Bible changes the way I view God or his work in the world. That happens regularly. And also love when a songwriter helps me to see in the Scripture what I had not seen, or to see God’s activity in the world in a new way, or to find ways to express the truth in a metaphor I had not considered previously. Students have heard me say often, a good lyricist can say in a few words what it takes me paragraphs to say. My list of such songwriters is long but it includes Andrew Peterson, Derek Webb, Jon Foreman, Brandi Carlile, and Bono.

And I (Svigel) have been deeply influenced by figures from church history—particularly Irenaeus of Lyons, Athanasius of Alexandria, Augustine of Hippo, Thomas Aquinas, and John Calvin. Of course, these are all low-hanging fruit for theologians. It may surprise people that I’ve also been provoked and inspired by several non-theologians like the British Catholic novelist Graham Greene, the Pulitzer and Nobel Prize winning artist Bob Dylan, and even secular sci-fi authors like Asimov, Heinlein, Herbert, and Bradbury. But you asked for just one figure, so I’ll have to say Glenn Kreider probably provoked my thinking on theological method more than anybody else.

Moore: What are two or three things you hope your readers will take away from your book?

Kreider and Svigel: A renewed and growing love for Jesus Christ—that’s number one. Second, a confidence that they can join the conversation at the table of theological discourse concerning God, his works, and his ways, even if they begin by simply sitting and listening. Third, we want to ignite a passion to know God better, to serve him more faithfully, and to love others as Christ loves us.

October 27, 2019 Prayer for the Week
Recent Comments
2 Comments | Leave a Comment
"When looking for a solution for hemorrhoids numerous victims periodically spend huge a course in ..."
burakdeniz The Miracles of Creation? (RJS)
"This is a really weak take on DBH's arguments. I dont understand the impulse critique ..."
zech Reviewing David Bentley Hart
"So because 1-9 genesis referes to penis and then vagina. Therefore we can deduce that ..."
Jostein Syvertsen Yarhouse And Gender Dysphoria
"In some of the TTTE episodes pride goes before a fall crops up and that's ..."
Erica L Thomas the Tank Engine (Deconstructed)
Browse Our Archives
get the latest from
Evangelical
Sign up for our newsletter
POPULAR AT PATHEOS Evangelical
1

Self-Podcasting Podcast and Links
Autumn Last Year The leaves outside my window right now are still...
view all Evangelical blogs
What Are Your Thoughts?leave a comment
Copyright 2008-2021, Patheos. All rights reserved.