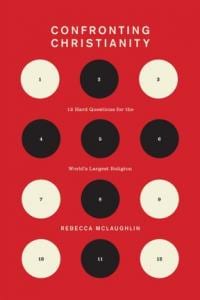 This is the next question raised in Rebecca McLaughlin’s recent book Confronting Christianity: 12 Hard Questions for the World’s Largest Religion.

On this question, I take a slightly different tack from that taken by Rebecca. To start to explore this question we need to define the word “condone.” According the Merriam-Webster condone means “to regard or treat (something bad or blameworthy) as acceptable, forgivable, or harmless.” Another dictionary on my shelf (Webster’s 20th Century Unabridged) defines condone as “to pardon, forgive, or overlook an offense.“

Second, we need to consider what we mean by “Christianity.” The key questions here: Is God an objective reality? and Is Christianity … i.e. following Jesus as Messiah and Lord … an objective truth? As a scientist I find this to be an important point.  Is there an objective truth I seek, or is all religion inherently and irreducibly subjective? Putting this differently, Is God constrained and defined by our human understanding and Christianity by human practice of the faith?

If ‘Christianity’ is defined by human practice, we must acknowledge that some forms have done far worse than condone slavery. They have actually endorsed, enforced, and preached it as God’s ordained truth. Other forms of Christianity (for example, the black church in the US) have found hope and freedom and comfort in the teaching that hears the cry of the oppressed and that justice will be served. The tyrants will receive their just reward (… i.e. punishment). Christians were also active, as an expression of their faith, in the abolition movement that ultimately ended slavery in the US.

But is there a Christian truth that transcends human practice, that is objectively true? And does this condone slavery?

I am fully aware that my understanding (and yours) will always be finite, limited, and flawed in one way or another.  This goes for my science and for my faith in God. But I also believe that there is an ultimate truth, and it is this that we seek to the best of our ability.

Nothing we have in the New Testament calls for a radical overthrow of the institution of slavery as it was practiced in the first century Roman world.  In this way we could, perhaps, say that Christianity condones (overlooks) slavery. Many of the early Christians were slaves. Paul tells them to be content as they are (although gain freedom if possible 1. Cor. 7:21). However, slaves are to treat their masters well and masters are to treat their slaves well. (The overriding command is clear: love your neighbor as yourself.)

In Christ there is no distinction of slave and free (Gal. 3:28, Col. 3:11). Paul’s letter to Philemon when he sent his runaway slave Onesimus back makes the point even more clearly. “although in Christ I could be bold and order you to do what you ought to do, yet I prefer to appeal to you on the basis of love. … So if you consider me a partner, welcome him as you would welcome me. If he has done you any wrong or owes you anything, charge it to me.” (v. 8,9, 17, 18)  The slave is now a brother to be welcomed as though it was Paul himself returning to Philemon. Paul didn’t see this as the time and place to overthrow the social conventions of his culture, but he did turn the reality upside down for those who followed Christ. Nothing in the Christian faith endorses the human exploitation of one human for the benefit of another.

Christianity does not endorse slavery or consider it harmless. But it does call us to live as Christians in less than ideal conditions, if that is where we find ourselves.

There is a reason why Christianity has always found a fertile ground in the oppressed and enslaved. Many in the early church (and the church today) come from those who are less privileged. Slaves in the US found Christianity a powerful hope rather than an oppressive philosophy.

The church must face its moral failures: many Christians have sinned with respect to slavery, and many white Christians have sinned against black victims of that oppressive and dehumanizing institution. But we must also ask, how many generations of faithful black believers do there need to be in America before we stop associating Christianity with white slave-owners and start listening to the voices of black believers that echo down to us through the blood-stained centuries? And how long will it be before we listen to the longing of Fredrick Douglass and thousands of other slave evangelists, whose conversions made them abhor slavery more than ever, but whose “great concern was to have everybody converted”? (p. 192)

Christianity does not condone slavery as acceptable and harmless. It overturns it and asserts the equality of everyone in Christ. It calls us lo love our neighbors (especially, but not only, fellow Christians) as ourselves.

The link to the book above is a paid link. Go with this one if you prefer: Confronting Christianity: 12 Hard Questions for the World’s Largest Religion.

October 29, 2019
Racism and Patriarchy—Twin Demons of Abuse
Next Post

October 29, 2019 State of New Testament Studies: 5 Free Copies!
Recent Comments
36 Comments | Leave a Comment
"1) Yes, male was created first. No, this was not unfair to the female. Rather ..."
NorrinRadd Context, Context, Context
"Wow, one year later and you still want to debate? let me copy and paste ..."
Elca Can Egalitarians and Complementarians Find Unity?
"So then are you prepared to repent of calling us "intellectually dishonest"?"
NorrinRadd Can Egalitarians and Complementarians Find Unity?
"We maintain that there are obvious physical differences. We understand that there are also psychological ..."
NorrinRadd What about Women Elders?
Browse Our Archives
get the latest from
Evangelical
Sign up for our newsletter
POPULAR AT PATHEOS Evangelical
1