Jesus returned to Galilee in the power of the Spirit, and news about him spread through the whole countryside. He was teaching in their synagogues, and everyone praised him.

Then he rolled up the scroll, gave it back to the attendant and sat down. The eyes of everyone in the synagogue were fastened on him. He began by saying to them, “Today this scripture is fulfilled in your hearing.” (Luke 4:14-21) 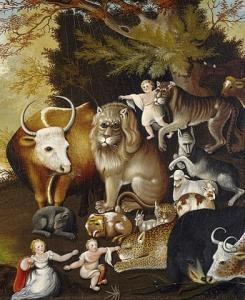 Listening to – or reading – the Bible straight through, repeatedly and regularly, has many benefits. As I have continued the practice of listening on my morning commute – for almost a decade now – the dependence of the New Testament on the Hebrew Scriptures has become unmistakable, sometimes cropping up in the most unexpected places. What pops to mind when hearing Isaiah 22:21-22? “He will be a father to those who live in Jerusalem and to the people of Judah. I will place on his shoulder the key to the house of David; what he opens no one can shut, and what he shuts no one can open.“

Echoes, allusions, and quotes from the Old Testament, permeate the New. The Psalms, prophets, especially Isaiah, lead the list. References to Isaiah average more than one a page. Ben Witherington III in his recent book Isaiah Old and New: Exegesis, Intertexutality, and Hermeneutics notes: “Almost everywhere one turns in the NT, one finds fingerprints of Isaiah. In some 300 pages of most any translation of the NT there are over 400 quotes, paraphrases, or allusions to Isaiah.” (p. 13) Even in this count, it is likely that we have missed some, the book was that important in the first century Jewish community and the early Christian church. Direct quotes are only the tip of the iceberg. For the Jew or Christian with a “Scripture-saturated way of thinking” paraphrases or allusions to Isaiah came automatically to mind. It is one of the best preserved books we have, with virtually the entire book in the Great Isaiah Scroll from Qumran (ca. 150 BC).

Jesus read Isaiah. Not as a proof text, but because the book was and is important. This alone should make the Isaiah worth careful consideration – both in its own context and in the way it is used by the Jesus, the Gospel writers in the letters of Paul, Peter, and James and in the book of Revelation. The NT use of Isaiah does not stand in a vacuum – with a new significance unattached to the original meaning of the book. Ben Witherington works through this in his book, “trying to understand its meaning in its original contexts first, before then asking and answering the question of how this same material is used by Jesus and the writers of the New Testament.” (p. 10)

We will join with Ben and consider the book of Isaiah and the echoes and allusions to the book in the New Testament.

What strikes you most about the book of Isaiah and the way it is used in the NT?

The link to the book above is a paid link. Go with this one if you prefer: Isaiah Old and New: Exegesis, Intertexutality, and Hermeneutics.