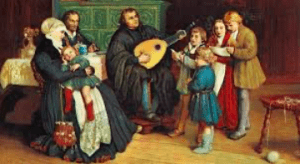 While walking under the starry sky in a snowy woods just outside Wittenberg on a bright moon-lit night, Martin Luther was so overtaken by the glorious scene that he determined to recreate it inside his home, the Black Cloister. He chopped down a fresh blue spruce, brought it inside and attached lighted candles, their flames reminding him of the lovely stars in the sky. And thus began a long tradition of houses burning down during the Christmas season.

The Puritans of Massachusetts Bay outlawed Christmas celebrations. They had house fires but not due to lighted candles on indoor trees. They fought wars with the Indians. So did other colonists. But they were the first Americans to wage war on Christmas.

The Luther legend is delightful, and I’m loath to abandon it. So also the text to the Christmas lullaby, “Away in A Manger,” long known as “Luther’s cradle song.” Problem is, it first appeared in America in 1882, wrongly attributed to Luther. “No German text for the carol has been found from earlier than 1934,” writes Kerstin Weidmann, which was “more than fifty years after the first English publication. That German text reads awkwardly, and appears to be the result of a translation from the English original.”

But all of this is surely not to suggest that Luther did not make the Christmas story a significant aspect of his biblical theology whether in songs, sermons, essays or letters. His best-known Christmas carol is “From Heaven Above” written in 1535. The setting is sweet. His young children were planning a little pageant to perform and asked their father to write a song for it. “Luther was a good sport,” writes Weidmann, “and quickly came up with a whopping 15 verses, which tell the Christmas story told from the perspective of the angels in the field.” Here are the first three verses:

From heaven above to earth I come

To bear good new to everyone;

Whereof I now will say and sing:

To you this night is born a child

This little child, of lowly birth,

Shall be the joy of all the earth.

Within my Heart, that it may be

A quiet chamber kept for thee.

“By example and precept alike,” writes George Prentiss, Luther “taught [his congregation] to fall down and worship the divine Babe in the manger. How he delighted in the gospel of the holy Nativity!” This emphasis was part of his mindset to the very end. In fact, eleven days before he died, he wrote a letter to Katie, scolding her for being so worried about him. True, he had been ill while away tied up in meetings, but how could anything go wrong? “I have a better guardian than thou and all the angels. He lies in the manger and hangs on the breast of a virgin; but sits none the less at the right hand of God the Father Almighty. Therefore be at peace, Amen”

Devotion to the Virgin Mary was part of Luther’s upbringing as well as during his years in an Augustinian monastery. Mary with the infant Jesus were not reserved for the Christmas season. But he turned this emphasis on its head by focusing almost entirely on the baby in a manger. Here we have an excerpt from a sermon on the Nativity that he preached in 1530:

If Christ had arrived with trumpets and lain in a cradle of gold, his birth would have been a splendid affair. But it would not be a comfort to me. He was rather to lie in the lap of a poor maiden and be thought of little significance in the eyes of the world. Now I can come to him. Now he reveals himself to the miserable in order not to give any impression that he arrives with great power, splendor, wisdom, and aristocratic manners.

My favorite Christmas sermon of Luther’s is one that is quoted in part by Roland Bainton. And here I move into an excursus on Bainton. He is best known for Here I Stand, a book on Luther that sold more than a million copies (first published in 1950), but for my money, the film “Where Luther Walked” is the best—now sold in DVD (Amazon Prime for 99 cents). This delightful Yale Divinity School professor died just before his 90th birthday in 1984. The filming was done two years earlier. He looks and sounds all of his 88 years, with superb on-location backdrops. One reviewer commented: “Wonderful cinematography. Roland Bainton is perfect for the part.” Bainton quotes Luther’s sermons in a most engaging way, with his own paraphrased translation from Here I stand:

The pictures always show Mary riding on a donkey, but there’s no donkey in the Gospels. She who might have gone in a golden chariot, with angels to attend her, went on foot, and trudged her weight across the snow of the Galilean and the Judean hills. And as they approached Bethlehem, Joseph was saying, “Oh, it will be all right.  Soon we’ll be among relatives and we can borrow everything.” A fine idea that was!

Her time came as they were drawing near, and Joseph sought room for them in the inn. But there was no room in the inn. Of course there was! There was all the room in the inn, but nobody would give up a room! Shame on you, wretched Bethlehem; you should’ve been burned with brimstone!

And don’t let you people in this congregation think you’d have done any better if you were there. I can just hear you say, “Oh, we would have loved to take care of the Baby Jesus. We would have washed his diapers.” No you wouldn’t!  If you’d been there you wouldn’t have done a bit better, and if you think you would, why don’t you do it for your neighbor in your midst, who is Christ among you? . . .

Mary and Joseph were obliged to take refuge in a stable, to share with the cattle, lodging, table, bedchamber and bed, while many a wicked man sat in the hotels and was honored as lord. . . .O what a dark night this was for Bethlehem, that was not conscious of that glorious light! . . .

“And she brought forth her firstborn child, and laid him in a manger.” Think of it, women! She didn’t even have a cradle to lay the baby in. She didn’t have anything. No warm water, no cold water, no pan, no towels, no table — nothing that our German women have at such a time. It’s a wonder the little fellow didn’t freeze to death. . . .

I wouldn’t have believed. If I’d been God and wanted to save the world, I wouldn’t have done it that way. I would have just called in the devil and twisted his nose and said, “Let my people go!”

But God is amazing. He sends a little baby, as weak as an earthworm, lying in the feedbox of a donkey, and that little baby crunches the devil’s back and overcomes all the power of Hell, and sin, and death.

I’ve seen renditions of Luther in films, but no one has captured him so credibly, at least in my mind, as has Bainton. His book, Here I Stand is not just for historians. That work should be in all our libraries. And “Where Luther Walked” is a most memorable film on Luther. We get to know Luther much better, and at the same time, we greatly admire that dear old man Roland Bainton. [#ad]

December 17, 2019 The Three "R's" of Justification
Recent Comments
0 | Leave a Comment
"Curious as to why my comment was deleted? Here it is again for all who ..."
zfari Go Home or At Home?
"From my experiences, a God who has a Gender, a Sex, and a Biological Orientation... ..."
Kyllein MacKellerann What to Say When Someone says ..."
"What is the "final destruction of sin" please?"
Bob Shiloh What to Say When Someone says ..."
"Dr. Fitch, you write the following regarding the resurrection:Of course, Cone is focused on the ..."
J.R. Miller David Fitch, James Cone: Liberation Theology ..."
Browse Our Archives
Related posts from Jesus Creed