Myth: Singleness is a Special Calling 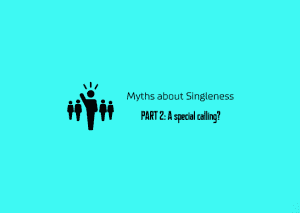 Myth: Singleness is a “special calling”

Around the time I was 17-18(ish), I became convinced that I might be “called” to singleness and celibacy for life. I’m not sure what first stirred the idea in me, but I was zealous about it. I started wearing my purity ring (remember those?) on the ring finger on my left hand, where a wedding ring “should” go. When people asked if I was married, I would take share about my commitment to celibacy. I was “married to Jesus” or “married to the Church.”

Fast forward a few years, and things had changed. Now I wanted to find a girl, to get married, to have a family. I was searching desperately for someone. I’d keep a running inventory of eligible bachelorettes at our church, weeding them out first by physical appearance, then by Facebook stalking, and only after they passed those two tests by maybe actually having a conversation with them. (This may be common practice, but it’s pretty twisted when you think about it.) Usually these conversations were no more than a few awkward greetings and clumsy small talk, but I’d inevitably find myself on the emotional roller coaster of reading layers of meaning into every smile, every glance – every ambiguous scrap of microscopic body-language evidence.

This didn’t just happen at church – it was everywhere. I may have set a standard that I only wanted to be with someone who shared my faith, but as long as I knew they met that requirement, the vetting process felt as natural as breathing. I would run every girl I saw through my own internal candidacy test when visiting other churches, going to conferences, prayer meetings, camps and retreats, even just hanging out with different friend groups. The analysis would kick in immediately, the evaluations became almost automatic, and the tension was thick.

Singleness isn’t a special calling. In fact, it’s the most common, ordinary, “un-special” calling in the whole Body of Christ!

The funny thing is, both of these seemingly polar opposite stages of my life – the passionate commitment to lifelong singleness and the constant scanning for potential partners – were foundationally rooted in one of the most pervasive and toxic ideas the Church has about singleness: that it is a “special calling” which is (almost) always a lifelong commitment. In other words, if you’re not called to singleness for your whole life, then you had better be actively searching for someone.

The way I talked about my singleness when I was a teenager was rooted in this idea. I had to decide – and commit! – right then, at 17 years old, if my Facebook status would be “single” until the day I died. Or at least until Facebook finally followed in the footsteps of Myspace and Xanga (RIP) and was laid to rest.

When I moved away from the idea of lifelong singleness, I still held this false belief that singleness must be a special calling. Since I was no longer 100% certain about my commitment to celibacy forever and ever – ‘til death do me, myself, and I part – that meant I must be destined for marriage. And that meant I must be on the lookout.

Fact: Singleness is for everyone

After an embarrassingly long time, it occurred to me: singleness isn’t a “special calling!” I think it took so long because, sadly, I feel like I’m the first person I know to have this (entirely uncreative) idea. Singleness isn’t a special calling. In fact, it’s the most common, ordinary, “un-special” calling in the whole Body of Christ!

As a Body, Paul says, we’ve got lots of different roles, gifts, talents, skills, strengths, weaknesses, vocations, and even “callings.” But singleness is not a niche in the Christian market. Unless you enter the Church after you have already found a partner, singleness is one of the only things that every Christian is called to! Healthy, whole, vibrant singleness is the domain of everyone for at least some part of their life. Whether it’s for a long time or a relatively short one, we all are single at some point.

In no way am I denying that there is a place for a genuine calling to a lifelong or long-term commitment – or even vows – to celibacy and singleness. But I want to set that aside, push back against the narrative that says that is the only option, and shake the dust off a very old idea that for unfortunate reasons probably feels very new to us today: singleness is for everyone.

Whether you are old or young, married, divorced, engaged, dating, or (of course) single, you have a responsibility to think deeply about this very fundamental idea. Because whether it’s for yourself, your single friends, your kids, or a widowed family member, you have to be able to grasp what it means for a person to live a vibrant, healthy life of singleness. Because you also have a part to play in their relationship status: they need you. We need you. I need you.

Unless you enter the Church after you have already found a partner, singleness is one of the only things that every Christian is called to! (Click to share on Twitter)

So my advice to singles is: don’t believe this dualistic lie. Keep growing into wholeness as an individual in community, and don’t let yourself get bogged down by the narrative that says if you aren’t called to be single for life, you must constantly be searching.

And my advice to non-singles is this: stop reinforcing this dualistic lie by constantly asking the singles in your life about their current relationship status. Stop trying to set them up with every other single person you see. And help them grow into wholeness by welcoming them with open arms into the community, just as they are, without increasing the pressure they already feel by the culture around them.

Corey Farr is a graduate of Northern Seminary. He is currently located in the Middle East in Lebanon, a tiny country next to war-torn Syria, where he lives and works on-site at a residential facility and elementary school for both Syrian and Lebanese orphans and children at risk. A singer-songwriter and wanna-be author, Corey blogs about faith, spirituality, and poetry at www.coreyfarr.com.

December 31, 2019 Humor as Theology
Recent Comments
0 | Leave a Comment
"Curious as to why my comment was deleted? Here it is again for all who ..."
zfari Go Home or At Home?
"From my experiences, a God who has a Gender, a Sex, and a Biological Orientation... ..."
Kyllein MacKellerann What to Say When Someone says ..."
"What is the "final destruction of sin" please?"
Bob Shiloh What to Say When Someone says ..."
"Dr. Fitch, you write the following regarding the resurrection:Of course, Cone is focused on the ..."
J.R. Miller David Fitch, James Cone: Liberation Theology ..."
Browse Our Archives
Related posts from Jesus Creed