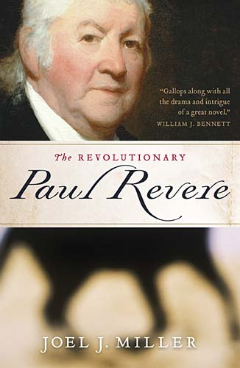 “Gallops along with all the drama and intrigue of a great novel.”
–William J. Bennett, author of America: The Last Best Hope

He’s famous for the ride, but he’s essential for so much more. The story of Paul Revere is the story of the American Revolution. Always smack dab in the thick of things, Revere was an ordinary citizen living in extraordinarily turbulent times. He played key roles in colonial tax fights and riots, the aftermath of the infamous Boston Massacre, the Tea Party, the Battle of Lexington and Concord, and even the ratification of the U.S. Constitution.

“The story of Paul Revere–a hero of Massachusetts, a hero of America–was never more timely. Nor has it ever been better told than by Joel J. Miller. The Revolutionary Paul Revere gallops along with all the drama and intrigue of a great novel, highlighting what makes Revere so essential in the story of America’s founding and its growth as a force fro freedom in the world. This is a vibrant, vital, and wonderful story.”
William J. Bennett, author, America: The Last Best Hope