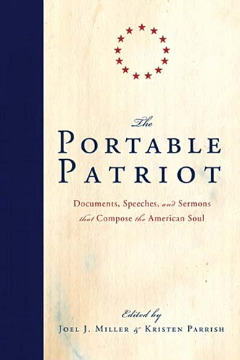 What does it mean to think, believe, and act like an American? Too often reduced to a mythic set of lofty ideals, the soul of America is far more than a concept — it is a people. But even the most sacred principles mean very little unless lived out passionately by an informed citizenry. The Portable Patriot assembles American history’s most formative words, written by the people who were making that extraordinary history.

Speeches and sermons, essays and extracts, poems and proclamations illumine values like virtue, humility, thrift, independence, and prayer. Among other pieces, The Portable Patriot features:

“Nothing ignites a patriot’s heart — or the hope that the truths of our founding era will prevail again — like the documents assembled in The Portable Patriot. How grateful we should be, and how quick to make these historic words our own.”
Stephen Mansfield, author, The Forgotten Founding Father and The Search for God and Guinness