Make Magic of Your Life 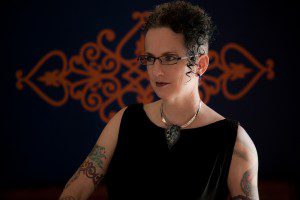 “Grace is the unexpected that arrives when you have prepared, yet remain open.” – T. Thorn Coyle

I first met Thorn Coyle at the House of Danu Gorsedd in 2009. We had a brief conversation and I bought one of her CDs. When I got home I started listening to her podcasts. That’s where I developed an appreciation for her spiritual depth and her emphasis on this-world action – something that appealed to me as a Unitarian Universalist as much as it appealed to me as a Pagan.

When I went back to the Gorsedd in 2010, Thorn was teaching a workshop on ecstatic ritual and leading the main Lughnasadh ritual. Both the workshop and the ritual were excellent, and though Thorn was quite humble about her contributions to the ritual, I recognize good priestwork when I see it – this was some of the best I’ve seen before or since.

In early 2011 I found myself on a spiritual plateau. I had just come out of 18 months of extreme stress at work and a necessary period of rest and recovery was turning into boredom. I felt a spiritual calling but I didn’t seem to know how to answer it. I needed help – expert help. I needed a spiritual director. But not just any spiritual director – I needed someone who spoke my language and who understood what I meant by being called to be a Druid and a priest.

I turned to Thorn and began her spiritual direction program. We had phone calls every other week and e-mails in between. She pushed me for more and deeper spiritual practice. She asked questions that seemed generic but forced me to think about things I didn’t want to think about. She encouraged me to write in my journal more regularly.

It was nothing special. There were no magical secrets, no powerful rituals, no long list of things to do. It was so ordinary I wondered if I was getting my money’s worth.

But then things started happening. I made a connection with the core of my being that has only gotten stronger. My occasional evening prayers became every evening prayers, then four times daily prayers. I picked up my exercise routine and while I didn’t lose any weight, I felt great. I got a request to speak at another UU church in the area. I got an invitation for a writing project. That Summer I would begin studying for ordination.

Thorn’s magic was working. It wasn’t mystical or spooky or flashy. It just worked. 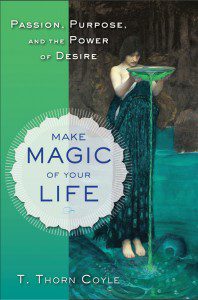 And that brings me to Thorn’s new book Make Magic of Your Life: Passion, Purpose, and the Power of Desire. When Managing Editor Christine Kraemer asked if I’d like an advance copy to review, I gave her a quick and unqualified response: yes!

The book is a meditation on the Four Powers of the Sphinx as originally articulated by 19th century ceremonial magician Eliphas Levi: to Know, to Will, to Dare, and to Keep Silence. Thorn adds a fifth power, to Manifest, which follows the first four. She covers desire and how we come to Know, Will and how it must be exercised and trained like a muscle, goals and how to Dare in spite of our fears, and the necessity of Silence and leaving room for mystery. She covers what happens when our magic Manifests, dealing with the changes brought by success, and how the completion of one desire flows into the beginning of another.

The book is solid, the advice is sound, and the practices are proven. But it wasn’t what I was expecting, or perhaps, what I was wanting. Now, the core concepts come from a classical occultist, there are stories of various gods and goddesses, each section includes rituals to perform, and there are numerous references to Thorn’s beloved teachers Victor and Cora Anderson, the founders of the Feri tradition. But even with all that, it didn’t feel, well, magical.

Perhaps it’s the many this-world examples. Perhaps it’s the quotes from the Wise Council, most (though not all) of whom are best known for non-magical work. Perhaps it’s the encouraging but down to earth language. I couldn’t help thinking “Thorn has written a self-help book.” I was so disappointed.

But as I read deeper into the book I found myself remembering my own desires and seeing how they had manifest themselves in much the way Thorn was describing. I found myself examining how my practice is becoming a ministry and the resistance I’m feeling to that shift, and I picked up ways to deal with that resistance. I recognized some unnamed fears and saw ways to overcome them.

And when I realized what I was doing, I laughed. This is no self-help book. This is a manual for practical magic.

So who should read Make Magic of Your Life? Anyone seeking your True Will, trying to figure out what you’re supposed to be doing with your life. Anyone who knows her True Will and is trying to figure out how to go about living it. Anyone who is living out his destiny and needs some help getting past obstacles. Anyone like I was two years ago, who feels stuck and needs help getting moving again.

Anyone who’s skeptical about magic but willing to approach it with an open mind.

But if you do the work, expect the magic to work.

Make Magic of Your Life: Passion, Purpose, and the Power of Desire

by T. Thorn Coyle
256 pages
available in paperback and as a Kindle e-book

Watch an author video with T. Thorn Coyle and read more responses to Make Magic of Your Life at the Patheos Book Club! 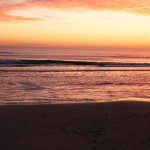