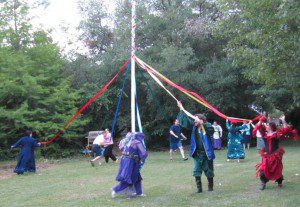 I’m a strong proponent of group practice and worship. While there is no substitute for regular personal spiritual practice, there is also no substitute for the fellowship, encouragement, reinforcement and accountability that comes from being in community with like-minded folks. And there are things you can do in a group you can’t do alone: you can’t do a spiral dance by yourself and one person can’t raise the energy that thirty can raise.

I know a few people who are die-hard solitaries and successful at it, so I’ll admit there are some people who are best served by the myth of the witch living alone in a cottage deep in the forest. But the exceptions do not disprove the general rule – humans are social animals and most Pagans are better off in a good group.

Of course, we’re all better off solitary than in a dysfunctional group, but that’s another rant for another time.

My local hands-on group is Denton CUUPS, a chapter of the Covenant of Unitarian Universalist Pagans. I first went there ten years ago when I was looking for a group, intending to make it my first stop in a “group shopping” process. Instead, I never left. I’d love to have an OBOD grove nearby, but CUUPS is my home. This is where I honor the gods, celebrate the seasons, and work with others to learn, grow, and build a better world. This is also where I’ve met some of my closest friends.

A CUUPS groups is not a coven, grove, or lodge. A CUUPS group is a UU covenant group and by definition it is open to all who are in agreement with its principles and who support its mission. Some CUUPS groups have a very loose membership definition, but Denton CUUPS has found it’s better to require people to formally join the group. We welcome all who are interested, but we don’t want you to join unless you’re serious about being an active member.

Recently I’ve had several people express reluctance to join because “I don’t know nearly as much as all of you.” I’ve given one response to all these people: “we want you.”

Yes, we have some very experienced folks in this group. We also have some very new folks. When we’re camping, or picking up trash, or trying to coordinate our calendars for a movie night (which we need to do again some time soon), none of that matters. In ritual, there are simple parts and there are not-so-simple parts – ask for what feels right to you. Want to lead a circle but don’t know how? Assist someone else a time or two, then have someone assist you – this is an opportunity to learn by doing. Don’t want to lead a circle? That’s fine too.

We don’t have a dedicant program. That means we don’t have a formal training program we can hand you. It also means we aren’t tempted to force you into a box that may not fit you well. Explain what you’re interested in, describe who or what calls to you and we can probably point you in the right direction. And whether you end up in a structured program or a guided study or mentored study or solitary study, you still have to do the work. There is no substitute for doing the work. It’s just easier and more fun with others.

OK, John – that’s a nice plug for your CUUPS group. Now tell me what this has to do with Patheos Pagan readers who don’t happen to live in North Texas?

The process is the same no matter where you are, spiritually or geographically. Unless you’re the rare bird who really is the Witch In The Forest, sooner or later you’re going to reach the end of what you can accomplish on your own. Continuing your learning and spiritual growth will require a group – for a while if not forever.

Unlike the situation even 20 years ago, it’s pretty easy to find a group these days, at least if you live in or near a metropolitan area. The internet and social media have enabled more groups to form, which improves your odds even more. There are numerous virtual communities which, while not the same as a physical community, can provide some of the benefits no matter where you live. If you want a group, start looking!

Maybe you’ll be like me and find what you’re looking for on the first visit. Maybe you’ll have to test drive two or three or ten to find the right group. But when you find a group that fits your needs and your personality, ask about the membership process.

Don’t be afraid to ask for what you need. Don’t be intimidated by experienced members – and if any of them are trying to intimidate you, find another group. The clichés are clichés because they’re true: everyone was a beginner at one point and you’ll never get anywhere if you don’t start. Most groups welcome seekers who are seeking to find instead of merely seeking something new and different.

For more advice on finding and settling into a group, check out Sable Aradia’s post on the Agora blog titled Seekers and Guides: Covening for Beginners.

Our Ostara Circle is Saturday night. I’m hoping we end the evening with a few more members on the roll. 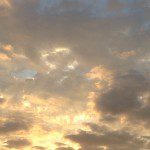