Government Shutdown and the Willow Pentagram

I have two very Pagan-oriented posts in the works:  a review of a provocative book that just needs some editing and a piece on the Goddess Danu requested by a friend that still needs a bit more research.  But I’m so angry about the government shutdown I can’t seem to work on either of them right now.

There are plenty of places where you can read political analyses and rants.  So for a change I’m going to take my own advice and attempt to return to center.

First, do no harm.  I’m angry, but I’m not scream-and-throw-things angry.  I’m not likely to cause any harm to myself, to anyone else, or to do anything that will make the situation worse.

On the other hand, this anger is distracting me from productive work and this state of agitation is both unpleasant and unhealthy.  That’s more motivation to work through it and return to center.

I’m a political moderate and a political realist – I understand that in a democracy, elections, legislation and court rulings don’t always go the way I think they should.  Political loss is reason for disappointment, not anger.  But it is reasonable to expect that government will do what it said it would do and when it doesn’t I get angry.

I’m angry and I own my anger.  It’s what I feel and I won’t deny it or downplay it.

Accept what is.  The idealistic youth who still lives inside me doesn’t like this step – it feels like giving up.  But fighting against a tornado is unlikely to yield favorable results.  Likewise, there are powerful forces at work in the political and economic arenas and we do ourselves no favors if we pretend they don’t exist.

The American empire is in decline, just like every empire that preceded it, and every empire that will follow it.  We’ve run up against soft limits – we can still do anything we want, we just can’t do everything we want.  As we move down the long descent, as resources are depleted and as other nations and other empires demand their share, the sum total of what we can do will continue to shrink.

The rich and powerful will do everything they can to remain rich and powerful – and what they can do is substantial.  The middle class – what’s left of them – will cling to the status quo rather than risk something new and different.  The mainstream religions will continue to offer charity instead of justice and spiritual opium instead of transformative experience.

Even if this shutdown is resolved quickly and the Affordable Care Act is implemented on time, this trend will continue.  As soft limits give way to hard limits – the amount of oil in the ground, the amount of fresh water available, the amount of food that can be produced safely and sustainably – human greed will become harder and harder to keep in check.

This is what is.  You don’t have to like it – I certainly don’t like it.  But it is the environment in which we work, and we cannot deal with it effectively if we pretend the future will be fine if we can just put the right party in power.

Do what must be done.  The facts are the same for all of us, but each of us must respond in our own way.  We all have to pick our battles and politics is an arena in which I am not likely to prevail.  I will vote and I will advocate as seems useful, but in the end I’m not a politician, an activist, or an analyst.  I’m a Druid and a priest.

I must continue building and supporting my tribes.  The power of collective identity and collective action is great, and while no tribe has the resources to do what the federal government can and should do, there is much we can do for each other on a person to person and family to family basis.  As the empire continues to decline, the support we can count on from institutions will decline with it.  Those who build strong networks of mutual aid will do well.  Those who attempt to be lone wolves will discover the limitations of even the strongest and most rugged individuals.

I cannot defeat the tribe of the rich and powerful, but I don’t have to.  I simply have to make them irrelevant to me and mine.  Success does not depend on ever-increasing material wealth.

Return to center.  I am a Druid and a priest.  I pray, I meditate, I make offerings.  I tell the stories of my gods and goddesses.  I honor Nature and the spirits of Nature.  I read and study and lead ritual. 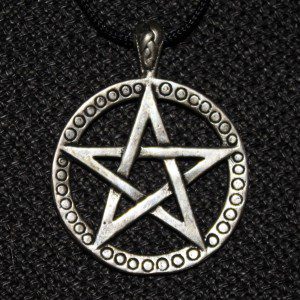 The Willow Pentagram.  This abbreviated process of dealing with frustration is one method for returning to center.  I call it the Willow Pentagram.  There are five steps – each one is a line connecting point to point, forming the five-pointed star.  Like the willow tree it does not ask us to stand stone-like in the face of unfavorable winds, but rather to turn and bend while remaining rooted in the Earth.  And like the pentagram of esoteric practice, it banishes unhelpful energies and invokes the good.

I’m still annoyed by the government shutdown and I will remember this dereliction of duty at election time.  But after working through the Willow Pentagram I’m no longer obsessed by anger.

Time to get back to work. 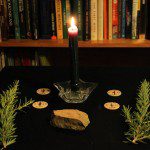 September 29, 2013
Do the Work and Trust the Process
Next Post 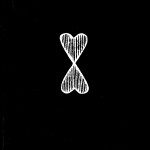 October 3, 2013 Apocalyptic Witchcraft
Recent Comments
8 Comments | Leave a Comment
"Following up to my last observation: the only recorded festival in Scandinavia at this time ..."
Ingeborg Nordén Is it Lughnasadh without Lugh?
"John your one of my favorites keep up the good work. I don't always comment, ..."
chuck faircloth 13 Year Blogiversary of Under the ..."
"Normally I wouldn't even consider a book on Heathen magic. Not because there's anything wrong ..."
MadGastronomer Elves, Witches & Gods
"Thank you for this - I found this article after reading "5 Ways to Get ..."
DMDaniels A Magical Challenge
Browse Our Archives
get the latest from
John Beckett
Sign up for our newsletter
POPULAR AT PATHEOS Pagan
1