I hadn’t intended to write on Pagan unity – or the lack thereof – any time soon.  But I’ve seen a lot of chatter on the topic in the past week – it seems like the time to chime in.

I’m not going to link to a bunch of people on this, mainly because I don’t want to take the time to look up quotes.  Suffice it to say the complaints fall into two main categories.

1) Someone attempts to define Paganism and someone else complains “your definition excludes me.”

2) Someone assumes a definition of Paganism, decides he or she is sufficiently different, then proclaims “I’m not Pagan.”

Let’s start with a couple of basic principles.  First, every person has the right to choose his or her own identity and his or her own labels.  If you want to call yourself a Pagan, a polytheist, a Druid, a Nature worshipper, an occultist, whatever, that’s your business.  Further, every person has the right to choose who he or she will associate with.  If the fine points of your religion are so critical you must set yourself apart from this group or that group, again, that’s your business.

I prefer a Big Tent approach to Paganism – a big tent with four main posts.  Some of us are right in the middle, some cling tightly to only one post, while others are in one of the corners.  Some people are close enough for me to see them but not close enough for me to tell if they’re actually under the tent or if they’re standing outside.  What about Green Christians?  I think they’re outside, but their fundamentalist brethren over in the next camp think they’re standing right in the middle of us.  What about the Kabbalists?  I think they’re in, but many of them say they’re only in the Jewish tent.  The Hindus are over in that corner – some of them are insistent they’re in our tent and others are just as insistent they’re not.

Complicated?  Yep.  Messy?  Sure is.  Living, growing, reproducing organisms are like that.

The problem with big tents is, well, they’re big. Try to embrace the whole tent and you can find yourself bouncing back and forth between pouring libations to Zeus, protesting fracking, organizing the Beltane picnic and meditating on The Fool.  Those are all worthwhile things to do, but they can lead to a personal religion that is the proverbial mile wide and an inch deep. That’s a problem – if you’ve been reading Under the Ancient Oaks for any time at all you know one of my favorite soapboxes is the need for spiritual depth.

This isn’t just a problem for individuals – it’s also a problem for Pagan religions.  I think we pretty much agree that while we are inspired by our ancient ancestors, what we’re doing right now is new.  It’s a response to our circumstances, our problems, and our needs.  It may be more than that – perhaps much more – but it’s at least that.  We’re trying to figure out how best to respond to the religious impulses and calls we feel, and we’re responding in different ways.

Our spiritual growth is coming through depth, not through breadth.  It isn’t coming through “Paganism” – it’s coming through witchcraft and Druidry and Heathenry and ceremonial magic and Dark Green Religion.  All the folks who are saying “I’m really more of a <fill in the blank>” are absolutely right.

If that was all there was to it we could forget the Pagan label.  But it isn’t, so we can’t.

What we offer – through all four centers of Paganism – is something many people need and want.  Separately, none of us have a strong enough signal to get through the noise of the dominant religion and the dominant culture.  Together, though, we have a fighting chance.

I can’t think of a better example than the Pagan Channel here at Patheos.  Among the regular bloggers we have a Wiccan, a Druid, a Voodoo priestess, and a Humanistic Pagan.  Do we have some commonalities?  Of course we do.  Do we have some differences?  Absolutely.  Would I feel comfortable at one of the other folk’s rituals?  Probably.  Would I want to do their version of ritual all the time?  Absolutely not.

Here’s the thing:  Patheos isn’t going to invest the resources to create a Druid channel and a Wiccan channel and a Voodoo channel – there isn’t enough traffic to justify it.  But together, we’ve got a nice home – and on the front page, we get equal billing with the Evangelicals and the Catholics and the Muslims and everyone else.

Maybe they find the Pagan channel.  Maybe they find Pagan Pride Day.  Maybe they find the Covenant of UU Pagans.  Some will learn a thing or two and move on to something else.  But others will stick around.  Eventually, they’ll find their way to one variant of Paganism or another and start digging deeper.  But they can only do that if we have a strong enough signal for them to find us.

Ultimately, what tent you choose is up to you.  But just because “Pagan” isn’t your primary identity doesn’t mean there’s not a place for you in the Big Tent of Paganism.

Pagan unity isn’t about forgetting our philosophical and theological differences and doing the same Wicca Lite ritual on the Solstice.  Pagan unity is about working together respectfully to advance our common interests and boost our common signal while we explore our individual traditions in depth. 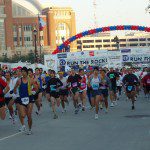 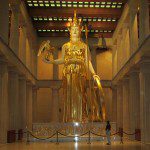 December 17, 2013 Wrestling With The Gods
Recent Comments
28 Comments | Leave a Comment
"Agree 100%."
Falconlights Who Put the Odal Rune on ..."
"You may think that, but it's not at all how it's actually used."
MadGastronomer Who Put the Odal Rune on ..."
"Good people do bad things and bad people do good things. What is light without ..."
Stuart Jeffery Must We Speak No Ill of ..."
"Notorious RBG! I love that nickname! Someone once asked her, "When will there be enough ..."
Amanda Ingalls The 6 Celebrity Deaths That Impacted ..."
Browse Our Archives
get the latest from
John Beckett
Sign up for our newsletter
POPULAR AT PATHEOS Pagan
1