Why I Worship the Gods

Why do we worship the Gods? Should we worship the Gods? What do we mean by “worship” anyway? None of the Gods of our ancestors are perfect and many of Them have done things we modern Westerners find troublesome at best. The last post Thinking About the Gods sparked some rather passionate debate on this topic.

I’d like to offer a deep, robust, theological response to all those comments. I can’t – Pagan theology (or at least, my Pagan theology) isn’t there yet.

What I can offer are my own practices and my reasons for them. This is why I worship the Gods, and why I think that’s a good thing even if the Gods aren’t always as pleasant as we’d like them to be.

“Because They’re Gods” isn’t good enough. I know some very devout polytheists who simply say that because the Gods are Gods – because they are so much more than humans – they are inherently due our worship, or at least our honor. I respect that view, but I don’t share it. Maybe it’s my own baggage, but that reminds me too much of Calvinists who argue that since their God made everything (or so they think) he can do anything he likes with it, including casting billions of his creatures into eternal torment, and our only response should be to keep telling him how great he is.

That kind of thinking is one of the things that drove me out of Christianity and I don’t want to bring it into my Paganism. I may not be able to fully articulate what is good (a question philosophers have been struggling with for several thousand years), but whatever good is does not depend on the whims of a superior being.

The Gods’ greater age and wisdom gives Them a perspective we do not share. That leads me to defer to Them in cases where I have incomplete information. But even when I do, I’m trusting Them because They’ve shown Themselves to be trustworthy, not simply because They’re Gods and I’m not.

What is worship, anyway? Arguing from the dictionary is usually a losing strategy, but sometimes it’s helpful to look at the origins of a word. “Worship” comes from the Old English weorthscipe meaning worthiness and respect – to worship is to declare something or someone worthy of honor. Compare that simple meaning with the commonly-held idea that worship is all about self-debasement and chanting sycophantic praises to an insecure deity.

The mechanics of worship are another post for another time. The essence of worship is affirming that the Gods are worthy of our honor and respect. Good worship creates, maintains, and strengthens relationships between us and the Gods.

I don’t worship every God. I am pledged to two Gods and I honor many, but I do not worship every God. Most I simply can’t get to, any more than I can call the names of every ancestor back to the first human. But some I actively choose not to deal with.

I don’t worship Set. I acknowledge Him as one of the Neteru, the Gods of Egypt, but that’s where I stop. He has some positive characteristics, but He murdered His brother Osiris, and He is best known as a God of the desert (which is inhospitable to humans) and of disorder.

I don’t worship Loki. I’m not a Heathen and I have no opinion as to whether or not Loki is an oathbreaker. But He’s a trickster God and I prefer life to be as orderly as possible. Trickster Gods are notorious for inserting Themselves in your life whether you want them there or not, but I’d rather not invite him – or Eris, or Coyote – to throw a banana peel under my feet.

We can’t control Who knocks on the door. We can control whether or not we open the door… most of the time, anyway.

That we usually have this option is worth contemplating as we develop modern Pagan theology.

I’ve had good experiences with the Gods. The Gods have been good to me. If you want to boil it all down to one line, that’s why I worship Them.

The God of the Forest comforted me when I was a small child seeking refuge in the woods. He called me when I was ready to see Him for who He really is. He’s given me moments of ecstatic communion, and a couple of sheer terror that let me know I was dealing with Someone very real.

She didn’t break my bones. She didn’t withdraw from my life, at least not completely. But it’s very clear that in saying no I passed up a tremendous opportunity… but an opportunity to which I would not be well-suited, no matter how much part of me would like to do it.

My good experiences have not all been pleasant. Many of them have been challenging, and not in a “trust us – we’ll catch you if you fall” controlled exercise. More in a “that sucked, but I’m still alive” sort of way. Sometimes something unpleasant just needs to be done and I happened to be the right person at the right time to do it.

Good and bad, I would not trade my experiences of the Gods for anything.

I want to be part of something bigger than myself. The Gods aren’t here for you or for me. They’re here for Their own reasons and Their own purposes. Sometimes They let us know what They’re up to. Sometimes They just say “go do this.” I trust that whatever “this” is, it’s necessary in the bigger picture… and I trust myself to say no if “this” is not in alignment with my ethics and values.

By participating in Their work, I’m an active part in something bigger and more important than myself. By participating in Their work, I’m helping to restore a religion and a culture that served my ancestors well before it was overrun by a religion that did some good things (and some bad) but has shown itself to be incapable of inspiring humanity to deal with its current and coming crises.

Worshipping the Gods strengthens my connections to Them and to Their work. It connects me to things that will be here long after I’ve left this life.

If you’re going to ignore Them or if you’re going to try to confine Them to a nice safe little box, then why bother with polytheism? Other religions are neater, cleaner, better defined and offer more advantages in mainstream society.

But if you believe the Gods are real, then the logical conclusion is to form relationships with them through the methods we have available to us: prayer, meditation, divination, sacrifice, contemplation, and yes, worship.

What will you worship? The Neoplatonists taught that our prayers and sacrifices rise up to the Gods where they are imbued with Their divine essence. That divine essence returns to the worshippers, making us a little more God-like ourselves.

Ralph Waldo Emerson said “a man will worship something … That which dominates will determine his life and character. Therefore it behooves us to be careful what we worship, for what we are worshipping we are becoming.”

Many in our mainstream society worship mindless consumption and vapid entertainment. Some worship money and power. Many worship their own egos. What are they becoming?

You, of course, must make your own decision. It is certainly possible to live a good, ethical, helpful life without worshipping the Gods. In many ways it is easier to live without Them, or at least without Their constant presence. They are not tame and the perils Morpheus Ravenna warned her readers about are very real. If you choose not to deal with Them I certainly understand.

But I wouldn’t have it any other way. 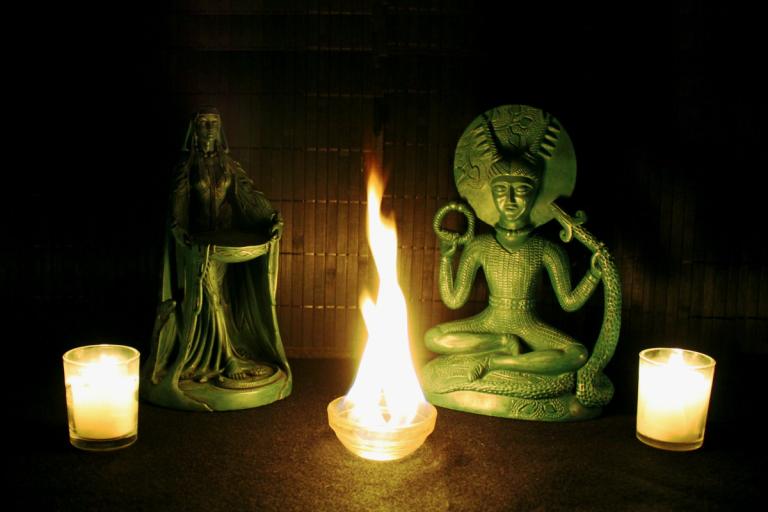 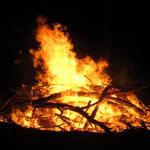 October 23, 2014 Sacrifice and the Fear of Real Gods
Recent Comments
0 | Leave a Comment
"There are many more Christians "who just want to celebrate the seasons" than the Archbishop, ..."
Diana Sinclair Paganism in a Post-Christian World
""When did I know I was a Witch?" After I studied, was instructed by Coven ..."
Kyllein MacKellerann When Did You Know You Were ..."
"Thank you for this elaborate answer. Between my comment in the other post and today, ..."
narya If You Want To Do It, ..."
"This is a very inspirational post. I like the concept of "do or do not; ..."
Donetta Sifford If You Want To Do It, ..."
Browse Our Archives
Related posts from John Beckett