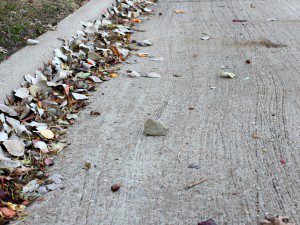 I never learned to ride a bicycle as a kid. We lived in what was then a rural area where the roads were dangerous for cars, much less bikes. Our driveway was gravel and steep, and these were the days before mountain bikes. My friends talked about Schwinns and ten speeds – I talked about walking in the woods and not having a place to ride a bike.

By the time Cathy and I got our first house, much of the rural area had been cut up into subdivisions with wide, smooth roads and minimal traffic. When my father – ever the Depression-era packrat – found an abandoned bike, I tried to ride it and found it was easy – and I liked it. I started riding fairly regularly and I tried to make up for what I hadn’t learned as a kid by reading about bicycles and bicycling.

One of the basic riding tips dealt with rocks and other road hazards. The advice was clear: don’t look at the rock in the road, look to the side of it, where you want to go. If you do what’s natural and keep your eyes on that thing you want to avoid, you’ll run right into it.

A lot of Pagans spend a lot of time staring at the rocks in the road. They think about the rocks. They tell anyone and everyone how bad the rocks are, and how they’re different from the rocks. And then they wonder why they keep running into the rocks.

We have plenty of bad examples in our culture. The media knows conflict and controversy mean ratings. They’ve forgotten that getting ratings isn’t the same thing as informing the public. Politicians know negative campaigning wins votes. They’ve forgotten that winning elections doesn’t result in effective governing. Is it any wonder the media and politicians have so little respect?

We can only speak in terms of what we know. When I look back at my journal from the early days of my Pagan exploration I see a lot of Christian concepts and Christian language. How could it be anything else? That was all I knew. Oh, I knew other religions existed, but I had no real understanding of them except how they compared to the low-church Protestant Christianity I had grown up with.

Realizing I was not-Christian (or more precisely, not-fundamentalist) was a start, but it was only a start.

When we focus on what we’re not, we allow the rocks in the road to frame the conversation. I was having a religious conversation with someone a while back and he kept asking “but how does Paganism say you get to heaven?” He assumed the purpose of religion was to prepare for what comes after death. It never occurred to him that perhaps the purpose of religion is to live a virtuous and even heroic life here and now.

When we focus on what we’re not, we play by their rules. This is why I never, ever argue from the Bible. As satisfying as it can be to show Bible-worshippers (see what I just did?) how their beliefs are inconsistent with the plain reading of the text they claim to endorse (much less with a mythical or a historically-informed reading), arguing from the Bible reinforces the idea that the Bible is a legitimate source of authority. It is not.

So how do we learn to look at the open road to the side of the rocks?

Explore. We can only start from where we are. If you just realized you’re not-Christian (or not-anything else) start exploring the wide diversity of the world’s religions. Not to see how they stack up against the religion you’re familiar with, but to discover their foundations and assumptions, their beliefs and practices, their values and virtues for yourself.

I frequently criticize the “spiritual but not religious” for being a mile wide and an inch deep, but when you’re starting out, it’s important to consider as many possibilities as necessary.

Learn. Hear what calls to you. Read about it. Talk to experienced practitioners. Think about what you’ve read. Ask questions – and listen to the answers. Think some more. Most importantly, question the unstated assumptions in all religions. Finding “correct” answers is rarely possible – figuring out if you can live with the assumptions is always helpful.

I went from being a not-Christian to being a vague deistic universalist, which wasn’t much better. I tried to be a Wiccan and it didn’t work for me. When I discovered Druidry, I knew this was where I belonged. Over the past ten years or so, my Druidry has grown increasingly focused on Gods, ancestors, and the spirits of Nature.

Practice. Regardless of which flavor of Paganism you end up with, remember that the primary focus is on what you do, not on what you believe. Meditate. Pray. Make offerings. Follow the sun and the moon. Spend time outside. Contemplate the values and virtues your practice teaches, and align your life with them.

Become. Religion – any religion – is inseparably intertwined with identity. Religions help answers the Big Questions of Life, including where do I come from? Who am I? And perhaps most importantly, whose am I? With whom do I belong?

In our mainstream culture, identities are often bought and sold. But these are merely masks we adopt and discard at our whim. Our identities are deeper and far more immutable. I didn’t decide to become a Druid because I thought it was cool or even because I thought it would be helpful and fulfilling. I decided to become a Druid because I was called to Druidry. My Druidry is an expression of my true identity.

The rocks are there – we can’t pretend they don’t exist. But we can keep our eyes on the open road of what we are – and of what we’re becoming. 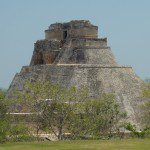 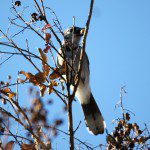 November 27, 2014 My Daily Thanksgiving
Recent Comments
0 | Leave a Comment
Browse Our Archives
get the latest from
John Beckett
Sign up for our newsletter
POPULAR AT PATHEOS Pagan
1