Should all polytheists have a patron deity?  Should we all be priests?  Are those of us who are called or claimed by a deity a higher grade of polytheist than those who aren’t?  Must we always obey the Gods or suffer great calamities?

I think every polytheist I know would firmly answer “no!” to those questions.  Some would include lectures about how the idea of individual patrons wasn’t part of many ancient polytheisms, while others would lecture about maintaining our sovereignty before the Gods.  But our actions speak louder than words.  Or in the case of the internet, the stories we tell carry far more weight than the theologies and philosophies we expound. 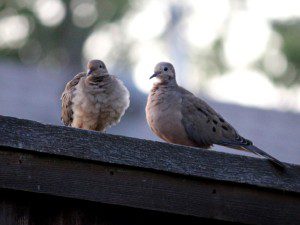 Regardless of where they come from, these ideas are prevalent in the wider Pagan world.  In a conversation last week I heard of someone who encountered a natural phenomenon and interpreted it as a call from a God.  The implication was that they wanted to be called and at some level felt like they needed to be called.

Another implication is that many of us need to get outside more, so we recognize when Nature is being mysterious and when Nature is just being Nature.  But that’s another post for another time.

Heathen blogger Molly Khan wrote about this last week in a post titled Is Modern Polytheism Anti-Choice?  She says

many modern Polytheists are stuck in a paradigm where a religious calling is only legitimate if the Gods or spirits are the ones doing the calling – and the more difficult this makes the life of the called person, the more spiritually attuned they must be.  I see this in many of the high-profile Polytheists online, many of whom will say that they didn’t have a choice but to honor and follow their patron deity.

Molly goes on to tell the story of her relationship with the Goddess Nerthus, a relationship Molly initiated herself.  She gives some very good advice:  “Find a deity you think is awesome and start honoring Them!”

I have experience on both sides of this issue.  Cernunnos has been in my life since long before I knew who or what He was.  When I was ready He presented Himself to me and my life has not been the same since – and that’s a very good thing.  He claimed me.

But I pursued Morrígan. 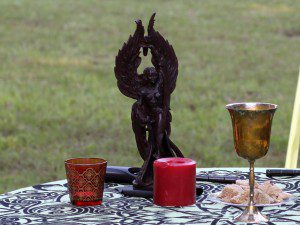 My relationship with Her began when Denton CUUPS invoked Her as a Goddess of Sovereignty in several of our rituals.  We invited, She showed up, we made offerings, She gave blessings, we said thank you, She left.  A couple years later, I had a friend in danger in another state.  I asked Morrígan to protect her – my friend was OK.  I made a second request for a second friend and again She helped.  After I made a third such request with a third successful outcome, She said “I have done this for you, now I want you to do something for me.”  This began an intense 18-month relationship that included numerous things She requested, including helping to initiate a priestess.

I am not a priest of Morrígan – for that She wanted something from me I could not give.  Or rather, what She wanted would change me in a way that goes against my core identity.  I declined.  But our relationship did not end.  I joke I’m Her “Druid on retainer” – but I’m not sure it’s a joke.  I keep getting pulled back into Her service – service I am honored to provide.

We are only a short ways into the Polytheist Restoration.  It is not surprising that the people who are out front are primarily those who have been called by the Gods – without Their inspiration and intervention, we wouldn’t be even as far along as we are.  Again, I think every polytheist I know would say it’s not because we’re somehow “special” but simply because we heard the call of the Gods and we responded.

I have no way to verify it, but I suspect many of the people who are interested in polytheism but claim to have never heard from a deity are in fact hearing Their call.  They just don’t recognize it because mainstream Western society has made us blind and deaf to mystery, to the Gods and spirits, and to everything else that doesn’t involve buying and selling.

So it falls to those of us who have a platform for polytheism to make it very clear:  pursuing the Gods is a good thing!  Read Their stories and read the scholarly work about the cultures in which They were originally worshipped.  Talk to Their priests and see how They’re being worshipped today.

Tell Their stories and invoke Them in ritual.  Speak to Them in prayer and listen for Them in meditation.  Build a shrine.  Make offerings.  Do Their work in this world.

Will the specific God you’re pursuing respond?  Maybe They will and maybe They won’t.  Polytheism presumes the Gods are individual beings with Their own goals and interests, likes and dislikes.  They are not demons to be commanded or psychological forces to be manipulated.  They make Their own decisions, for reasons that frequently aren’t clear to us.  But as Molly’s story of Nerthus and my story of Morrígan illustrate, pursuing the Gods usually works out well.

Besides, what’s the worst that can happen?  You learn some interesting stuff, meet some interesting people, do some helpful spiritual work, and do some good work in the ordinary world.  The downside risk is negligible, while the upside potential is tremendous.

Could you be claimed by a deity who wants you to do things you don’t want to do?  A casual survey of polytheists says that is possible.  But it’s important to remember most Gods have things They want accomplished.  If you aren’t able or willing to do that, it’s much easier for Them to find someone else who will than to harass you until you submit.

More common is a deity who sees more in you than you see in yourself.  They ask, push, cajole, and demand you do something you think is impossible but in reality is simply hard.  If you say no They’ll find someone else… and you’ll miss out on a wonderful opportunity for service and growth.

Do NOT mistake that for “life coaching” or some New Age garbage.  The Gods are not your personal trainers and your individual growth and development isn’t very high on Their priority lists.  If a God does take an interest in your growth (Cernunnos did with me) it’s almost certainly because there’s something They’re preparing you to do down the road.  The Gods have Their own agendas and it’s not our happiness and fulfillment!  We can, however, participate in those agendas, and in doing so learn and grow and do some amazingly good things.

You always have the right and the ability to say no.  But once you say yes, backing out is unwise.  A quick reading of Their stories shows They can be rather harsh with people who don’t keep their word… and They may go to great extremes to insure you keep it.  Do not make promises lightly or vaguely.

Being called by a God is an awesome thing – and an awesome responsibility.  If you haven’t heard that call, perhaps you need to learn how to listen for Them.  Or perhaps the Gods simply haven’t noticed you yet – remember They are not all-knowing or all-seeing or all-anything else.  Pursue Them with passion!

Because honoring the Gods is always a good thing. 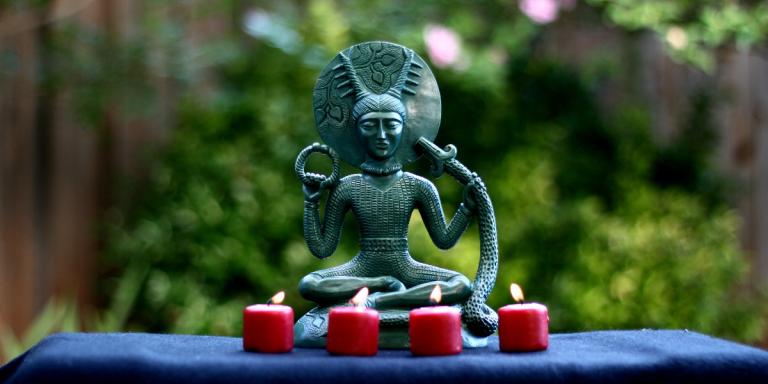 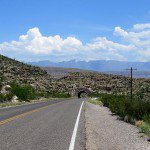 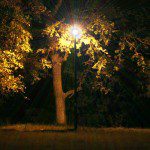