Newgrange is the largest, most famous, and most spectacular of the passage tombs in the Bru na Boinne area, but it is far from the only one. There are about 40 tombs we know of, some of which have never been excavated – and there may be others that still lie undetected. The largest of these are Knowth and Dowth.

When we visited Newgrange in 2014 we were unable to see Knowth and Dowth. While Newgrange is open year-round (except for four days around Christmas), Knowth is only open part of the year – this year that’s March 25 through November 2. Access to Dowth is not controlled, but it wasn’t part of the bus tour we took. This time we went after Knowth was open and we arranged for a taxi driver to take us to Dowth.

Others have written about the history and archaeology of these sites. Rather than summarize what you can find with a bit of googling, I want to talk about my experiences at these two fabulous places.

Like Newgrange, Knowth can be accessed only through the Bru na Boinne Visitor Centre. Tickets are timed and are sold on a first-come, first-served basis. Shuttle buses carry visitors to the site. But whereas our Newgrange tour had perhaps 50 people in it, our Knowth tour had 12. A guide showed us around, explained what’s known about the site, and took us inside the main tomb.

The interior of Knowth – as presented – is far less impressive than the interior of Newgrange. The entrance is shorter, artificial lighting is stronger, and the area where visitors gather has a modern floor and walls. Part of the passage is lighted, but access is not possible – the picture to the right was shot through a gate.

It’s the exterior of Knowth that’s so impressive. There are several smaller tombs (I counted 15) surrounding the main tomb. None can be entered, but some have open grates that let visitors look inside. There are stairs that allow access to the top of the main tomb, giving a great view of the site and the rest of the Boyne Valley.

The same white quartz stones that cover part of the exterior of Newgrange were found at Knowth. Nobody knows what they were used for. What we see at Newgrange is Professor Michael O’Kelly’s interpretation – an arrangement that requires modern cement to hold it in place. At Knowth, Professor George Eogan suggested that perhaps they formed a walkway. The western entrance to Knowth shows what that might look like. While I like what O’Kelly did at Newgrange (it reminds visitors that this is a temple as much as it’s a tomb), I like seeing the alternative presented at Knowth. Visitors can look at both and make up their own minds. 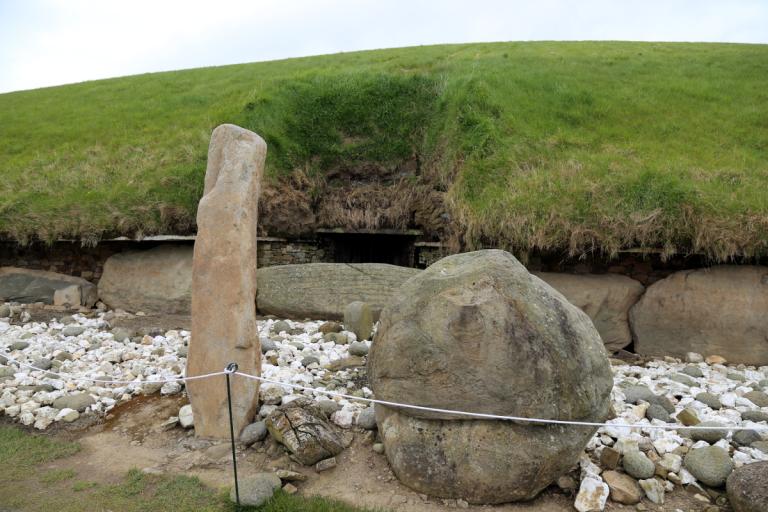 The most impressive parts of Knowth are the carved kerbstones. As with the ones surrounding Newgrange, we really don’t know how to interpret them. Are they maps? Are they visions – perhaps aided by entheogens? Are they a guide to the Otherworld? Are they simply abstract art? Take a look and decide for yourself. 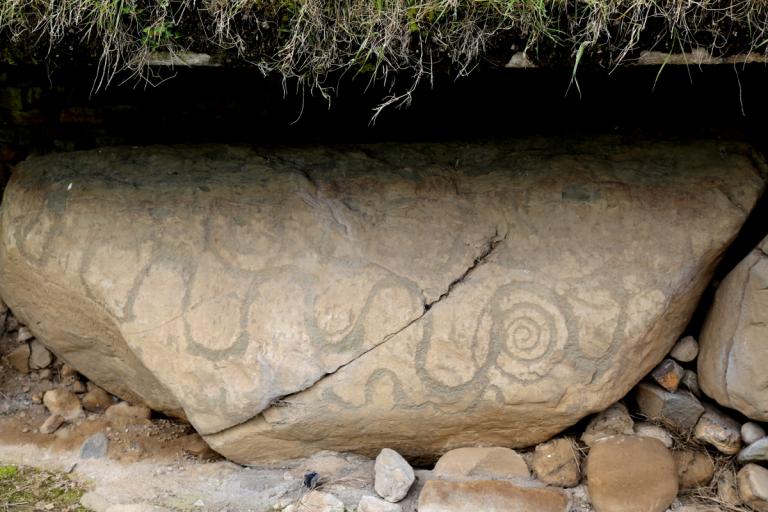 Just outside the eastern entrance is a “woodhenge” – a circle of timbers has been placed where post holes were found. Was there a roof? We don’t know. Was this a ritual area? It seems highly likely.

Perhaps more than any other ancient site I’ve visited, Knowth begs to be used. It wants processions winding among the tombs. It wants the equinoxes (to which it is aligned, we think) celebrated. It wants offerings poured. It wants to receive the bodies of the dead once again. It seemed pleased with our prayers for the ancestors and offerings of the water we were carrying, but it wanted more.

We had a little under an hour at Knowth – I could have spent another hour just wandering the grounds and letting the power of the place flow over me and through me. If you make it to Bru na Boinne, don’t get so caught up with Newgrange that you skip the smaller, different, but still very powerful experience of Knowth.

Dowth is an often-overlooked site. It’s not on the tours out of the Visitor Centre – our driver had to look it up because he had never been there. You can’t get inside the tomb. Whoever owns the land is using it to graze sheep – watch your step!

But if you can get there, all you have to do is go through the gate and you’re there – no tickets, no waiting, no crowds. There was one other person at Dowth when we visited – she took a group photo for us.

Dowth gives visitors an idea of what the Bru na Boinne area was like in the centuries between the time the tombs were abandoned and their exploration in the early modern area. We recognize the kerbstones because we’ve seen them at Newgrange and Knowth, but without that frame of reference we might assume they’re ordinary rocks… at least until we saw the carvings. The mound is clearly of human construction, but the heather and especially the tree growing on the south slope remind us that Nature is bigger and more persistent than we are.

At first glance, it appears that Dowth is dormant and sleeping. But open your eyes – your other eyes – just a bit and you can see it’s very much alive and active. People built Dowth, but they built it on this site for a reason – it was and still is a place of natural power. I poured offerings to the place and the spirits of the place – the offering was acknowledged.

If Knowth is begging to be used, Dowth is just fine being home to sheep and hosting the occasional visitors who go to the trouble to get there. Like so much in the Otherworld (and in the liminal places that connect the Otherworld to this world) it prefers to do its own thing for its own reasons and avoid dealing with human foolishness.

Knowth and Dowth are beautiful and powerful places that connect us to our ancestors and to the Otherworld. They also remind us that while visiting the popular tourist sites is a great thing, there’s value in visiting the smaller and more remote sites as well. 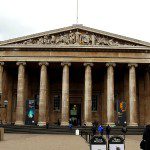 May 3, 2016
Not Everything Belongs in a Museum
Next Post 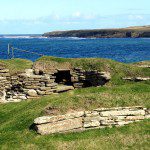 May 8, 2016 Many Ways to Be a Celt
Recent Comments
0 | Leave a Comment
Browse Our Archives
Related posts from John Beckett