Why I Gave Thanks to a Turtle

Last Sunday morning I went for a walk in one of the local parks. Unlike most of my park walks, this time I left my camera at home. I had taken quite a few good pictures the day before, but mainly I had a blog post that was stalled and I wanted to try to think through it on the walk, rather than concentrating on finding the next photo.

I still took 40 pictures with my phone.

In fairness, almost half of them were taken because I happened upon a turtle sunning themselves at the edge of the concrete path. I have a few turtle pictures, but most of them are of turtles in or near the water and they were taken from a distance. This was a chance to get some good closeups.

Just not too close up. I wanted to fill the frame, but I didn’t want to scare the turtle back into their shell.

I didn’t want to scare the turtle, period. 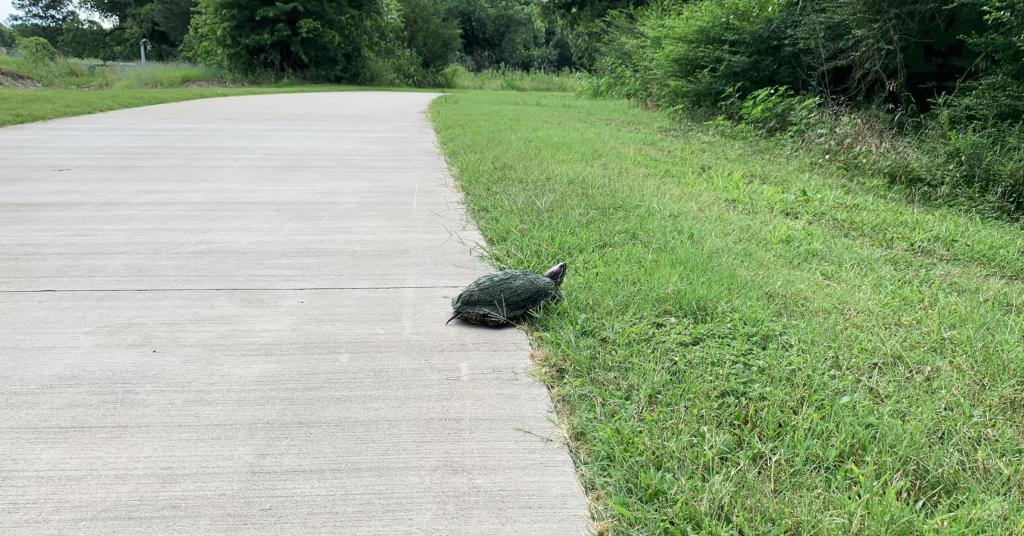 Mission accomplished. I got some good pictures and the turtle was undisturbed. On my way back about 10 minutes later, the turtle had moved off the path and into the grass. I was able to get some different shots.

I had to get down on the ground to get some of these angles. As I was getting up, I said “Thanks! Bye, Turtle.”

At that moment, a bicyclist approached from behind me. He said something I couldn’t quite make out: there was a lot of background noise, he didn’t speak very loudly, and he was going relatively fast.

What I “heard” was “do you really think that turtle can understand you?”

Now, most likely what he said was “good morning” in an attempt to be polite or “behind you” to make sure I didn’t back into his path. I had already seen him – I’ve learned that when I’m taking pictures, if I move my feet I lower the camera, check where I’m going, reset my feet, and only then lift the camera again. There have been no tragic accidents, but I’ve come uncomfortably close to edges of several cliffs.

I honestly don’t know what the bicyclist said – I just know he said something.

So the conversation that follows took place only in my head. The bicyclist didn’t stop or even slow down. For all I know he didn’t even see the turtle – I may have blocked his view. But if he had seen and heard the whole encounter, he very well might have said it, or at least thought it. I’ve heard similar thoughts from other people many times.

In my head I heard this not as a question but as an expression of ridicule. But taken at face value it’s a fair question.

It’s just not the most important question.

We talk to our cats and dogs all the time, and they understand us. Dogs can learn over 150 words and respond to commands. Cats can understand some words too, but they rarely respond to them – they’re cats, they domesticated themselves, and they do what they want.

But cats and dogs are mammals. Turtles are reptiles, with simpler and less evolved brains. This article says “experts aren’t exactly sure if reptiles have the ability to bond with humans or not.” It’s virtually certain they can’t recognize words, and they may not be able to discern voice tones the way mammals do.

So, do I think the turtle understood that I was expressing gratitude for helping me get the nice pictures? No, not at all.

But that’s only part of the matter. 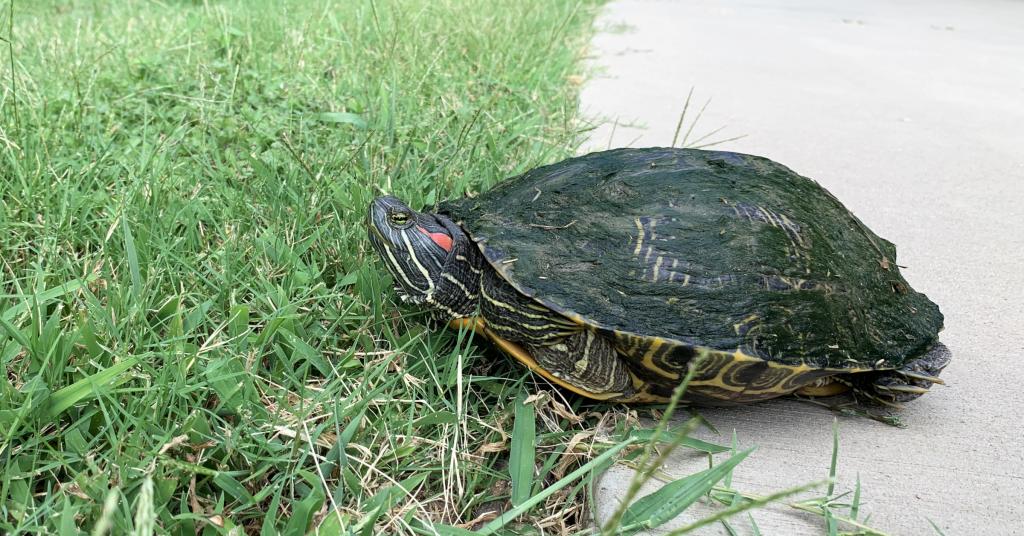 I’m a Druid who talks to trees – talking to turtles is no big deal.

Unlike humans and cats and turtles, trees don’t have ears. Or brains. It’s conceivable (though far from certain) that they can perceive sound vibrations, but humans verbally communicating with plants simply isn’t possible.

But we still talk to trees.

Yes, we can. But we must be careful not to assume such conversation is simple and easy. Otherwise it becomes like my conversation with the bicyclist: presumptive and rather one-sided.

Sometimes the conversation really is verbal. Sometimes it’s thoughts in your head, and only some of them are yours. More often, though, it’s images and impressions and feelings – the kind of non-verbal communication our pre-human ancestors must have used.

So, yes, I could have “spoken” with the turtle spirit to spirit. But this was far more casual than that. This was me saying “thank you” to a turtle, verbally, in English.

Do I really think the turtle understood me?

That really isn’t what this is all about.

Relating to other-than-human persons as persons

The core principle of animism is that everything is not a thing but a person. And we can relate to other persons as persons, whether they’re human persons, tree persons, or turtle persons.

But not only do we have to remember that turtles aren’t humans, we also have to remember that humans aren’t turtles. We can’t relate to a turtle as a turtle – we can only relate to a turtle as a human. A cat brings us dead mice because that’s what cats do. And while our greater intelligence means we can know a thing or two about cats and trees and turtles, ultimately we are humans and we can only do what humans do.

When I say “thanks!” to a turtle I’m acknowledging them as a person. And I’m doing what my values and ethics say I should do by expressing gratitude to a person who has helped me. 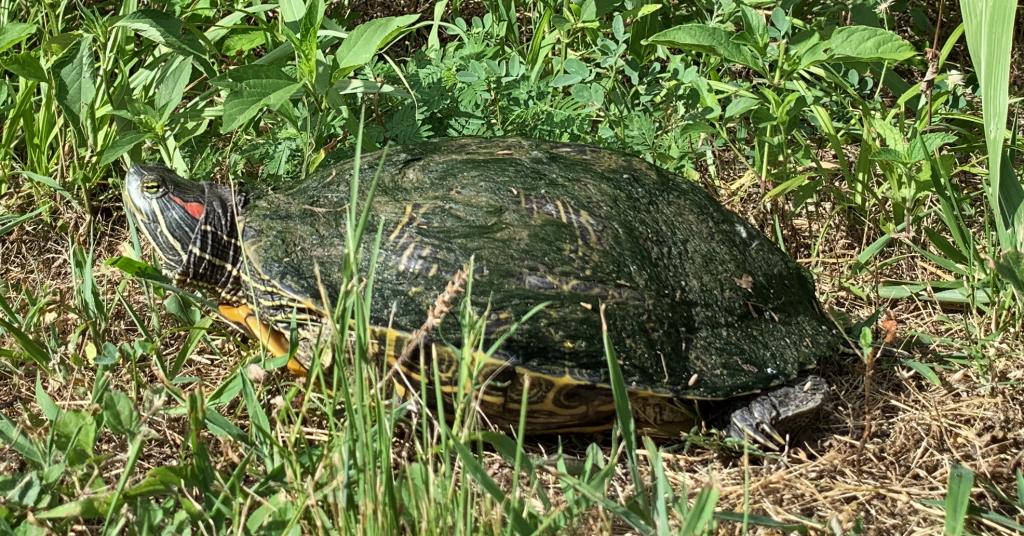 I like to think that at some level, the turtle recognized that a human found them interesting, interacted with them from a safe distance, and then left them alone to enjoy their day. I like to think that, but I really have no idea if it’s true.

Why do we give thanks to turtles, and trees, and all the other-than-human persons with whom we share this world?

Because it’s the right thing to do. 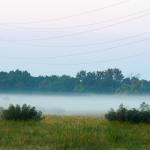 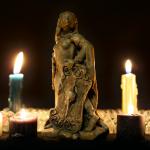 July 6, 2021 The Morrigan Didn’t Call You Up Just To Smack You Down
Recent Comments
0 | Leave a Comment
"I kinda dig the Celtic stuff more, wish more of it would have survived. The ..."
I wish my name was Fred Elves, Witches & Gods
"I liked very much your post, John, it was deeply meaninful. But its last sentence ..."
Reme Latorre Miracles, Myths, and Magic
"That's just it: our cultural and physical surroundings have become so different that even the ..."
Ingeborg Nordén Is it Lughnasadh without Lugh?
"Following up to my last observation: the only recorded festival in Scandinavia at this time ..."
Ingeborg Nordén Is it Lughnasadh without Lugh?
Browse Our Archives
get the latest from
John Beckett
Sign up for our newsletter
POPULAR AT PATHEOS Pagan
1