“Hop”: So Racist It Hurts 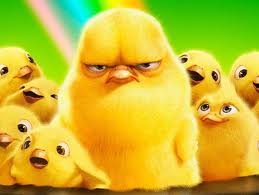 All movies have a primary message: Good is Rewarded; Be True to Yourself; Follow Your Heart; Horses Are Just Like People; Visit Disneyland … whatever. But every movie has its message, and that message is rarely difficult to discern. And it’s never difficult to discern the message of a children’t movie.

The primary message of the deplorable movie Hop is extremely clear: If you are Hispanic then you are laughably sub-par in every way.

The star of Hop is a rambunctious young drummer bunny named E.B.—short for Easter Bunny (voiced by the delightful Russell Brand). E.B.’s elderly father, Mr. Bunny, is the Easter Bunny. (If my father had followed this progeny-naming logic, my name would be Food Salesman—but never mind.) Mr. Bunny Sr. oversees a vast candy factory that, judging from the mountains of Kisses it produces, is heavily subsidized if not outright owned by the Hershey Company. On Easter every year Mr. Bunny delivers Kisses and colored eggs to children all over the world. (Although, he pointedly notes, “We haven’t cracked China yet.” Because, you know: nothing says “children’s movie” like a statement about economic and cultural imperialism.)

Easter Bunny Sr. has a second-in-command at the factory, Carlos. Judging by Hank Azaria’s (undeniably brilliant) voicing of him, Carlos is Mexican. Carlos is in charge of the vast ranks of line workers in the wondrous Hershey candy factory. They, like Carlos, are yellow chicks. Carlos, however, is a good deal less cute than the chicks he supervises. He is twice as tall as they, for one. And while all the other chicks in the movie are fluffy balls of adorableness, Carlos is simply out-of-shape fat. But the main difference between Carlos and his chick-crew is that while they are childlike simpletons, Carlos is a two-faced, conniving, bitter liar who doesn’t know his place.

When E.B. goes missing (he runs away to Hollywood in his quest to become a famous rock drummer, see), Carlos, back at the plant, decides to come forth with his passionate desire to be—or to at least perform the functions of—the Easter Bunny. Donning little bunny ears to help Mr. Bunny envision him in that role, he makes a terrific case for why should be the proxy Easter Bunny: he’s been Mr. Bunny’s right-hand man for years; and he knows the business inside-out (as opposed to E.B., who has never shown any interest in the job he was born to inherit). In short, Carlos is clearly prepared for the promotion. And Mr. Bunny does, after all, need someone to this year deliver the candy. He’s grown too old to do it himself; this is the year that E.B. was supposed to take over. But E.B. has disappeared.

“Why not me?” says Carlos enthusiastically. “I can do it! I’m ready!” And we know that he is.

The idea of Carlos filling in as the Easter Bunny, though, strikes the father as so outlandish that he laughs in the face of the now humiliated Carlos. As, still chuckling, Mr. Bunny walks away, a foreboding shadow falls across Carlos’ face. Now, for the first time in the movie, evil Carlos emerges.

“Yeah, see you later,” he murmurs angrily. “Enjoy your life of privilege.”

And suddenly this children’s movie is about nothing so much as racism and class warfare.

Carlos never gets to be the Easter Bunny. And we’re never given any reason whatsoever for why he’s judged unqualified for that job—which definitely needs filling, and for which he’s definitely the only qualified candidate. We do learn that the problem is not that he’s not a rabbit: when the good-looking young white man in the movie decides, out of nowhere, that he wants to be the Easter Bunny, Mr. Bunny—knowing full well that they guy knows absolutely nothing about the detailed, very complex job—happily bestows upon him the title and function of “co-Easter Bunny.”

Dedicated, hard-working, fully knowledgeable, vastly experienced Latino? Not a chance. Funny to even think about.

White guy out of nowhere, who knows absolutely nothing about the business? Get that corner office ready!

And there, boys and girls, is the very clear message of Hop: if you’re born either privileged or a white male, you can, with little or no effort, go straight to the top. If, however, you are Mexican, then you can do the work, and you can supervise lots of others of your type who really do the work—but that’s where it stops for you. You’ll never be able to advance beyond that. You might be able to make it to second place. But first place will always be denied you—and you’ll never really be told exactly why.

When my wife and I saw Hop, a Mexican couple and their little girl were sitting directly behind us. Before the movie started the three of them were happily chatting, excited, eager to see the show.

When the movie ended, and the lights came up, not one of them uttered a single word as they gathered their stuff to leave. Heads down, they slowly filed out of their seats, like they were leaving a funeral.

April 8, 2011 The Smith Family Chronicles 7: "Have You Forgotten Our Love?"
Recent Comments
204 Comments | Leave a Comment
"Wow. Chris's response is 8 years old. Any update?"
Anthony Hendriks Pastor calls his Christian teenage son ..."
"So... you don't believe in the Holy Spirit, then? According to Jesus, it is the ..."
KraigDeKompressorKruncha Is hell real? What are we, ..."
"Thank you thank you thank you for this! This is exactly my story... Our story. ..."
ashley williams 1 Man, 2 Women In A ..."
"Hello dear Brother in Christ. You are experiencing Child Abuse and if it were possible, ..."
Marion Duncan Pastor calls his Christian teenage son ..."
Browse Our Archives
Related posts from John Shore