To Any Young Woman Struggling Against Low Self-Esteem

To Any Young Woman Struggling Against Low Self-Esteem May 29, 2011 John Shore 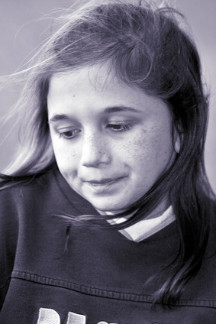 There are two kinds of low self-esteem. One is the fairly constant, low-level sort that throughout any given day makes you feel awkward, embarrassed, or acutely dorky about all kinds of things you’ve said, done, thought, and been.

The other is the darker, uglier, more pervasive, cutting-yourself kind.

The first and easily most important thing to realize about low self-esteem is that every single person on the planet, no matter how happy, healthy, and successful they might seem to be, falls somewhere on the low-self esteem continuum between Dork and Dark. Where any given person at any given moment happens to fall on that continuum depends upon what’s just then going on in that person’s life. But nobody escapes low self-esteem. Some people have learned better than others how to pretend like they don’t suffer from low self-esteem, but if you trust anything in this world, trust that they do. They have to. Constantly battling low self-esteem is like having bones and body hair: it’s just part of being human. Everybody drops their drawers and then sits awhile in a cloud of their own stench; everybody roots around in their nose for boogers; everybody spends an inordinate of amount of time playing with their own genitals; everybody is a crazed ego-maniac; everybody is hounded by the fear that anyone will ever find out what they themselves are deeply convinced of, which is that they’re nowhere near good enough.

If you’re human, then, as much as you’re anything else, you’re a crapping, nose-picking, self-obsessed masturbator prone to low self-esteem.

Them’s the rules. They change for no one.

And do not let the media persuade you otherwise, try though it does every single moment of your life. Understand that 95% of the media you experience is designed and presented to you with one purpose in mind: to make you feel like if you had what The Stars have — their charisma, their talent, their charm, their looks, their inspiring effervescence, their haircare products — then you’d be more like them, and so infinitely more pleased to be you than you are. (Literally) selling you on that single point is what media does; that’s what media is. Delivering that message to you is the entire reason the vast universe of media exists at all. Because that’s the only message that will get you reaching into your purse for the only thing media really cares about at all.

If you weren’t constantly being shown who you could be, you might be content with who you are. And then what would you buy?

Pffft. A content consumer is no consumer at all.

So media makes sure that never for more than three moments running do you forget how beautiful and smart and wonderful you could be, if only you’d [insert here product or service you’re supposed to buy right this minute].

And it’s all pure [curse word]. No celebrity in the world is any happier, fulfilled, or emotionally balanced than are you, your mom, your dad, or anyone else you could point to. The Stars just seem awesomely together and fantastic, because: A. they’re (usually) extremely good-looking — which of course has zero to do with the quality of their character, and everything to do with a completely random roll of the genetic dice — and people (designed, as we are, to worship and adore) are forever confusing beauty with virtue; B. they’re surrounded by trainers and handlers and coaches and PR people and make-up and wardrobe and hair and graphics people whose whole job it is to make sure they come across as unaffected, charming, and wise; and C. when the spotlight is on you as you’re being widely adored for how talented and wonderful you are, the natural thing to do is feel and act humble, gracious, kind, centered, fabulous, and cosmically attuned.

You know how you are if in front of people you’re accepting some kind of trophy or ribbon, or whatever, for something you’ve done. You get all … sweet and humble and kind of shy and … winning, basically. Same with celebs. You see a movie star chatting on one of the umpteen zillion TV shows whose whole purpose is to feed the media machine of which they’re part, and you think, Wow, that celebrity is really humble, gracious, kind, centered, fabulous, and cosmically attuned. And for that little bit of time you see them on TV, they are those things. But that’s because they’re on TV. Once those set lights are turned off, and those celebrities are back in their normal life, the same way turning off your TV puts you back in your normal life? The you can bet every penny you’ll ever make that before long they’ll be farting gas that could drop bark off a tree, throwing temper tantrums that would embarrass a psychotic two-year-old, and spending endless hours online, obsessively reading what anyone anywhere is saying about them.

Because they’re people. So they can’t help it. They must.

And celebrities are especially that way. I mean … everybody has horrible gas, but the truth is that no one is more likely to be more psychologically kadoinked than is a celebrity. Because a celebrity’s entire paradigm for being a normal human is completely thrashed. All people want everyone to love and admire them; again, that just comes with being human (what with our being first and foremost social creatures, doncha know). But if you’re ever been in a position where it almost seems possible that everyone actually does love and admire you (because of something you’ve done that makes people feel good about themselves, which is the sole reason anyone in showbiz ever really becomes famous)?

Then, man-o-man, did you ever get pushed out of a helicopter right over Crazyville — where the population then consists solely of dazed you, and the cadre of people around you whose living is directly tied to you being famous.

And that is one awful place to be.

Always pity the celebrity; he or she resides in a special, uniquely shiny hell.

Pfft. Now I’m feeling like a loser because this post has grown way too long, and I haven’t even started to say about self-esteem what I want to.

My dad and teachers were right. I do talk too much.

Now I’m going to have to go overeat.

Ahhhh … the cycle of life.

Anyway, next time I’ll continue on the theme of self-esteem. [And so I did: please see Young Woman: This, Finally, Is Your World.] Please join me if that’s something that interests you.

P.S. I suppose this goes without saying, but in case: All of the above also applies to young men. Or to anyone, for that matter. We’re all stuck together on the Low Self-Esteem Express.

P.S.S. I might never again blog about anything but self-esteem.

P.S.S.S: That said, I’m not quite finished with my reflections on the Biblical notions of hell, which I’ll return to in mega-short order.

P.S.S.S.S.: The reason I interrupted my series on hell is because Kim Stephens, who writes the blog Teen Parent Cafe, wrote me to say, “Hey John! Would you accept requests for blog posts? I think your writing shows an exceptional capacity for empathy, particularly where women are concerned. What do you think about a series of articles on women and self-esteem? I think you’d find that would resonate with a lot of your readers. (My daughter still has some empowering passages from Seven Reasons Women Stay in Abusive Relationships, and How To Defeat Each One of Them tacked to her wall.)” So I wanted to get this right out, because .. I dunno. In case.

P.S.S.S.S.S. While the effects that our media has on the self-esteem of so many of our young people is caustic and deeply problematic, it’s not the sort of thing that tends to lead to the kinds of ongoing, severe depression referenced by commenter Melanie below. That much darker side of the low self-esteem continuum is one I’ll certainly address in an upcoming post. That’s a whole other can of problem.

May 31, 2011 Young woman: This, finally, is your world
Recent Comments
21 Comments | Leave a Comment
Browse Our Archives
get the latest from
John Shore
Sign up for our newsletter
POPULAR AT PATHEOS Progressive Christian
1