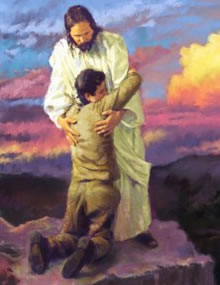 A few days ago I got in this letter:

I recently found your website via a friend’s post on Facebook. I’m sure you hear that a million times a day. March 19th, my cousin died, likely from an overdose of prescription pain medications. I believe it was deliberate, considering he’d tried before—but we’ll never know the truth of that.

He was 39 years old. He was gay, although he could not admit that to me. Not even the time before, when he overdosed, and I drove two hours to spend the night with his mother in ICU wondering if he would live. After that I knew that subtle hints would not do it. This time I tried just asking him if he was gay. He denied it. He denied it to both me and his mother, even though we told him we loved him and it didn’t matter to us.

But it mattered to him.

Six months later, he was gone.

We were raised in a very conservative family and church. He played piano at the church for years—the church he attended since childhood. The church across the street from his house. I believe he was never able to reconcile his being a Christian with the fact that he was gay. He was truly the most unhappy person I’ve ever known. It is just tragic. And now I’m left here wondering. Angry with the church. Angry with him. Angry with myself. Even angry sometimes at God. I just feel so unbelievably sad that my cousin never got to the point where he could accept who he was.

So finding your site has been bittersweet for me. I am so happy to see a Christian whose beliefs match mine in nearly every way. Yet so sad that my cousin never received Christian acceptance. And in some ways jealous of all those gay Christians I’ve read about here who have found a way to live a Christian life, and be happy, the way my cousin never did.

I don’t know why I’m writing to you except I appreciate your work here. I wish I could find a church where I could feel comfortable. These days I cannot abide knowing that the teachings from ultra-conservative churches could be contributing to the deaths of many other young unhappy gay men like my cousin. I suppose your site has given me hope that there are others in the world like me who believe in more “liberal” ideas. That’s been very hard to find, especially since I live in Texas.

I thank you for helping all the young men and women who are unhappy like my cousin was. I know you are making a difference.

Dear person who wrote me this:

I’m terribly sorry to hear of your unthinkable loss. Awful.

One thing I wanted to say is that your dear cousin was a Christian. That’s a beautiful thing. It’s real; it matters. He is now with his Father; the Son is now shining fully upon him. In this life, your cousin was broken; now, finally, he is healed. Something went wrong for him down here: the pieces didn’t fit right; for him the song of life kept breaking up, falling out of tune, disappearing.

Now he hears music all day and night, and sings himself. And he looks down upon you, and hopes that you hear something of his song.

Jesus knew from suffering. It’s a thing about Jesus not often enough appreciated or noted, how clearly and deeply sad he was. Not for nothing is he remembered to us as the man of sorrows. We’ve come to believe that what God and Jesus want are happy, healthy, positive, prosperous, peppy people. And such people are great, of course. But that’s not the blind man at the pool. That’s not the bedraggled lady who can’t stop bleeding. That’s not the leper shunned by the world. That’s where Jesus is. That’s the spirit to which Jesus was most compellingly drawn. Those are the people who instantly tear open Jesus’ heart, who make him bleed.

Jesus’ time on earth was always moving toward the cataclysmic event when his life would be unnaturally aborted, when his own clarion song would end.

I’m sure that Jesus hugs everyone who dies expecting that hug on the other side.

But I know that, when poor and broken spirits like your cousin come before him, he wraps his arms around them, hard, and never lets go.

October 28, 2011 The Mild Goose Festival?
Recent Comments
101 Comments | Leave a Comment
Browse Our Archives
get the latest from
John Shore
Sign up for our newsletter
POPULAR AT PATHEOS Progressive Christian
1

A Straight Christian Mom's Response to...
FreedHearts
Books by This Author Books by John Shore