Must I forgive the brother who sexually abused me for seven years? 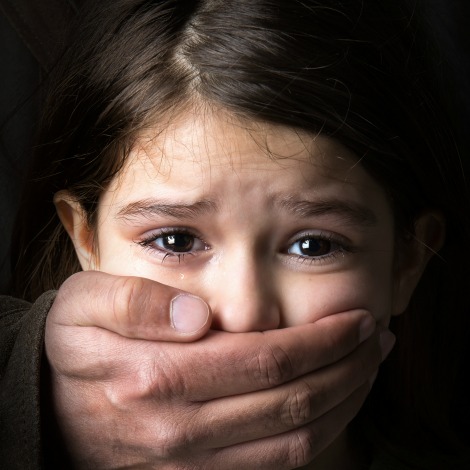 My name is L., and I’m a survivor of childhood abuse. My brother, seven years my senior, started molesting me when I was very young. My first memory of it is when I was about five years old. I believe it went on until I was about twelve. I know he raped me multiple times.

I did not grow up going to church. But I believe that I know God, and have for a very long time. God is a vital part of me, and I believe that without him I would be dead, or just freaking crazy.

I have been diagnosed as dissociative (no surprise, given my past), and have had a counselor tell me that my “God” was created by my childhood psyche to help me cope with the abuse. There may be some reality to this, as I remember God being with me, talking to me, and playing with me as a little child, distracting me from what was going on. The memories are very bitter sweet, as I’m sure you can imagine. Instead of remembering being molested, I actually remember playing games with my “God,” singing with him, etc. And I even remember Him telling me when to leave my body because my brother was coming. Regardless if this is all in my mind, I believe that God taught me how to dissociate so that I would survive.

I recently confronted my brother about what he did to me. Afterwards I cut him off from my life, refusing to deal with him. I wanted to have the last word. Now, though, he wants to “sit down and work things out” with me. He is begging my family to talk me into sitting down with him. My family (who for years has known about what he did to me—and who allowed the abuse to occur) insists that now I’ve not only opened a can of worms, but that I “owe it” to my brother to meet and talk with him. They say I owe my brother because I am a Christian, and so must forgive him.

Honestly, I often have quite vivid, very non-Christian like thoughts of my brother dying. I know that in reality I don’t want him to die. On some level I actually do love my brother. But I feel better when I sometimes allow myself to think these things when I’m hurting. And I don’t feel guilty sometimes for the hate that I feel towards him. It has been at least twenty-five years since the last time he sexually touched me. A lot of time has passed, but this is still very fresh in my mind and the anger burns sometimes like a fire in me.

Do I really need to forgive him? I can hardly believe that God would send me to hell for angry thoughts I have about my brother. Just wondering your opinion.

Who are these cretins? Who would say such a thing?

Oh, that’s right: people trying to shift responsibility for their evil onto the victims of their evil.

They want you to suffer now with the same silence you suffered then. Because that is what’s best for them.

And don’t you want what’s best for your family?

Don’t you love your family?

Go away, little girl, they say.

Go to your room.

Shut the door. Shut your mouth.

And keep your mouth shut until you die.

Your family—or at least those within it who tried to blame you for responding to what happened to you—are animals. Here’s hoping they don’t remain that way until the end.

You do not need to forgive your brother. “Forgive and forget” sounds spiritually enlightened, but the fact is that it’s simply not possible for any person to forget an egregious violation against them. Your brother did do to you what he did. You literally cannot forget that. And you’re under no moral obligation whatsoever to make him feel better about what he did. His conscience is his responsibility, not yours.

The Greek word most often translated in the Bible as “forgive” is aphiemi. It means to depart, separate from, bid goodbye. The word is derived from apo, a prefix implying separation, and hiemi, meaning to put in motion, send. It means send away.

And that is something you want to do. You do want to send away the pain your brother caused you. You want to separate from it, bid it goodbye. You want it away from you.

But that’s about you, not about your brother or your family. You.

So the question is, how do you “send away” the pain and anger that you feel for your brother?

Well, the first thing is to simply acknowledge the validity of those emotions. What happened to you should cause you anger and hurt. It should engender feelings of revenge and retribution. Those feelings have an organic integrity. From your brother’s violation of you is naturally born within you the same righteous anger that you would feel toward anyone who has victimized any innocent person. You wouldn’t be human if you didn’t feel that anger. That you do feel it means that your conscience has remained intact. It means that you’re still with us.

So the first thing is to just accept as okay and healthy whatever anger or ill-will you harbor for your brother. Be okay with feeling as you do toward him. Let it be. You’d be crazy if you didn’t feel the way you do.

Once allowed to just be what it is, you’ll find that your anger begins to abate a little. And that will open up for you the peace necessary for getting down to the question that is central to your “sending away” all of your anger and ill-will toward your brother: the question you must answer if you are to ever, in the realest sense, “forgive” him.

And that is the question of why what happened to you did.

Why did your brother hurt you so? It’s in finding the answer to that question that your salvation—which is to say your enduring peace of mind—lies.

Well, there can be only two causes for your brother’s evil actions: nature or nurture. The boy was either born evil, or he learned evil.

He’s either innately, profoundly, organically dysfunctional—he was simply born with some really messed-up wiring in his brain—or somewhere along the line he was treated so terribly that then his wiring went bad. Then he became just like a pit bull whose owner has beaten it into becoming an attack dog.

I’m voting that what’s almost always true in these matters is also true in this case: that when he was young, your brother was also sexually abused. It’s almost a certainty that he did to you what was first done to him.

It’s the most common thing in the world. Kids process by acting out. They have no other way of processing. They simply get imprinted upon—and then act accordingly.

That your brother was abused as he abused you would explain (as nothing else could) your parents’ abysmal response to you wanting to discuss that abuse. To them, your pointing to your brother feels like you pointing through your brother straight at them.

Which isn’t going to work for them, of course. Which is why they reverted back to trying to make you feel guilty for the guilt that remains theirs.

Ultimately you can forgive your brother, because ultimately he’s not morally culpable for what he did.

He wasn’t then, that is. But today he is. As an adult, your brother needs to take so seriously his past offenses against you that today he finds himself compelled to go through whatever he must in order to reconcile himself to himself, and to you.

If he’s serious about doing that, then his tone, and the things he says, will show you beyond a doubt that he is.

But if you get from him anything less than that, stay away. If your brother does not make completely clear to you that he is in that contrite, repentant, truly healing space, do not let him in any way near you. He must first—and for as long, and in as many ways as it takes—show you that he’s willing to be anything but defensive: that he is as broken as you are by what he was led to do to you.

When he comes to you, and begs for forgiveness, and is clearly open to really talking about what really happened—and when above all he makes clear to you that he understands that the real transgressors in your lives were and are your father and mother—then you can talk to him.

But if all he’s doing is asking your parents if they’ll get you to talk to him?

That’s not conviction of sin. That’s damage repair. That’s just him taking care of him. Which, again, is as typical as typical gets.

Open up a Gmail account you can shut down whenever you want; tell your parents and your brother that they are fee to contact you by emailing you there and in no other way; ignore from them any emails that aren’t positively ringing with the unmistakable tone of true contrition.

February 26, 2012
Temptation: A sermon by Pastor Bob
Next Post

February 28, 2012 The Child We Left Behind
Recent Comments
230 Comments | Leave a Comment
Browse Our Archives
Related posts from John Shore