God and the Abolitionists 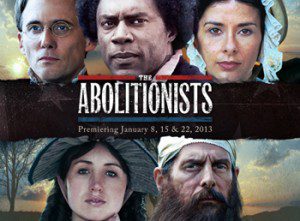 My son got to stay up late last night to watch the premiere of PBS’s new docu-drama The Abolitionists.

This three hour film attempts to tell the incredible story of America’s first civil rights movement, when a strange coalition of ordinary people banded together across lines of class, race, gender and politics to work for the end of a terrible injustice at the heart of our nation’s economy.

The telling will be criticized, no doubt, for what it omits. Black women, for example, played such a central role in this struggle, but neither Harriet Tubman nor Sojourner Truth are central characters in the film. As a North Carolinian, I noted the absence of Quakers, who started the Underground Railroad on their farms here in Guilford County in the early 19th century.

There are always more stories to tell, and I hope this telling will encourage all of us to learn more about people who devoted their whole lives to becoming citizens of a country that did not yet exist.

But I want to say that The Abolitionists gets this right: the crazy idea that America could exist without slavery was intimately tied to a personal relationship with God.

In each of the five interwoven lives that this docu-drama chose to profile, faith is not ignored or downplayed, but rather highlighted. About the publisher of The Liberator and founder of the American Anti-Slavery Society, historian James Brewer Stewart says in the first episode:

William Lloyd Garrison’s religious background was not just a background, it was at the core of who he was. It was an indwelling spirit inside of him that constantly thought about making God’s will come into being on this earth.

To a person, this telling of the story highlights the role that faith played in a decades long freedom struggle that reshaped America.

As I think about the Everyday Awakening that I see happening today, I think about the parallels to the abolitionists–how we cannot imagine what it would mean to consider undocumented people as fellow citizens; how mass-incarceration isn’t even on the table as a policy issue in our elections; how conversations about national debt almost never include the predatory lending practices that are exploiting low-income communities in our country; how almost none of us can conceive of an America that doesn’t depend on oil.

Almost to a person, the people I know who are challenging these injustices–the people who are carving out spaces for some alternative with their very lives–are inspired and sustained by faith.

I’m grateful for an hour of national television that helps me show my son that this is how it’s always been.

January 23, 2013 Fundraising as Altar Call: Reshape Your Life
Recent Comments
0 | Leave a Comment
"Official behavior often reminds me of what is supposed to be a wisecrack. “The beatings ..."
John Gills Arrests Resume As Moral Movement Continues
"I didn't know Professor Smith got arrested; I'm still in my hounded-endlessly-until-I-grab-a-baseball-bat phase (much of ..."
Al McMullin Walle Political Science Professor on Why He ..."
"The Greensboro Police Department and rich white people ("neighborhood associations" they call themselves keeping the ..."
Al McMullin Walle Political Science Professor on Why He ..."
"I wish I still lived in Goldsboro so I could join you there. There is ..."
Paula Woodworth A Palm Sunday Invitation to Holy ..."
Browse Our Archives
Related posts from Jonathan Wilson-Hartgrove