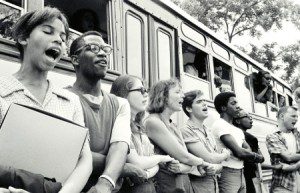 50 years ago, in the summer of 1964, the Freedom Movement in America focused its energies on Mississippi. National civil rights organizations partnered on a Freedom Summer Project, working with local leadership to set up Freedom Schools and the Mississippi Freedom Democratic Party. Many of the leaders of that Freedom Summer were baptized in the Movement through the Freedom Rides of 1961. Coming out of Mississippi’s Parchman Prison, they knew that if America was to be born again, change would have to begin in Mississippi.

50 years later, the Foreward Together Moral Movement in North Carolina has declared another Freedom Summer Project for 2014. I’m delighted that School for Conversion has the chance to kick the summer off by hosting a 21st-Century Freedom Ride into the heart of Southern Freedom Movement history.

Elders for this year’s ride include:

If you’d like to ride with us, registration for the ride is open until next Wednesday, April 30th. Learn more here.

We’re excited that, like 50 years ago, hundreds of young people are eager to participate in this Freedom Summer. But one of the things SNCC learned in Mississippi was that, if only those who can afford to pay their way come, a Movement doesn’t represent the beloved community it longs for. For $250, you can sponsor a directly affected young person to join us on this ride and learn from the great tradition of those who’ve worked for their own liberation, hand in hand across the dividing lines of our society.

April 22, 2014
An Earth Day Invitation to Watershed Discipleship
Next Post

April 28, 2014 We Can Change the Story
Recent Comments
0 | Leave a Comment
"Official behavior often reminds me of what is supposed to be a wisecrack. “The beatings ..."
John Gills Arrests Resume As Moral Movement Continues
"I didn't know Professor Smith got arrested; I'm still in my hounded-endlessly-until-I-grab-a-baseball-bat phase (much of ..."
Al McMullin Walle Political Science Professor on Why He ..."
"The Greensboro Police Department and rich white people ("neighborhood associations" they call themselves keeping the ..."
Al McMullin Walle Political Science Professor on Why He ..."
"I wish I still lived in Goldsboro so I could join you there. There is ..."
Paula Woodworth A Palm Sunday Invitation to Holy ..."
Browse Our Archives
get the latest from
Progressive Christian
Sign up for our newsletter
POPULAR AT PATHEOS Progressive Christian
1