No One Knows Enough 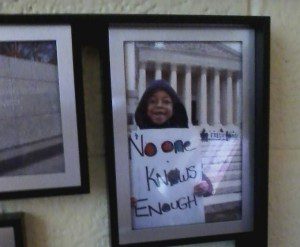 Since we opened a third home here at Rutba House(s) this summer, I’ve found myself praying morning prayer in three different places each week. The same old songs ring a bit differently in each place, inviting me to see what God is up to from a different vantage point.

I’ve been praying with my eyes open.

Last Thursday morning, sitting on the red couch at the house on Onslow Street, I was thinking about Henry Lee McCollum, who’d gone home from North Carolina’s death row the day before. Henry was the longest serving prisoner on the row. 31 years he was locked up, condemned to die for a crime he didn’t commit. Illiterate in 1983, Henry signed a confession when officers told him after hours of interrogation that it was the only way he’d ever get to go home.

But Henry was exonerated by DNA evidence from the original crime scene that implicated another man. I felt a tear rolling down my cheek. After 31 years, Henry was finally home.

On the wall across from my seat, I noticed a picture of my son from our Rutba House retreat in Washington, DC, a few years ago. As it happened, we were in town that weekend on the anniversary of the US reinstating the death penalty in 1976. At the invitation of some friends, we went together to the steps of the Supreme Court to say that we, as followers of a crucified Jesus, cannot support the death penalty. We invited all the kids to make signs the night before. In his first grade script, JaiMichael painted, “No One Knows Enough To Kill.”

Indeed. Justice Scalia, arguing for the death penalty from that same Court in 1994, cited Henry’s case as just the sort of heinous crime that demands execution. And he was right: the rape and murder for which Henry was convicted was evil. Such evil demands justice—even imperfect justice in our broken world. But, as the District Attorney in Robeson County admitted last week, our justice system got the wrong man when it picked Henry and his brother, Leon. Justice Scalia was right, but he didn’t know enough.

No one knows enough to kill.

I’ve spent several years now listening to the stories of incarcerated people in our Project TURN classes. Henry is not alone. Most people behind bars are not innocent of the crime for which they were convicted (though a recent study suggests at least 1 in 25 people on America’s death rows are). But I’ve yet to meet anyone—on or off death row—about whom I could say justice has been served in their incarceration.

The more time I spend taking folks from outside to learn inside of prison, the more I realize how much we have to unlearn.

We think we know some things. We trust that, if a court of law convicted someone, they must be guilty. Henry was convicted not once, but twice. Still, the whole case against him rested on a forced confession, signed by an illiterate man.

A couple of weeks ago, 10 young men who are taking the spiritual autobiography class I teach behind bars showed up at the prison for their required orientation. Four of them, fresh from campus on a hot summer day, were turned away at the gate because they were wearing shorts. Accomplished young men in their twenties, they thought they knew how to dress. But a corrections officer told them otherwise.

It was a good intro to class. Whatever you think you know, get ready to think again.

The beginning of the gospel, according to Mark, is Jesus’ announcement that the kingdom of God is at hand—right here, present, ready to break into our lives. “Repent!” Jesus says. Turn around. Change your mind.

Think again, because you might not know all that you think you know.

We call ourselves a School for Conversion because we want to invite people to think again. No one knows enough to kill. Knowing Henry’s story makes the truth of that crystal clear.

But might we know enough to live—to really live into the fullness of what Jesus called the “kingdom of God”?

Yes, if our whole life—our whole society—is converted. We know it’s possible because we’ve seen it. And we want it for every single person on both sides of the prisons’ walls.

How do we get there? If we’ve learned anything from the Way of Jesus, we know that our learning and unlearning must happen in communion, where people who don’t have any other good reason to be together come together and share their truth with one another because God has made it possible.

This is what we’re called to be about. This much, we know.

August 29, 2014
Vote Your Dreams, Not Your Fears: #MoralWeekofAction Concludes in Raleigh
Next Post