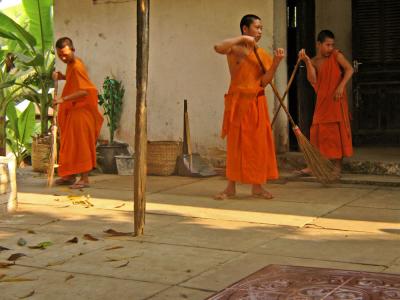 The newspaper headline caught my eye last Thursday, because it sounded like the set-up to a late-night comedy sketch: “Monks brawl with brooms in Bethlehem.”

This has to be a joke, I thought. Just one year ago, I spent a couple of days with a group of monks, on a sort of silent retreat to a monastery deep in Oregon’s wine country. My monks were all beatific smiles and soft voices and gentle movements. Almost from the moment I set foot on their property, I felt all my worries being swept away in a flood of serenity.

Monks don’t go on rampages, I thought. Curious, I read on.

The story was no joke.

The Church of the Nativity that stands today in Bethlehem was constructed in AD 565, over the cave that is believed to be the birthplace of Jesus. For over 14 centuries, the church has survived wars, invasions, earthquakes, and fires. But it is now in real danger of being destroyed in the most unlikely way – from within, by those who love it most.

In 1852, joint custody of the church buildings was granted to three very distinct Christian denominations: the Greek Orthodox, the Roman Catholics, and the Armenians. Over the decades, it’s become tradition that whichever group cleans and repairs an area gets to claim it.  And territory, in this revered place, is of utmost importance.

Last Wednesday, monks were cleaning the building to prepare for Christmas celebrations (which take place in early January, as per Orthodox tradition.) While sweeping up, some of the monks got too close to floor areas belonging to another group. Voices were raised. Brooms were brandished. And suddenly, war broke out.

In a scene straight out of a sci-fi movie, the present and the past seemed to collide. Aged men in flowing black robes, screaming and wielding broomsticks like light sabers. Special Palestinian police forces in camouflage pants and riot vests, rushing in to restrain them.

Ancient marble slabs and mosaic tiles rang with the scuffling of sandals and the thudding of boots and deep, angry shouts in a variety of languages. Halls built to inspire reverence and reflection bore witness instead to a scene as common as a barroom brawl.

The rioting has, dismayingly, become an annual occurrence. And to make matters worse, the beautiful buildings are falling apart – there are gaping holes in the stone floors, and the roofs are rotting – but no repairs can go forward. None of the monks will allow the “other” groups do any repairs, because they are too afraid of losing ownership of their own patch of ground.

The monks are good men who are simply stumbling under the weight of the oldest human struggle in the Book. Cain and Able set the stage. The monks of the 21st century perform their roles. And the Almighty, refusing to play puppeteer, watches and whispers and waits.

Historians now consider The Church of the Nativity to be one of the most threatened sacred places on Earth.

“Some wonder if the church has been spared only to be destroyed by the people who cherish it the most.” – The Smithsonian

It all seems silly and sad, doesn’t it?

People of faith being stressed out and unfocused during one of the holiest times of the year.

Believers drawing turf lines on hallowed ground, and jockeying for position among their brethren.

The pious taking the very tools they’ve been given to work out their faith, and using those tools to attack others who hold slightly different views.

Church leaders losing sight of their sacred mission, and allowing stubborn bickering to cast a bad light over the very cause they hold most dear.

But we – the sophisticated, the modern, the enlightened – we know nothing about any of that, right?

Surely we are not sometimes all just monks with brooms.

(Editor’s Note: Cathy LaGrow started writing recently, after becoming a late-in-life, full-time Mommy. Over at http://windowsandpaperwalls.wordpress.com/ she blogs about life, books, and a little more science geekery than is appropriate. Cathy is the first to brave our Friday’s Guests. If you would like to contribute to this series, drop me a note.)

Evangelical
Where have all the Nativities gone?
Karen Spears Zacharias