The Ignorant & the Innocent 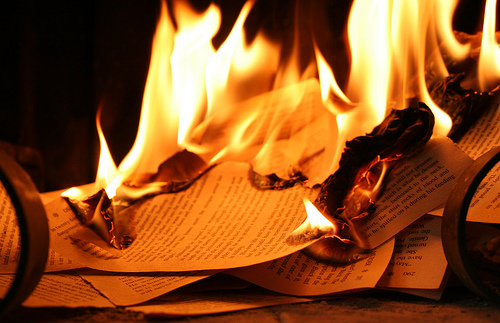 The Koran burning that has led to the vengeance killing of American troops in Afghanistan is grievous, all the more so since it was our soldiers who incited it by violating  the very principles they are supposed to be upholding.

At the heart of this war is the age-old argument between Hobbes & Locke: Should the government trust its people enough to choose a higher moral good, or will everything go to rot without an authority to protect us from ourselves?

That’s a crucial thing to understand when you are sending young men and women into a war zone. It always seems that one of the biggest mistakes we make in times of war is not understanding the historical and cultural influences of the people we are fighting for. That was certainly the case in Vietnam.

And now in Afghanistan.

A few of our own troops apparently don’t understand our own nation’s historical and cultural influences– because if they did, if they truly understood the basis of our First Amendment, the very last thing they would do is burn the Koran, accidentally or otherwise.

Burning the Koran is about the most un-American way for anyone to behave, on our soil or anywhere else.

We don’t burn books in this country because we come from a people who were oppressed. A people whose governing authority believed that books were only for a certain class of people — the wealthy and powerful blue bloods. Our ancestors lived in a place and time that believed only the privileged should be taught to read and be given access to books.

So to go into a country where the public-at-large has experienced that same sort of oppression and take the only book that they know well, a book that they regard as holy, a book that holds for them truths so often denied them, and burn it, shows appalling ignorance on behalf of the American troops who did the burning.

It should surprise no one then that such ignorance has incited Afghans to anger.

The real tragedy in all of this is that it is the actions of the ignorant few that has led to the violent deaths of the innocent multitudes.

How can we ever help others gain their freedoms if we fail to treat them with dignity and respect in the process?