I wish the Mayans were right 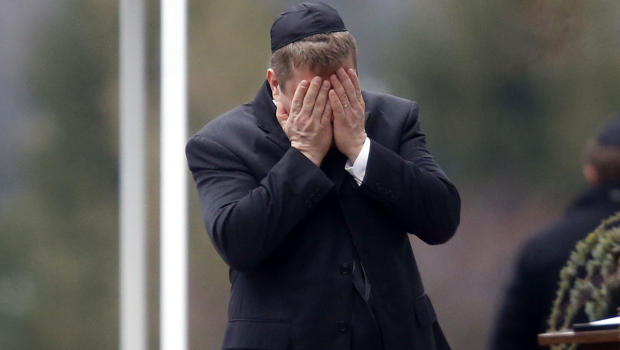 For the past four months it has felt like somebody pushed my head underwater into the pool of grief and is holding it there, attempting to drown me. I can’t come up from air until the one thing I don’t want to happen —  my mother’s death — happens.

Then came the massacre at Newtown.  I can’t quit thinking about those babies and their families.

Underwater, all I can hear are the horrific wails of the men and women whose babies have been slayed, like the ones Herod had murdered. I hear brothers and sisters, mothers and fathers crying over all those babies killed, like the Scriptures tell us:

God’s angel showed up again in Joseph’s dream and commanded, “Get up. Take the child and his mother and flee to Egypt. Stay until further notice. Herod is on the hunt for this child, and wants to kill him.”

Joseph obeyed. He got up, took the child and his mother under cover of darkness. They were out of town and well on their way by daylight. They lived in Egypt until Herod’s death. This Egyptian exile fulfilled what Hosea had preached: “I called my son out of Egypt.”

Herod, when he realized that the scholars had tricked him, flew into a rage. He commanded the murder of every little boy two years old and under who lived in Bethlehem and its surrounding hills. (He determined that age from information he’d gotten from the scholars.) That’s when Jeremiah’s sermon was fulfilled:

A sound was heard in Ramah,

weeping and much lament.
Rachel weeping for her children,
Rachel refusing all solace,
Her children gone,
dead and buried.

I wish the Mayans were right. I wish the world were ending. I wish the wailing would stop. I wish those families were not going to wake up this Christmas morning and every Christmas from here on out weeping for their dead children, or dead mothers, aching for the embrace of them.

I think about all those unopened Christmas gifts, and about the Sandy Hook children who died knowing that they would never get to see the hope that is Christmas morning.  I find little comfort knowing all those children are in the arms of Jesus. I suppose that makes me a terrible Christian but those babies belong in the arms of their mamas and daddies.

And it is so damn unfair and wrong and wretched and all things evil and wicked, and The Destroyer points to the scoreboard and taunts the crowd with the number.

I am submerged, along with many of you, in cold stilled darkness, awaiting, hoping, aching.

Just trying to breathe without choking to death.

I keep telling myself to not think about all those children huddled together in that closet and the gunman screaming, Let me in! Let me in!

So I asked Mama if her family celebrated Christmas when she was a little girl.

Not much, she says. But there was this one gift, Mama remembered so clearly she etched it out for me with her finger on the wall beside her, telling me it looked like this: A rectangle desk with two holders built into each end to hold pencils and crayons.

Grandma Ruth, her momma, bought it for her.

But Uncle Carl and his first wife had a baby who died, stillborn, nobody knows why, and they put that baby’s coffin on Mama’s desk, with the baby inside it, so the neighbors could come by the house for the viewing and when they took that coffin away and put that baby in the cold, cold ground, there was a scratch all along the top of Mama’s lone treasure.

It upset the little girl in her, having her desk marred up that way. Mama was never able again to sit down at that desk and imagine anything but the dead baby inside that casket.

And that is what I think Newtown has done to this nation — carved deeply into us the memory of babies in caskets, and a Christmas where the silence is filled with the wails of parents in mourning.

I want to take a line straight from a Flannery O’Connor short story and yell at all the demons looking to assault each and everyone of us: “STOP! I am a Temple of the Holy Ghost!”

If only there was some mysterious mantra that we could chant that would stop killers in their tracks, make them lay down their semi-automatics, and fall to their knees, seeking mercy from the God who saves, even the worst of these.

I wish there was a happy tune we could learn to whistle like Anna, the teacher, taught the children in The King and I to do whenever they were afraid.

If only there was a protective whistle, or a magic mantra we could teach the children to sing or shout: “STOP!! I am a Temple of the Holy Ghost!

One that we could repeat ourselves, so that we, too, could quit being so afraid.

I have never understood Advent like I understand it this year. This longing, this actual physical aching for Christ’s appearance.