Is Civil Marriage between Gay Couples Good for Society? 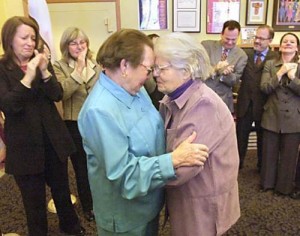 Is Civil Marriage between Gay Couples Good for Society?

That’s the question Douglas Wilson and Andrew Sullivan debated recently at the University of Idaho. The best thing about the debate was moderator Peter Hitchens, who interjected levity into the long-winded. Folks like Peter Leithart and  Denny Burk have been chiming in on the debate. You can find the debate at CanonWired.com

I know people who ascribe to and applaud the reformed theology embraced by Douglas Wilson.

Douglas Wilson and I don’t agree on marriage even for straight people. Tim is not the “head” of our marriage. We are equal partners in this endeavor.  Tim is no more responsible for the success of our family/marriage than I am. He is not the boss of me, nor I him.

Okay. Well. Maybe not kangaroos but marriage between threesomes and kissing cousins and such.

But here’s the thing I don’t get.

Throughout the course of human history and world practices, marriage between threesomes and cousins has been the norm.

Used to be in the land before America, polygamy and marrying within one’s family clan was the common practice. Nobody thought it was weird. It was the way of the world.

But, yes, it is also true that the historical view of gay relationships has been a negative one. Gays have widely been regarded as those given over to perverse sexual appetites.

Which is exactly why Gay marriage ought to be considered a  move in the right direction.

The fact that Gays want to enter into committed, monogamous relationship is a statement that they want to distance themselves from the negative stereotypes of the past.

Getting married is a way of telling the rest of us that Gays value relationship more than sex. Gay marriage is a public proclamation that speaks to intimacy and commitment, not appetites gone wild.

Thus, the Gay Marriage movement ought to be viewed as a triumphant move in the right direction because nowhere else in history do we see gay sexual involvement seeking out committed marriage relationships.

Ultimately, allowing for the civil union of Gays is an idea that the moral majority and religiously reformed ought to embrace as affirmation of marriage, and a move away from the perversions of the past.

Gay Marriage is not something to be feared.

Gay or straight, we should be applauding and supporting those who desire to honor the time-honored traditions of marriage.

How can a desire to love, honor and cherish one another, to be faithful to one another, be a threat to society?

March 4, 2013
Why the world is so angry with Christians
Next Post

March 8, 2013 The best dream I never had
Recent Comments
26 Comments | Leave a Comment
Browse Our Archives
get the latest from
Evangelical
Sign up for our newsletter
POPULAR AT PATHEOS Evangelical
1

Not a Fair Race: The Bible, injustice, and...
To deny the presence of systemic racism in America one must turn...
view all Evangelical blogs
What Are Your Thoughts?leave a comment
Copyright 2008-2021, Patheos. All rights reserved.