Because you are such devoted friends, I have a little secret to share with you: 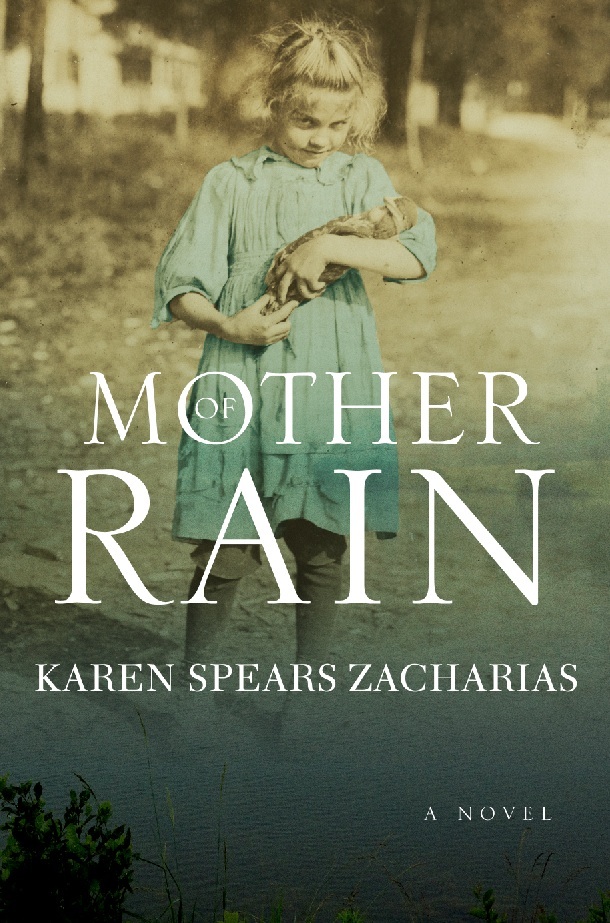 This is the cover of my debut novel coming in September from Mercer University Press.

We have all worked arduously on every aspect of this book for you all.

So do me a favor and tell your librarian. Tell your bookstore owners. Tell your book clubs. Tell your bloggers and book reviewers. Feel free to share it any which way you please, but do include Facebook and Twitter.

Here’s my promise to you: This is one story that is going to keep you awake at night.

Jacket Flap for MOTHER OF RAIN:

“Maizee Hurd was an easy target for hard times,” according to Burdy
Luttrell, the town healer. Burdy is a Melungeon woman with striking features and
mysterious ways. She owns the land the Hurds leased following their marriage on
June 3, 1940.

Maizee moved upriver at the age of ten after tragedy struck, and she was sent
off to be raised by a childless aunt and her doctor husband. Shortly after Maizee’s
ferry boat arrival in the rural mountain community of Christian Bend—carrying
only a small suitcase, her mama’s Bible, and her doll Hitty—the young girl began
hearing the voices that would continue to torment her.

It was the tender love of her husband Zeb and their shared passion for the
Appalachian hills and rivers of East Tennessee that helped quiet the voices. But,
as World War II tears through Europe, and Zeb prepares for deployment, Maizee’s
life is rocked by the ripples of war. Despite the love that carried her through the
birth of their son, Rain, and the boy’s subsequent illness that rendered him deaf,
Maizee can’t silence the demons in her own head. The voices have returned with
a vengeance and a plan.

Karen Spears Zacharias is a daughter of Appalachia, a descendant of founding
families of Hawkins County, Tennessee. She learned the craft of storytelling
from her aunt Cil Christian of Christian Bend, Tennessee. She is the author of
A Silence of Mockingbirds: The Memoir of Murder. Zacharias has written for
Huffington Post, New York Times, CNN,and National Public Radio. She teaches
at Central Washington University in Ellensburg, Washington, and blogs at
Patheos.com.

Early Praise for Mother of Rain:

Karen Spears Zacharias has carved a brilliant gem of a novel out of hard, uncompromising times and lives. Her remote mountain setting conceals misery, mystery, and madness — but also love, which comes in many forms. Zacharias examines these intertwined lives with great compassion and daring; she is a wonderful writer.

Karen Spears Zacharias captures the humor, spirituality and language of Appalachia with stunning authenticity, through characters that leap off the page. With Mother of Rain, Zacharias has done her part to help preserve our mountain heritage for future generations.

Evocative depiction of the hills and hollows, the language, lore, and beliefs of rural Upper East Tennessee in the 40’s. Karen Spears Zacharias paints an affectionate picture of simple people struggling to cope with social problems that we haven’t managed to overcome in the 21st century. From the opening chapter, I was hooked.

An evocative and haunting debut. The unforgettable story of Maizee Hurd is one of hardscrabble life in the mountains of East Tennessee—a world filled with the mystery of the “old ways,” where loss and tragedy are as commonplace as rain. With clarity and great compassion, Karen Spears Zacharias captures the fragility of the human heart. I could still hear the cadence of Appalachian voices long after I turned the last page.

-Todd Johnson, author of “The Sweet By and By”

The story of Maizee both shocks and endears the reader to Mother of Rain, the beautifully, eerie debut novel by Karen Spears Zacharias. Like a handcrafted wedding quilt, Zacharias’s prose weaves the tangle of hardscrabble lives into old fashion Appalachia storytelling.

Karen Zacharias’ journalistic eye served her well with her debut novel, Mother of Rain. Zacharias perfectly captures the haunting beauty and customs of Depression era Appalachia. Mother of Rain  is an unflinching and compelling story of troubled love and redemption in a mystical time and place. Maizee is one of those magical characters that readers will be thinking about long after the last page has been turned.

– Michael Morris, author of “Man in the Blue Moon” and “Slow Way Home.”

For more information about the book or the author, contact khandschuch@gmail.com

June 16, 2013 Some of the Best Mothers are Fathers
Recent Comments
4 Comments | Leave a Comment
Browse Our Archives
Follow Us!