The funeral service was held Wednesday morning, August 3, 1966, at McCloud Baptist Church. Mama was up at daybreak. I don’t think she’d slept at all the night before. I could hear her trying to move quietly around the trailer, so as not to wake any of us.

Shortly before the sun scrubbed the sky pink, I could hear a pot of coffee percolating. I loved to watch the coffee darken as it thup-thup-thupped through the glass knob on top of the tin pot.

“What are you doing up so early, sis?” Mama asked as I wandered into the kitchen. She was sitting at the dinette table, smoking a cigarette, sipping a cup of black coffee.

“I dunno,” I whispered. Frankie was asleep on the couch. I didn’t want to wake him. I liked having moments alone with Mama, without my brother or sister intruding. I walked over and stood behind Mama’s chair and wrapped my arms around her neck. She patted my hands. We didn’t say anything. We just sat there, both wishing that dawn would never break on this awfully sad day.

Uncle Woody and Aunt Gertie and their two girls came over at about 7 A.M. Gertie offered to help Mama get us kids ready for the funeral. Woody was there to tend to Grandpa Harve. Everybody needed a bath. Grandpa would need a shave. Somebody would have to help Linda and me fix our hair. Susie, Woody’s oldest daughter, was given the chore of bathing Linda. Susie didn’t like being given chores, ever. And Linda was a modest girl who didn’t like other people giving her baths, ever. Linda started off the morning sore over that bath.

Gertie fixed us kids a pan of oatmeal. Nobody felt like eating, but we did it anyway. It never occurred to us not to do what we were told. So when Gertie handed us each a bowl of oatmeal and told us to hurry up and eat our breakfast, that’s what we did.

After breakfast, we shimmied into cotton slips and those navy blue dresses with the red ties that Mama had bought us at Parks-Belk Department Store. Gertie and Susie worked over our hair. Linda and I both had short pixie cuts. Our fine hair stood straight up in the back if somebody didn’t pat it down with Dippity-do gel. Gertie smeared our hair down, then Susie gave us each a shot of hair spray. We put on our anklet socks, patent-leathers and then the little matching jackets to our dresses.

Once we were dressed, we sat quietly in the living room, watching the black-and-white television waiting on Mama. Frankie was the only one of us kids who’d ever been to a funeral before. He’d gone to Granny Ruth’s service. Linda and I didn’t know what to expect. Nobody bothered to tell us, and we didn’t think to ask.

Mama came out of her bedroom dressed in a navy blue suit, with matching jacket, shoes, nylons, and purse. In one hand she carried a white handkerchief, in the other a pair of white gloves. Mama was a pretty woman and I loved to see her all dressed up. She was naturally dark but she toasted golden brown during the summer months, so nearly any color looked more vivid on her.

But not on this day. On this day Mama looked pasty pale, the color of mold before it goes green. Pain hooded her dark eyes and drew her lips into a tight line. She had that horrified look cats get when they are tossed into a tub of cold water. I could almost feel her longing to run far, far away, to someplace quiet where she could just shake the day off. 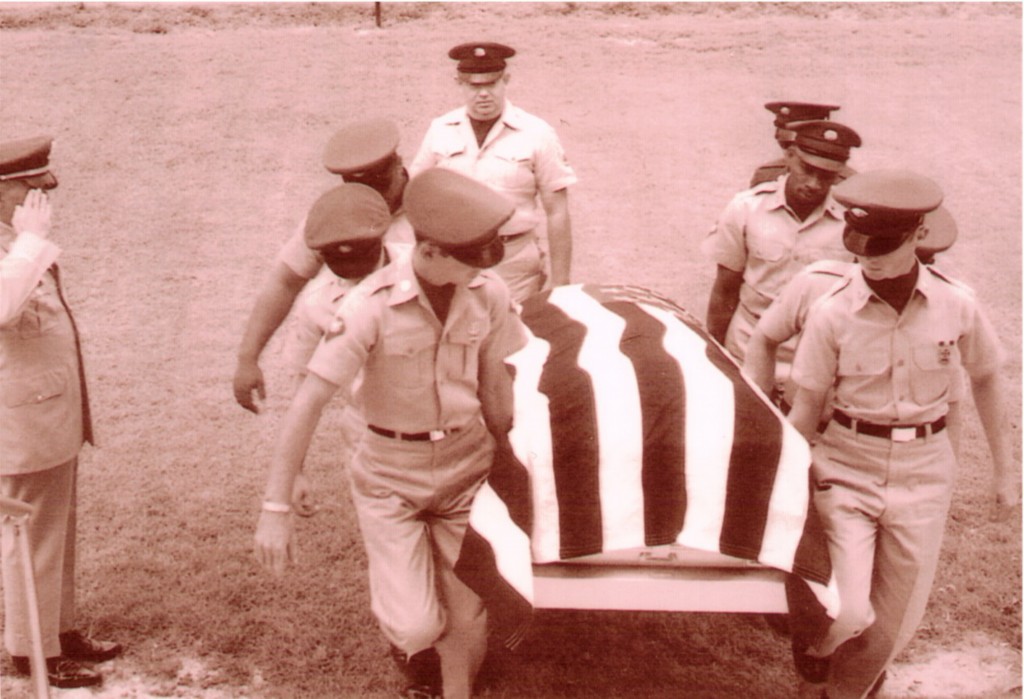 McCloud Baptist was a simple country church, replete with heart-pine floors and varnished pine pews, minus any cushions. It could seat about 150 people comfortably and about 200 if everyone scooted together so that nobody had any elbow room. On a typical Sunday, though, only about 50 people turned out for services and about two-hundred dollars was taken up in offering. I know this because on each side of the altar hung scoreboards that listed “Attendance Last Sunday” and “Giving Last Sunday” as well as “Attendance Today” and “Giving Today.” There was also a clock on the far left wall, behind the podium, so people could time the preacher if he got a little long-winded, as Southern preachers are prone to do.

On the day of Daddy’s funeral, those attendance reports were nearly hidden behind the bushels of flowers that lined the altar. I swear every florist in Hawkins and Greene Counties must’ve run out of flowers that day. Stretching clear from one end of the altar to the other, was an arch of pink roses, white carnations, and pink-and-white Stargazer lilies. Tucked into the corners and every empty space around the altar were wreaths fashioned in patriotic colors, red carnations set off with white lilies and red or navy ribbon. To the left of the altar was a wreath so large it looked like a tree of white roses. A taller bouquet across the altar was made from dozens of yellow roses. Mama always said yellow roses meant good-bye.

A bounty of flowers from all those country people. I’m sure some families must have spent a month’s worth of groceries on their tributes to my father. I can’t look at the photos of those flowers without weeping over the good-hearted people who sent them.

The most elaborate arrangement of all came from Mama. It was as big as a bush and made of hundreds of long-stemmed red roses and pointy white spires. In the center was a big red bow. On one side of the bow four white plastic doves took to flight, and on the other side was a flag. Traditional symbols of peace and freedom. But on that particular day, the doves in flight bothered me. We’d always been a family of five. There should’ve been five doves. Not four. Was this some florist’s bad poetry? Had Mama told them to only put four doves on that wreath? I didn’t give a care about peace or freedom. I just wanted my daddy back home, alive.

The church pews were packed full. A crowd of people stood at the back of the church and flowed out into the foyer, over the steps and into the yard. It looked like the Red Sea parted, only this was a sea was made of my father and my mother’s people. Tivus Spears was there. He was my Grandfather Pap’s brother. A bunch of Louvenia Kincer’s kids showed up. Louvenia was Granny Leona’s sister.  Dale, Daddy’s best childhood bud, and his wife were there. There were townspeople whose names I didn’t know from Church Hill, Rogersville, Persia, and Kingsport.

Linda sat on one side of Mama, Frankie the other side, I sat next to Linda. Grandpa Harve sat beside Uncle Woody and his family.

Six young soldiers, four of them white, two of them black, carried my father’s flag-draped coffin into the church. They were dressed in heavily starched khakis, red neck scarves, and green hats with brass insignia. A contingency of other soldiers stood at attention and saluted my father’s coffin as it was carried past.

There were no fancy choirs in robes or special solos. Daddy’s beloved cousin Mary Ellen, the lady with the beautiful red hair, played the organ. She must’ve played the music from memory, because she couldn’t have seen any sheet music through her own tears. Mama grasped Linda’s hand in her gloved one while the congregation sang “Rock of Ages.” She kept reaching up, wiping away tears, but Mama wasn’t sobbing in hysterics or anything like that. Nobody was. There was simply a constant sound of muffled weeping from throughout the church. I can’t remember anything Preacher Jinks or anybody else said about Daddy at the funeral.

Echoes from the battlefields of Vietnam’s Central Highlands settled into the foothills of Tennessee’s Smoky Mountains that morning. It was the sound of a shattered, shell-shocked people wandering helplessly, hopelessly, searching for a comfort that could not, would not be found. I didn’t know it then, but my father’s death had intricately linked the mountain people of these two countries together in a spiritual way that had nothing to do with churches and preachers and traditional hymns but had everything to do with blood sacrifice.

Karen Spears Zacharias is a Gold Star Daughter and author of  the memoir After the Flag has been Folded, available in paperback and Kindle. This is an excerpt from her family’s memoir.