L.A.’s Evangelizing Priest on ‘A.D.,’ the Jewish People & the Way of Francis 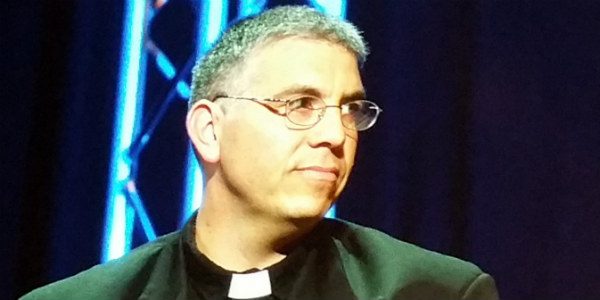 After a long parade of only Protestant and Evangelical pastors as guests, the 10th episode of “Beyond A.D.” — the Web companion talk show to NBC’s New Testament drama “A.D.: The Bible Continues” — available online at NBC.com on Sunday, June 14, finally features a Catholic priest (about time, since we all know what Church is being founded before our eyes).

Father Edward Benioff has an unusual background. The son of a Jewish father and a Latina Catholic mother, Benioff, 44, didn’t enter the priesthood until his late 30s, after a previous career as a teacher.

Apparently his dad is happy to have a priest for a son.

“He loves it,” said Benioff. “He’s a good man; he’s proud of me. He’s really come to appreciate Catholicism. I’m proud to call him my father.”

Radiate LA is the Archdiocese of Los Angeles’ Office of New Evangelization. Archbishop José H. Gomez established the office in 2013, appointing Father Ed Benioff as its director. Radiate LA coordinates the local Church’s programs to spread the Gospel. How? By increasing Catholics’ knowledge and love of their faith and inspiring them to pray and perform works of mercy.

Talking before the taping, Benioff had an idea of what he’s on the show to discuss, and a lot of that has to do with the Apostles’ efforts to evangelize their fellow Jews while still not losing touch with the Temple in Jerusalem and it High Priest Caiaphas (Richard Coyle, who talked to me here).

“We want to talk about the wonderful movement of Christianity from Judaism,” he said, “that the Apostles, all of them, were steeped in Judaism. It’s a wonderful intersection of ethnicity, religion and civil government, so their identity is totally Jewish. Even to the very end, Paul, in his letters, says, ‘I’m a Jew; I’m a Pharisee.’

“So, one of the great things we see in this episode is that tension. They want to work with Caiaphas; they want to work with the Temple, because they’re Jewish. Jesus was Jewish. As we know from history, it wasn’t until later that there’s a sharp demarcation [between Jew and Gentile].

“We know that after Jesus rescurrected and ascended, the Apostles knew how precious the Chosen People were to him. That’s why you see, in this episode, they’re really reaching out, trying to reconcile.

“I love that element, because my father’s Jewish, and my mother’s Latina Catholics, so I love that Jewish/Catholic mix.”

Asked how modern Catholics should think about the Jewish people, Benioff said, “In the Gospel of Luke, Jesus says, ‘Salvation is from the Jews.’ In a proper Christian context, it’s seen as a fulfillment of Judaism. Jesus said, ‘I didn’t come to abolish the law, but to fulfill it.’ That’s why a Christian should always have tremendous reverence for the Jewish people, and we haven’t always done a good job of that.

“But, from a theological standpoint, there should always be a profound reverence.”

There’s an ongoing debate in Catholicism about whether there should be an active evangelization of Jewish people. Benioff thinks we need to look first at the larger question of how we do all evangelization.

“I’m in charge of evangelization for the Archdiocese,” he said, “and the Franciscan way is best. That’s why Pope Francis took the name Francis, ‘Preach the Gospel always only use words when necessary…'”

In my ongoing quest to correct the record on St. Francis, my confirmation saint, I reminded Benioff that there’s no evidence that Francis ever said that, and that he was actually a preacher by trade, so it’s unlikely he would agree with that assessment (even Evangelicals know that) — unless you take it in the context of walking the talk.

“He never said that,” agreed Benioff, “but it was attributed to him. The Franciscan tradition leans heavily on mercy, going out there. We see that in Jesus. He tells us in the Gospel of Matthew, that people will give glory to God by seeing your good works.

“Not by Bible-thumping, not by beating people over the head with doctrine, but by your good works, because they’re going to touch the heart. And, if it touches the heart, people are going to believe in mercy and goodness. That’s why, you’re right, we can’t give that quote to Francis, but that was the spirit of his community.

“That would be the way we need to evangelize in the modern world. We don’t need to get into debates and arguments; we just incarnate love. Then, when someone asks us the reason for our hope, then we talk about the Lord Jesus, but not in an aggressive, not in an ‘I’m right; you’re wrong’ type of way. ‘No, this is the reason for my hope.’

“Even Pope Benedict talked about this. He said, ‘Hopefully, we learn, we don’t evangelize by proselytization, but by attraction.’ How do you attract people? You’ve got to have that love in you.”

As to the Jewish people specifically, Benioff said, “Do we evangelize our Jewish brothers and sisters? I would say yes, but in that Franciscan, Pope Francis way, not in a pushy way.”

Benioff also emphasizes that while evangelization seems to be a reaching out, it actually begins with an inward journey, through prayer, sacraments, contemplation and meditation.

“We live in a very busy and noisy culture now,” he said, “so before you go out, you’ve got to get filled with the spirit. You can’t give what you don’t have.”

“A.D.: The Bible Continues” airs Sundays at 9 p.m. ET/PT (preceded by a repeat of the previous week’s episode).

Here’s a peek at Benioff’s episode of “Beyond A.D.” with fellow guest Pat Boone (click here to see my interview with him over on CatholicVote): 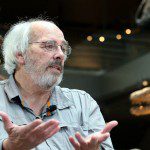 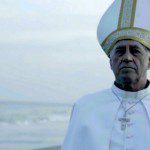 June 14, 2015 Pope Goes Full-Metal Francis in Trailer for 'The Encyclical'
Recent Comments
0 | Leave a Comment
"Great review and perspective, Kate. Thanks for reminding me about Miss Luba and other wonderful ..."
Steve Bailey Watching ‘The Jesus Music’ Is Like ..."
"Sounds sort of like a cross between Battle Royale and 13 Tzameti."
Goat Plissken Netflix’s ‘Squid Game’: Violent, Engrossing Korean ..."
"What do you think of Bishops trashing Pope Francis name, and trying to turn religion ..."
oneworlddude Papal Biographer Austen Ivereigh on PBS’ ..."
"What do you think of Pope Francis taking action against celebration of the Latin Mass, ..."
See Noevo Papal Biographer Austen Ivereigh on PBS’ ..."
Browse Our Archives
get the latest updates from
Kate O'Hare's Pax Culturati
and the Patheos
Catholic
Channel
POPULAR AT PATHEOS Catholic
1