‘Thirteen Lives’: A Multinational Miracle in Defense of Life in a Thai Cave

It would have been easier to let them die. Instead, rescuers tried the ultimate Hail Mary play to save Thirteen Lives.

In June 2018, early monsoon flooding trapped the 12 members of the Wild Boars, a youth soccer team, and their coach deep into the Tham Luang Nang Non cave in northern Thailand.

The 18-day effort to rescue them required help from all over Thailand and around the world and ultimately cost the lives of two men — but the whole team and the coach survived.

You must know that, or you may not survive the nearly unbearable tension in director Ron Howard’s Thirteen Lives, hitting theaters on July 29 — and then Amazon Prime Video on Aug. 5 — a scripted version of the events seen previously in the National Geographic documentary The Rescue.

Given the difficulty, indeed, near impossibility, of rescue, there were proposals to leave the boys and the coach in the cave until monsoon rains abated in October, by which time they surely would have been either drowned or asphyxiated.

Millions of dollars would have been saved, thousands of people would have been spared risk and effort, the two ultimate casualties may have lived longer lives, and their loved ones would not have been grieved.

But, the children and the coach would be dead, and in the end, no one could countenance that. So, the impossible was achieved.

Telling the Amazing story of How Thirteen Lives Were Saved

Working from a taut yet humane script by a two-time Oscar nominee, Brit William Nicholson, from a story by Nicholson and Don MacPherson, Howard throws a wide net in Thirteen Lives, capturing the tale from many angles.

Viggo Mortensen and Colin Farrell star as volunteer British cave-diving experts Rick Stanton and John Volanthen, respectively, with Joel Edgerton as Dr. Richard “Harry” Harris, an Australian anesthesiologist. Having also seen The Rescue, I can say they got the essence of the real-life men.

Playing other volunteer divers are Paul Gleeson and Tom Bateman.

The story also focuses on the boys’ families, Thai officials and the brave Thai Royal Navy SEALs. There’s another volunteer, a Thai native who had been living in America, who provides expertise to help stem the flooding from the rain-soaked mountain above the cave (by drowning the rice fields of local farmers, who consent to the sacrifice).

Filmed in Thailand and Australia, the cast includes many other international actors, including Pattrakorn Tungsupakul as the mother of the youngest boy; Tui Thiraphat Sajakul as a Navy SEAL captain; James Teeradon Supapunpinyo as the coach; Sahajak Boonthanakit as the local governor, and Weir Sukollawat Kanarot as a former Thai Navy SEAL who returned to help.

After several unsuccessful attempts, the decision was made for Dr. Harris to sedate the boys, and for the experienced cave divers to then swim them out. It may sound simple, but as the film demonstrates, it was fiendishly difficult and extraordinarily dangerous.

This is Not the Easiest Movie to Watch

Be warned, Thirteen Lives is an intense experience, outranking even the tension in Ron Howard’s Apollo 13, which chronicles another real-life high-wire survival story. 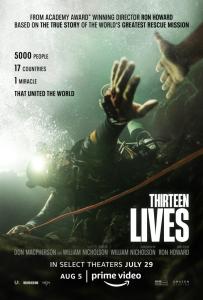 If you’re claustrophobic or afraid of water, it might be too difficult to watch. When I’m nervous, I tend to shiver, and I shivered my way through most of this movie.

But, it’s an example of what can be accomplished when human beings join hands in defense of life. As the film’s poster says, it took 5,000 people and 17 countries to perform one miracle.

I Do Have an Issue, But It’s Not About Thirteen Lives

Thirteen Lives comes from Ron Howard and Brian Grazer’s Imagine Entertainment, the same company behind the recent FX series Under the Banner of Heaven.

Elements of the local faith around the Thai cave — a mix of Buddhism, animism and folklore — are woven into Thirteen Lives. Mortensen’s character, diver Rick Stanton, starts out a hardened skeptic about the value of faith but winds up perhaps having a bit of a change of heart.

On the whole, the film is respectful and generous in dealing with the beliefs of the local Thai people.

The same can’t be said about the Church of Jesus Christ of Latter-day Saints in Under the Banner of Heaven (which I wrote about in depth here).

Based on a nonfiction book by a nonbeliever about murders committed by men excommunicated from the LDS Church, and written by an apostate from the LDS Church who has become an LGBT activist, the miniseries doesn’t present a particularly balanced or, I thought, fair depiction of Mormon life.

It’s certainly less respectful or charitable toward that faith than Thirteen Lives is toward what it depicts.

These are different projects, written by different people, but they come from the same company. And, by the way, this is also the company that produced the films based on author Dan Brown’s pulp thrillers, which tell fantastical tales supposedly (but not really) about the Catholic Church.

I applaud the portrayal of faith in Thirteen Lives. I just wish the same attitude permeated some of Imagine’s other productions. 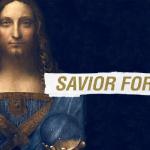 July 26, 2022
'Savior for Sale: Da Vinci's Lost Masterpiece?': Art Treasure or Fake, and Why THAT Buyer?
Next Post 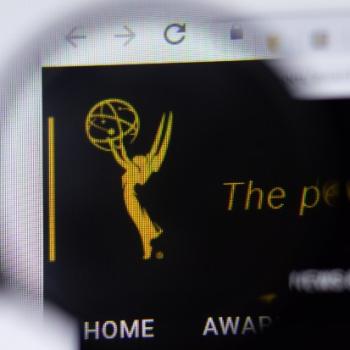