CATHOLIC WITNESS IN A NATION DIVIDED (Build the Church, Bless the Nation)

“Our problem isn’t in Washington; it’s in our parishes.  Only if we first build the Church can we, will we, bless the nation.”

Al Kresta, host of the popular “Kresta in the Afternoon” broadcast on Catholic radio and President and CEO of Ave Maria Communications, is talking about the Catholic vote in the 2012 election.  In November, according to the Pew Forum on Religion and Public Life, forty percent of Mass-attending Catholics voted for President Obama, a self-identified champion of two intrinsic evils:  (1) abortion, including partial-birth abortion; and (2) the redefinition of marriage.

Most elections don’t permit such black and white assessments.  In this case, however, Bishop Thomas Paprocki, bishop of Springfield in Illinois, concluded in a column in the Catholic Times on September 23, 2012:

“A vote for a candidate who promotes actions or behaviors that are intrinsically evil and gravely sinful makes you morally complicit and places the eternal salvation of your own soul in serious jeopardy.”

But despite the admonitions of Bishop Paprocki and other American Church leaders concerning the government’s far-reaching policies such as the HHS Mandate, a significant number of Catholics hit the polls in support of President Obama, who has been called the most pro-abortion president in our nation’s history. 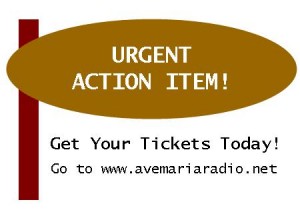 “Clearly,” says Kresta, “our own house is not in order. When the Church is so compromised that it fails to serve as a counter community forming a counter culture based on counter values and telling a counter story, we jeopardize our own salvation and our nation’s well-being.”

Kresta believes this is the time to refocus our efforts from the culture war model to a Catholic discipleship model. “Whether or not the culture war is over,” he says, “I can’t say. I know that because of Christ’s promise in Matthew 16:17-19, the war for souls is not over and that battle takes place with the Church not the state as the central actor.”

Cognizant of their mission to build the Church and thereby to bless the nation, on Saturday, January 12, 2013, Ave Maria Communications will offer a one-day conference “Catholic Witness in a Nation Divided” on the campus of Eastern Michigan University.  The conference will address four areas of concern to Catholics following the 2012 election:  religious liberty, the definition of marriage, life issues, and immigration. 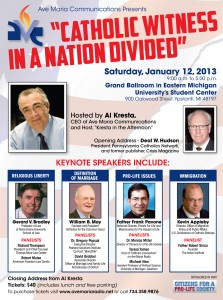 “We see this as a work of the New Evangelization,” Kresta explains.  “After the conference, we will assess the suggestions and response and then plan our next move.

“The fundamental problem, it seems to me, is that most Catholics still don’t see their lives as one of intentional discipleship. This is why so many operate without a sense of divine purpose in their lives. Why is there this absence of mission in, I would guess, at least half of American Catholics?  Some would place the number up at 85%. I think, among other reasons, most Catholics have never been encouraged to take responsibility for their mission according to the Decree on the Apostolate of Lay People, especially para. 7. They have never considered what spiritual gifts they’ve received as a result of baptism and confirmation nor how they can use those gifts for the building up of the body according to 1 Cor 12:4-13 and Ephesians 4:4-16.”

The Conference will feature:

OPENING ADDRESS – Deal Hudson, President of the Pennsylvania Catholics Network and former publisher of Crisis Magazine, will introduce the conference.

RELIGIOUS LIBERTY – Gerard V. Bradley, professor of law at Notre Dame University School of Law, will address the area of religious liberty.  There will be a response and discussion by a panel including Richard Thompson,  president and chief counsel at the Thomas More Law Center; and Robert Muise, Co-Founder and Senior Counsel of the American Freedom Law Center.

DEFINITION OF MARRIAGE – William B. May, founder and president of Catholics for the Common Good, will be the keynote speaker on marriage, with a response from panelists Dr. Gregory Popcak, executive director of the Pastoral Solutions Institute and host of More2life on Ave Maria Radio, and David Grobbel, associate director of the Office of Marriage and Family Ministry in the Archdiocese of Detroit.

PRO-LIFE ISSUES – The keynote presenter on Life issues will be Father Frank Pavone, national director of Priests For Life.  Responding to his presentation will be panelists Dr. Monica Miller, director of Citizens for a Pro-Life Society; Michael J. New, assistant professor of political science at UM-Dearborn and columnist at National Review Online; and Teresa Tomeo, host of Catholic Connection on Ave Maria Radio.

IMMIGRATION – Kevin Appleby, director of the Office of Migration Policy and Public Affairs, U.S. Conference of Catholic Bishops, will be the keynote speaker on immigration.  Fr. Robert Sirico, president of the Acton Institute for the Study of Religion and Liberty, will respond.

CLOSING ADDRESS – Al Kresta, CEO of Ave Maria Communications and host of the popular Kresta in the Afternoon on Ave Maria Radio, will moderate the panel discussions and deliver the closing address.

The conference will be held from 9:00 a.m. to 5:00 p.m. in the Grand Ballroom in Eastern Michigan University’s Student Center, located at 900 Oakwood Street, Ypsilanti, Michigan 48197.  The conference registration fee of $40 will include lunch and parking.  Clergy and Student rates are available.