A JUXTAPOSITION OF SYMBOLS: Keep Your Sacrifices Secret. And Plaster Ashes All Over Your Face.

A JUXTAPOSITION OF SYMBOLS: Keep Your Sacrifices Secret. And Plaster Ashes All Over Your Face. February 12, 2013 Kathy Schiffer

It’s kinda funny.  In the Gospel of Matthew, Jesus warns us against doing good in order to be seen.  He gives us three examples:

But tomorrow, Ash Wednesday, we seem to do just the opposite.  We plaster our suffering all over our foreheads, in the form of ashen crosses.

Who thought this was a good idea, anyway?

Tomorrow’s visible sacrifice, symbol of repentance, sorrow and humility—the smudgy symbol that greets passersby and announces “I’m a Christian!”—is a terse reminder of our humanity and our mortality.  The person who will benefit the most from his or her Lenten sacrifice is the one who perseveres quietly, with prayerful determination—not sniveling and complaining about the Friday abstinence or the lack of chocolate, but offering sacrifices and depriving himself in order to unite his small inconvenience with Christ’s infinitely greater sacrifice on the Cross.

I remember a time when I, a young university student, showed up for class on Ash Wednesday with one heck of a huge cross emblazoned on my forehead.  A student sitting beside me tapped me on the shoulder and whispered politely, “You have a smudge on your face!”  I laughed and explained that it was Ash Wednesday, and we had a pretty good discussion about sacrifice and symbol.  It was an evangelization moment that would never have happened on a regular Wednesday evening.

Mother Theresa penned a beautiful reflection titled “It’s Between You and God.” As we begin forty days of penitence, let’s keep that in mind.

IT’S BETWEEN YOU AND GOD

People are often unreasonable, illogical and self-centered.
Forgive them anyway.

If you are kind, people may accuse you of selfish, ulterior motives.
Be kind anyway.

If you are successful, you will win some false friends and some true enemies.
Succeed anyway.

What you spend years building, someone may destroy overnight.
Build anyway.

If you find serenity and happiness, others may be jealous.
Be happy anyway.

The good you do today, people will often forget tomorrow.
Do good anyway. 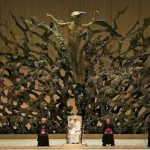