With Second Miracle Approved, JPII Likely to Be Canonized October 20!

The second miracle has been approved, and Blessed John Paul II is now one step closer to canonization.

In the Catholic Church, “canonization” is the process of formally declaring a person of heroic virtue to be a saint.  Catholics believe that saints are already in heaven; and canonized saints can be venerated (regarded with reverential respect), and their lives held up to Christians here on earth as examples to be imitated.  Two documented miracles are required before a formal declaration of sainthood can be made.

On Tuesday, June 18 in Vatican City, the board of theologians of the Congregation for the Causes of Saints approved the second miracle, opening the door to a declaration that Pope John Paul II did, indeed, live a life of heroic virtue, and that he is now in heaven with God.  This paves the way for the formal canonization, which will likely be on Sunday, October 20.

Pope John Paul II, one of the most popular popes in history, died in 2005 at the age of 84.  He was beatified (the first step along the way to canonization) on May 1, 2011, by his successor, Pope Benedict XVI.  The beatification followed the ruling by a Vatican commission which attributed to Pope John Paul II’s intervention the inexplicable recovery of a French nun, Sister Marie Simon-Pierre, from Parkinson’s Disease.

Details regarding the second miracle—the one which will lead to the former pope’s canonization—remain a closely guarded secret; but Vatican sources say that it will “amaze the world.”

I reported in April 2013 that the second miracle had been approved and the file forwarded to the Vatican’s Congregation for the Saints.  Although I got the date wrong in my headline (not in the article), I wrote then about the likelihood of a canonization ceremony taking place on October 20, just two days before JPII’s feastday.

And when Pope John Paul II was beatified in May 2011, I was there in Rome—attending the first-ever Vatican Blogfest.  I wrote about it and posted a photo montage from that incredible day, which I’m reposting here. 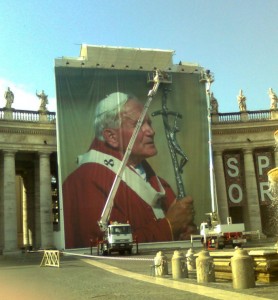 June 17, 2013
Obama Calls for End to Catholic Education in Northern Ireland
Next Post

It Begins With Wine at a...
Steel Magnificat
Related posts from Seasons of Grace