Two Popes Consecrate the Vatican to St. Michael the Archangel

Since his retirement, Pope Emeritus Benedict XVI has kept a low profile—living a life of quiet prayer and study in the home prepared for him in the Vatican Gardens.

So it was a treat for Vatican City State workers when Benedict joined his successor, Pope Francis, in the gardens on Friday, July 5, for the blessing of a statue of St. Michael the Archangel.  At the same time, Pope Francis consecrated the Vatican to the Archangel’s protection.

Pope Francis, in his remarks following the brief ceremony, noted that St. Michael defends the People of God from its enemy par excellence, the devil.  Even if the devil attempts to disfigure the face of the Archangel, the Pope said, and thus the face of humanity, St Michael wins, because God acts in him and is stronger.

POPE FRANCIS:   “We’ve gathered here today in the Vatican Gardens to unveil a sculpture of Saint Michael Archangel, the patron of Vatican City. It is something that had been planned a long time ago and that was approved by Pope Benedict XVI, whom we address with all our affection and thanksgiving. We also want to express to him our great joy in having him here today among us. Thank you so much.”

The statue is made of bronze and is about 16 feet high. 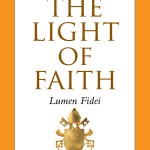