Liturgy is a contentious topic.

Often, traditionalists feel strongly that their preferred form of liturgy (the Extraordinary Form) is superior.  Those with a more modern bent are convinced the Novus Ordo is an improvement, and decry the idea of “going backwards” to the pre-Vatican liturgy.

I happened recently to see a comment posted by Sherry Weddell, founder of the Called and Gifted Workshops and author of several popular books including Forming Intentional Disciples

and The Catholic Spiritual Gifts Inventory 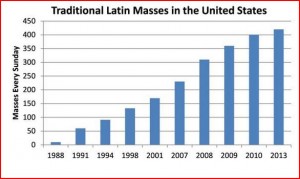 Sherry cited an article titled “New Priests and the Old Mass” which spotlighted the increase in interest in the Tridentine Mass among young, recently ordained priests.  Concurrent with this interest in traditional worship was an increase in the number of priestly vocations.

Sherry made a point that I’ve tried to make, as well:  Namely, that regardless of one’s personal preference, both forms of worship are legitimate and are accepted by the Church, and criticism of one’s fellow Catholics because they attend the other form is inappropriate and un-Christian.

In 10 years of commenting and posting online, I normally NEVER post on liturgical subjects at all because of the seeming inevitable descent into completely unedifying rancor that ensures. I’m making an exception here because of some rare hard data that I think gives a valuable perspective.

(But let me make it clear: This is a ZERO TOLERANCE zone for liturgical flamefests! Unedifying, rancorous comments here will vanish in a nanosecond and their author will be close behind.)

Now to the point: The article below states that there were 420 “weekly” Traditional Latin Masses (TLM) celebrated in the US in 2013.

One obvious question: Does “weekly” means these 420 TLMs are celebrated on weekends or simply once a week on any day of the week – so every Tuesday for instance? The evaluation below presume that “weekly” means “weekend”.

First observation: The growth rate in Traditional Masses between 2007 and 2010 was huge – 78%! Obviously there was a considerable amount of pent up demand.

Second observation: According to the graph, the rate of growth seems to have dropped off dramatically during the next 3 year period between 2010 and 2013. There was only 5% growth in the number of weekly TLMs during those three years.

If by “weekly”, we mean “weekend” TLMs, here’s what this translates into nationally.

In 2013, there are 17,413 parishes in the US who offer an average of 3.8 weekend Masses per parish which means that about 66,169 Masses were celebrated on an average weekend in the US. For a total US Catholic population of 78.2 million (this includes all who still claim a Catholic identity whether or not they are practicing) in 2013.

That means that the 420 weekend TLMs would make up about 6/10th of 1% of American weekend Masses in 2013. (If we divvy up the American Catholic population by TLM Masses, that’s 186,190 Catholics per TLM.)

The approximately 65,749 OF Masses celebrated would constitute 99.4% of American weekend Masses in 2013. (If we divvy up the American Catholic population by OF Masses, we find there is 1,189 Catholics per OF Mass.)

There are a number of important questions that could be asked of the existing data. But one thing I do want to point out:

The next time you read or hear someone talking about the Ordinary Form Mass as though it is a) invalid or b) technically valid but essentially corrupt and fruitless; 3) that those who attend the OF are not serious, faithful Catholics, are blind, spiritually shallow, etc.

*Remember they are talking about 99.4% of all the Masses offered in the United States every weekend!*

It is long past time for that kind of discourse to be rooted out of the Catholic community. No matter what Mass you attend or prefer, it is time to honor your Catholic brothers and sisters and treat them and the legitimate Mass they attend in obedience to God with charity and reverence for the whole resurrected Christ who is present there.