After a shocking incident in January in which Pope Francis released two white doves, only to see them killed by a crow and a seagull, the Swiss Guard has taken action to ensure that none of the Pope’s “peace doves” meet a similar fate in the future.

A bird of prey named “Sylvia” has been specially trained in northern Italy to protect the Pope’s doves.

This part of the story is true:  Two doves were killed in a brutal mid-air attack on January 26, after being released from the Pope’s window by children.

But the bird of prey being enlisted by the Swiss Guard?  That part is apparently an April Fool’s Day joke which is only now making its way into print.

Sky News in Australia reported that the Catholic weekly Credere (Believe) fell for the joke; and the story was presented as news in their Thursday edition.  Other newspapers around the world picked up on the story and reported it as fact.

I’ve noticed that those doves–which the Vatican releases several times a year as a symbol of peace–have caused considerable trouble in the past.  The doves have occasionally resisted release:  turning back to invade the Pope’s office in the Apostolic Palace, perching on the Pope’s shoulder or on the podium.  And of course, there’s the inevitable incidence of bird droppings on the heads of the faithful!

Here, a dove gets a little too chummy with Pope John Paul II and refuses to leave. 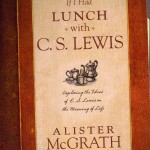 April 11, 2014
Learning from the Master: C.S. Lewis on Apologetics
Next Post

April 11, 2014 Traditional Latin Mass Finds Support Among Young Priests
Recent Comments
1 Comment | Leave a Comment
Browse Our Archives
get the latest from
Catholic
Sign up for our newsletter
POPULAR AT PATHEOS Catholic
1