Joseph Bottum’s “AN ANXIOUS AGE”: He Had Me at ‘Hello’ 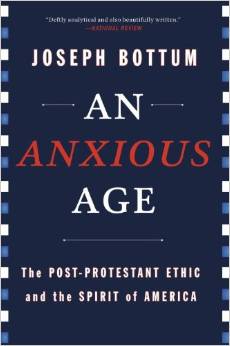 Joseph Bottum’s important new book An Anxious Age: The Post-Protestant Ethic and the Spirit of America

, has been sitting on my bedside table for a few months, just begging to be opened and sampled. I read a lot of books; I enjoy them, I often report on them. I just hadn’t gotten around to this one. Yet.

In fact, I’m not too proud to admit that it took a Comcast line breaking in our front yard (and the resultant loss of internet and cable service) that made me sit down this evening and crack open An Anxious Age with its patriotic, red/white/blue jacket.

But NOW… Now it’s 1:30 a.m., and here I am, spellbound by the combination of terse imagery and heady significance, the abundance of logic and the splash of irony in Bottum’s telling of the American sociological story. My husband is soundly sleeping. I turned off the light once, twice…. but I CAN’T PUT THIS BOOK DOWN!

Thanks a lot, Joseph.

In truth, I could spend an entire essay talking only about Bottum’s 12-page Preface.

He has schooled me in American history: Surely, I learned back in high school about our nation’s First Great Awakening in 1733; but alas, I was absent that day—or else (more likely) it just didn’t seem compelling at the time, when I’d just discovered glitter nail polish and Sadie Hawkins dances and sixteen-year-old boys.

I chuckled at his reminiscences about the “lifeboat theology” evident at a Catholic academic conference, and his reflection on the spiritual angst of the young protesters in the Occupy Wall Street protest movement, claiming to speak for the “99 percent.”

And Bottum’s “Erie Canal Thesis of American history”–the idea that we can’t explore the moral, social, and intellectual culture of any moment in American history without recognizing the central role played by Protestant Christianity, and especially its decline in membership? It’s brilliant.

But to the thesis itself:

Joseph Bottum analyzes two distinct social classes: those he calls the “Poster Children”, the college-educated elite who are the direct descendants of the Mainline Protestants; and those he terms the “Swallows of Capistrano”–the JPII Catholics, formed by the pontificate of Pope John Paul II.

The first group, the “Poster Children”, are, in Bottum’s words,

“the heirs and descendants of the social gospel movement. In their thoughts and in their words, in what they have done and what they have failed to do, they correspond precisely with the “ganglion chain of redeemed personalities in a commonwealth” for which Walter Rauschenbusch called in his 1912 Christianizing the Social Order.”

(Here, I had in mind a specific individual in my own social circle; and perhaps you can better understand Bottum’s analysis by applying his terminology to someone from among your own immediate family or close friends who fits the bill.)

In Bottum’s construct, the “Poster Children” see themselves as “redeemed” (although they don’t use that terminology). They probably don’t attend church, since church is itself part of the social problem, and they consider church attendance to be unnecessary for their redemption. Belief in Jesus does not typically inspire them for, as Bottum observes, the nation’s strong Christians often appear to the Poster Children to be on the wrong side of the social divide. And likewise Jesus, in their view, is not necessary for their redemption.

What really matters to this group is that they’ve been awakened from the slumber of past generations and they now see the evil that is spread over civilization. They’ve been “transformed” into the elect, repentant of their collective social sins. For the Poster Children, their self-esteem and confidence, the confidence that they have been “redeemed”, through their rejection of that metaphysical evil, which shows itself most of all in bigotry, militarism, the vulgar mob—and in Rauschenbusch’s six sins of society.

The Swallows of Capistrano

The second group which Bottum cites in his hefty analysis is the group he titles “Swallows of Capistrano”—Catholics formed by the pontificate of John Paul II. These are serious-minded young Catholics, intellectuals who experience their faith as an idea with a large set of social, political, and moral consequences.

It is this view—of faith as more than merely a religion, but as an idea which has profound consequences—that is both irritating and frightening to newspaper editors and college professors and political activists. These cultured despisers of religion, Bottum would say, can deal with faith as an illogical remnant of bygone ages; but as an idea? An idea is a problem; for truly, an idea can change the world.

Bottum ends his book with an imaginary meeting between two distinctly different women, each representing one of the two worldviews he’s described: the Poster Child Bonnie, and the Swallow of Capistrano, Eleanor. The scorn with which each regards the other rang true in my own lived experience, meeting people from both camps and reading the daily newspaper.

“The post-Protestant Bonnie’s multiple divorces and fractured family would horrify the younger Catholic woman. Her moral certainties would seem cheap, unearned, and deeply offensive: the old Mainline class would probably appear as over easy as an egg. Most of all, Bonnie’s claims of spirituality would strike Eleanor as theologically illiterate, metaphysically bizarre, and morally reprehensible in their self-centeredness.

Meanwhile, of course, confronted with the thought of Eleanor, Bonnie would find the younger woman a freak of backwardness, for shouldn’t each new generation be even more free of the past than the previous generation had been? If she could not dismiss Eleanor as stupid, Bonnie would probably suspect her of being sexually repressed. But regardless of what she perceived as the cause of Eleanor’s individual failure, the young Catholic’s existence would confirm Bonnie in her class’s belief that the ancient pall of social evil still hangs over the present.

The stark reality of that propositional chasm is frightening; Bottum insisted, though, that while the two women might despise one another in the abstract, they could enjoy one another’s company at dinner. There is some comfort, I suppose, to be gleaned from that.

is a well-researched and well-written description of the American political landscape. But in writing about it, I feel like the mythical prisoner in Plato’s cave—recounting one small slice of the whole, based on my limited perspective. Read the whole book! You’ll find yourself nodding in agreement at every new idea.

August 22, 2014
The Queenship of Mary Is Deeply Rooted in Scripture
Next Post

August 26, 2014 ....And Jesus Wept
Recent Comments
1 Comment | Leave a Comment
Browse Our Archives
get the latest from
Catholic
Sign up for our newsletter
POPULAR AT PATHEOS Catholic
1

Genocide Is Okay For Palestine?
Messy Inspirations
Related posts from Seasons of Grace