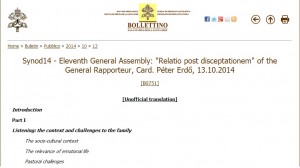 Well, now, here’s a scoop:  A new report from Catholic News Agency confirms what we believed, that there was a serious translation error in the Relatio post disceptationem.

Last week’s report from Rome caused the secular media to explode with enthusiasm, anticipating a “seismic shift” in Church teaching on the Eucharist, homosexuality, and the indissolubility of marriage.

At the same time, the first reports elicited concern among faithful Catholics and among the Synod Fathers themselves.  On October 14, the Holy See Press Office issued a declaration, clarifying that there has been no change in Church teaching as a result of the Synod, and explaining that the Relatio is only provisional–in effect, a “working document.”

In the past, synods have always conducted their business in Latin, a precise and unambiguous language.  This time, perhaps wanting to “smell like his sheep” as he recommended during the Chrism Mass on Holy Thursday in 2013, Pope Francis directed that the official language of the synod should be Italian.

Now it turns out that the English translation from the Italian original has sparked a needless controversy.

The original translation of paragraph 50, arguably the most controversial paragraph in the translation which was published last week, praised the gifts and talents homosexuals may give to the Christian community, and then asked:

An English translation provided by the Vatican asked,

“Are our communities capable of providing that, accepting and valuing their sexual orientation, without compromising Catholic doctrine on the family and matrimony?”

Out on the streets, that “valuing” of the homosexual orientation was interpreted as an endorsement.  It was as though the Synod Fathers were saying that different sexual orientations, like different species of flora and fauna, are not–as the Church has stated in the past–“intrinsically disordered.”  Rather, the Relatio seems to suggest, homosexuality is simply part of the rich diversity on the planet.

SO WHAT DOES THE CATHOLIC CHURCH REALLY TEACH?

To be clear, the Catholic Church has always opposed discrimination against or mistreatment of homosexuals, whether in practice or in law.  At the same time, though, the Church has been constant in her call to all believers–those with same-sex attraction and others–to practice chastity according to their state in life.

In October 1986, the Congregation for the Doctrine of the Faith under then-prefect Joseph Ratzinger (the future Pope Benedict XVI) issued a Letter to the Bishops of the Catholic Church on the Pastoral Care of Homosexual Persons.

Arguing against discrimination, the CDF says in Article 10:

It is deplorable that homosexual persons have been and are the objects of violent malice in speech or in action.  Such treatment deserves condemnation from the Church’s pastors wherever it occurs.  It reveals a kind of disregard for others which endangers the most fundamental principles of a healthy society.  The intrinsic dignity of each person must always be respected in word, in action and in law.

Is the homosexual person at fault for his sexual orientation?  The Church says no, perhaps not; but yes, like all others created with free will by a loving God, he is responsible for his behavior.  Paragraphs 11 and 12 explain:

It has been argued that the homosexual orientation in certain cases is not the result of deliberate choice; and so the homosexual person would hen have no choice but to behave in a homosexual fashion.  Lacking freedom, such a person, even if engaged in homosexual activity, would not be culpable.

Here, the Church’s wise moral tradition is necessary since it warns against generalizations in judging individual cases.  In fact, circumstances may exist, or may have existed in the past, which would reduce or remove the culpability of the individual in a given instance; or other circumstances may increase it.  What is at all costs to be avoided is the unfounded and demeaning assumption that the sexual behavior of homosexual persons is always and totally compulsive and therefore inculpable.  What is essential is that the fundamental liberty which characterizes the human person and gives him his dignity be recognized as belonging to the homosexual person as well.  As in every conversion from evil, the abandonment of homosexual activity will require a profound collaboration of the individual with God’s liberating grace.

What, then, are homosexual persons to do who seek to follow the Lord?  Fundamentally, they are called to enact the will of God in their life by joining whatever sufferings and difficulties they experience in virtue of their condition to the sacrifice of the Lord’s Cross.  That Cross, for the believer, is a fruitful sacrifice since from that death come life and redemption.  While any call to carry the cross or to understand a Christian’s suffering in this way will predictably be met with bitter ridicule by some, it should be remembered that this is the way to eternal life for all who follow Christ.

…Christians who are homosexual are called, as all of us are, to a chaste life.  As they dedicate their lives to understanding the nature of God’s personal call to them, they will be able to celebrate the Sacrament of Penance more faithfully and receive the Lord’s grace so freely offered there in order to convert their lives more fully to his Way.

Will the Catholic Church “change with the times”?  Yes.  Sometimes changes in culture will demand adjustments in practice.

But will the Church relinquish her role and responsibility to speak with clarity on matters of faith and morals, even in a culture which lacks moral certitude? No. Absolutely not.

One more point, on the matter of being “intrinsically disordered”:

There has been speculation, based on comments from one Cardinal, that the Church may relax its language in order to appeal to those who perhaps would be turned away and feel rejected.  Some writers have embraced the hope that the Church will see these same-sex attracted individuals as “different but not disordered.”  One writer called one’s sexuality a gift, and likened same-sex attraction to other abnormal conditions such as deafness or cognitive disabilities.  Deafness, explained one friend, may admit an individual to a group of like people, where friendships can be forged.

But I say no:  Deafness is not a “gift”.  Deafness may be the result of a congenital deficiency or an accident; but it is disordered, for God intended all to have the pleasure of that fifth sense of hearing.  A deaf person may, by the grace of God, live a life of beauty and significance despite the condition, not because of it.  The true gift is that from our flawed and humble selves, God can bring forth love and joy and meaning.

October 18, 2014 "Kiss of Peace" Becomes "Meaningful Eye Contact" to Protect Against Ebola
Recent Comments
5 Comments | Leave a Comment
Browse Our Archives
get the latest from
Catholic
Sign up for our newsletter
POPULAR AT PATHEOS Catholic
1