With Ebola now claiming more than 4,500 lives, the Diocese of Fort Worth, Texas has taken steps to reduce exposure to potential Ebola cases in their parishes during liturgical celebrations.

As of October 14, the World Health Organization (WHO), the U.S. Centers for Disease Control and Prevention (CDC), OCHA and local governments have reported a total of 9,216 suspected cases.   The threat is real:  At a press conference October 14, the assistant director-general of the WHO reported that there could be as many as 10,000 new Ebola cases per week by December 2014.

In response to the threat of new cases entering the United States, the Very Rev. Karl W. Schilken, Vicar General of the Diocese of Fort Worth, has re-instituted liturgical adaptations that the Catholic Diocese of Fort Worth has used in the past during the influenza season. The adaptations go into effect immediately and are intended to limit contact. 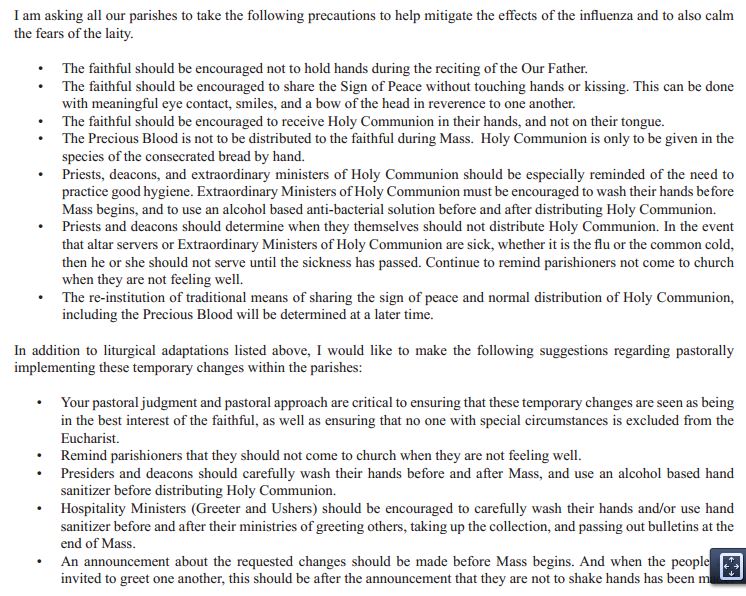 UPDATE:  The Diocese of Dallas has also just issued guidelines to protect their worshipers from potential exposure to Ebola. The diocesan Office of Worship’s “Statement on the Liturgy and the Ebola Virus” differs from the procedure in Fort Worth, in that Dallas parishes will still distribute the Eucharist under the species of wine. They leave the responsibility with each individual to determine whether or not to drink the Precious Blood.

You can read the Dallas statement in its entirety here.