Archbishop Thomas Wenski, archbishop of Miami, has warned archdiocesan employees that any action in support of Florida’s now-legal same-sex marriage could cost them their jobs. “Because of the Church’s particular function in society,” the archbishop wrote, “certain conduct, inconsistent with the teachings of the Catholic Church, could lead to disciplinary action, including termination, even if it occurs outside the normal working day and outside the strict confines of work performed by the employee for the Archdiocese.” The policy extends to include posts (photos or comments) on social media sites. The preemptive letter by Archbishop Wenski should help to thwart potential complaints, as have occurred in Chicago, in Georgia and in other states, when a church organist or music director has been fired after his homosexual relationship came to light. U.S. District Judge Robert L. Hinkle’s ruling that Florida’s same-sex marriage ban is unconstitutional took effect in all 67 counties at midnight on Monday, January 5.  Couples began marrying immediately,   even though Florida’s attorney general, Pam Bondi, is still pursuing state and federal appeals seeking to uphold the ban approved by voters in 2008.  Bondi’s effort to block these weddings until the courts finally rule was denied by the U.S. Supreme Court; and so Florida has become the 36th state to approve same-sex marriages. Click on the letter to enlarge: 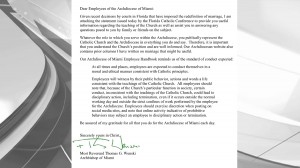 SCOTUS Has No Problem Aborting The Future Of...
Climate change is real, and, unless we do something to fix it,...
view all Catholic blogs
What Are Your Thoughts?leave a comment