Don Piper Was Dead–and Then He Wasn’t. Now a New Movie Tells His Incredible and Moving Story.

Don Piper Was Dead–and Then He Wasn’t. Now a New Movie Tells His Incredible and Moving Story. March 12, 2015 Kathy Schiffer

Don Piper was dead–and then he wasn’t. 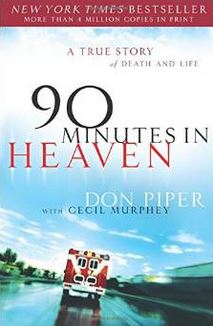 Pastor Don Piper died on January 25, 1989, when the vehicle he was driving was struck head-on by a tractor-trailer truck while crossing a narrow bridge.  By the time rescue workers arrived at the Texas bridge where the truck had crushed his car, his mangled body had no pulse and paramedics declared him dead.  For the next 90 minutes, with a tarp covering his body, Don experienced love, joy and life like he never had before.

Don was in heaven–or at least, at the Gates of Heaven, where loved ones who had preceded him in death were preparing to usher him to his eternal home.

But before that could happen, a fellow minister happened across the accident scene and sensed God calling him to pray for Don.  Despite the scoffing of Emergency Medical Technicians on the scene, he refused to stop praying.  And as he prayed, God brought Don back to life–a modern-day Lazarus, albeit with catastrophic injuries.

Don suffered excruciating pain after returning to his broken body.  He underwent 13 months of hospitalization, 34 major surgeries and years of painful therapy and rehabilitation.  In the months following his accident, he kept his experience of heaven close to his heart.  Finally, though, he began to open up to his friends and his wife Eva about his experience.  He penned the best-selling 90 Minutes in Heaven

, which recounts his death, his experience of heaven, and his slow return to health.  In the last ten years, nearly seven million copies of 90 Minutes in Heaven

And now, Don’s incredible true story is being made into a  movie that will open in theaters in Fall 2015.  Hayden Christensen, who starred in Star Wars and Jumper, stars in the role of Don Piper, while Don’s wife Eva Piper is played by Kate Bosworth (Blue Crush, Superman Returns).  Popular Christian recording artist Michael W. Smith plays Don’s friend Cliff McArdle.  The screenplay is written and directed by Michael Polish (The Astronaut Farmer, Twin Falls).

Filming for 90 Minutes in Heaven has just wrapped up in Atlanta, where I visited the set last month and met Don and Eva Piper.

In the 25 years since Don died and then returned, he has told his story countless times to church groups and other organizations.  Yet as I listened to his story, and later as I talked with him personally, it was as though he was telling it for the first time.  I saw in him a deep humility and a real peace.  He explained that he’d been frustrated and depressed after returning from heaven to his hospital bed and his painful injuries.  Still today, he yearns for heaven; but he is firm in his resolve to use his story for good, to reach more souls with the message of God’s love.

For whatever reason, it seems I’ve been invited to report several of those “near-death experience” stories in the past few years (and there will be a few more to come).  I’ve seen small differences in what different people experienced, and yet there is a common thread:  Colton Burpo, whose story is told in the best-selling Heaven is for Real

, experienced heaven as a small child sitting on Jesus’ lap, he saw his grandfather and a sister who’d been stillborn, and he spoke of brilliant colors (even a rainbow colored horse).  Dr. Eben Alexander, an acclaimed neurosurgeon and an avowed atheist who converted to Christianity after his NDE, wrote

of a white-gold light, then vibrant colors and rich music.

Don Piper’s story parallels those other accounts because he was greeted by relatives who had preceded him into heaven, and because of the rich colors and music.  Don explained that he had experienced glorious, vibrant colors that could not be described in earthly terms–hence, he’d been unable to share that vivid memory with anyone.  The music of heaven, which seemed to emanate from a point of light off in the distance, could not be replicated here on earth; but Don still recalls it, and finds peace occasionally even today by simply closing his eyes and meditating on that beautiful concert of angelic voices.

Don’s recovery from his severe injuries has been nothing less than remarkable.  Only after he told me did I notice that one leg was some four inches shorter than the other–indeed, one knee extended farther past the edge of his chair as we talked.  He never complained about his remaining health challenges.  What was apparent was Don’s calm acceptance of God’s will in his life, and his deep faith and hope for the future.  Both Don and Eva, his wife, were prayerful and joy-filled; they emanated God’s love, so much that when I phoned home to talk with my husband, I told him “I’m in love with Don and Eva Piper!”

Oh, and the movie!  At the time of our media set visit on February 19, filming had been completed only on the hospital scenes–which were grisly, to be sure!   Hayden Christensen, in the role of the seriously injured Don Piper, spent hours each day in make-up, preparing to play the role of a broken, bruised patient.  We were privileged to watch a little of the live filming, as the stage crew prepared for scenes involving Don’s transport by ambulance to his home.  We stood on an unseasonably cold Atlanta afternoon, watching as the film crew worked busily readying a small suburban ranch home with a “Welcome Home, Don!” sign in its front window and an ambulance and stretcher in the driveway.

It’s still too early–I haven’t yet seen the trailer for the movie, but I’ll share it later, when it’s released.  In the meantime, here is a brief clip about the film which I think you’ll enjoy.

Oh, and I should tell you this:  This film is the first production of a new company called Giving Films LLC.  In keeping with their mission to give back to God what He has abundantly given to us, Giving Films will donate 100% of the profits from 90 Minutes in Heaven to charities in the U.S. and around the world.

March 11, 2015
Pope Francis on a Possible Assassination Attempt: "I'm a Wimp When It Comes to Pain!"
Next Post

March 13, 2015 Triskaidekaphobians, Take Cover! It's Friday the Thirteenth!
Recent Comments
3 Comments | Leave a Comment
Browse Our Archives
get the latest from
Catholic
Sign up for our newsletter
POPULAR AT PATHEOS Catholic
1

The Grace of God in Scrambled...
Steel Magnificat
Related posts from Seasons of Grace