Heaven Is For Real: Secrets Colton Burpo Didn’t Tell You in the Book or the Movie

Now, Jesus did many other signs in the presence of his disciples that are not written in this book.

SAY WHAT?!  I’ve always found that single sentence in the Gospel of John to be one of the most compelling.  I mean, you’re telling me there are other things that happened–other miracles, other healings, other resurrections, other multiplications of loaves and fishes–which the evangelist saw, but which he doesn’t tell us about?

That’s a little like how I felt a few weeks ago when I interviewed Todd, Sonja and Colton Burpo, the real-life family whose story is recounted in the movie “Heaven Is For Real.”  Colton is the child who, at the age of three, nearly died and who visited heaven while he was in surgery.  Colton’s stories about sitting on Jesus’ lap, about meeting his great-grandfather “Pop” and his sister who had died before birth, about seeing angels and appreciating heaven’s indescribably rich color pallette, gradually came to light as he talked with his parents after recovering from surgery.

I was in Hollywood, attending a press screening of the movie before the official release date.  I talked with stars Greg Kinnear (who played Todd Burpo) and Thomas Haden Church (Jay), as well as with the director, producer and screenwriter.  (More on those interviews soon.)

Anyway, I asked Colton whether there were any other stories that he had remembered, but which hadn’t been told in either the best-selling book Heaven Is For Real or in the movie.  (See, I was hoping for a “scoop”!)

“Oh, yes!” Colton assured me.  Then Todd stepped in, explaining that he didn’t want people to misunderstand and think that the other stories were from an entirely different child–but that as Colton grew, his vocabulary increased and he remembered and recounted still other stories, many of them.  Todd and his father told me about two other books:  Heaven Changes Everything is a sequel, written when Colton was a little older, which goes into more detail; and Heaven Is for Real for Kids.  In the kids’ version of the book are illustrations; and Colton told me that he had worked with the artist to ensure that the art, as nearly as possible, represented heaven just as Colton had experienced it.

I haven’t received those follow-up books yet, but I do intend to read them soon.  If you’re a fan of the first book (and now, of course, a fan of the box-office hit movie), you may want to follow up by reading the other books or visiting the family’s website, HeavenLive.

We spoke of other topics, as well, during our brief interview.

How had their lives changed, following the success of their book and, now, the major motion picture about Colton’s experience?  Here, Sonja stepped in, seeming almost regretful.  “Our lifestyle hasn’t changed,” said Sonja.  “But we travel more.  We have a ‘new normal’.”

The Burpos were resigned to living their lives in accordance with the will of God, wherever He would take them.  But things are complicated now, Sonja told me.  Sure, they still live in the same house; Todd still pastors the same church, Crossroads Wesleyan.  But now they have eight employees, and four attorneys; and their schedule includes frequent travel (such as the trip to Los Angeles to meet with me and other journalists, and a trip to New York City to appear on major media outlets).

They try to maintain a close family; and this year, for example, their daughter is graduating from high school, and the family was busy with party plans and invitations.  They had fond memories of the days when they had free time on their schedule.

I asked Colton about his plans.  Of course, I asked, having seen heaven and met Jesus personally, you must have a strong faith…. (He concurred.)  So does this make you any more likely to pursue a career in ministry, like your father?

Colton answered my question without hesitation:  No.  He is concerned, he told me, about the number of denominations, about the fact that they teach different things.  He finds that confusing.

“So more than likely,” Colton said, “I won’t become a pastor.  More likely a public speaker.”  And he went on to say that he’d seen many churches where people truly loved God and worshipped God’s presence and spirit.  It has more to do, he said, with obedience and faithfulness.

That was my cue to say, “Well Colton, come on over to the Catholic Church!”  But this was an interview, not a witnessing session; and his father and mother were sitting beside him, happy in the Christian church they ran.  I said a prayer for the Burpos after my interview, asking God, if it be His will, to bring someone into their lives who would talk with them about the Catholic Church’s 2,000 years of continuity and consistent teaching.

By the way, Colton is quite an accomplished musician, and a future in Christian music is a definite possibility for him.  Here he performs in Amarillo, Texas, with Read You and Me, the official touring band for Heaven Is For Real LIVE.

Oh–and you can read my earlier post re. the movie here, and my book review months ago, when the movie trailer was first released, here.

UPDATE:  The movie Heaven Is for Real is now available on DVD.  You can get your copy here. 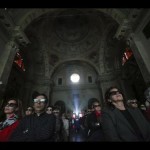 April 27, 2014
Italians Watch the Canonization in 3D Glasses
Next Post

'The Matter of Life' Asks a Key Question...
Is a baby in the womb a human being, a person? This...
view all Catholic blogs
What Are Your Thoughts?leave a comment
Copyright 2008-2021, Patheos. All rights reserved.