If there is one type of question about Hekate I get asked more than others it’s about her name. Like every aspect of my favorite goddess, her name has a fascinating and intricate history. From her origins to how we say her name today, there’s loads of intrigue, but few certain answers, to be found.

“We must rather seek for the origin of the name in the customs of Hecate-worship, as there, if anywhere, we may expect to find traces of the most ancient conception of the goddess.” John B. Bury in The Classical Review, Vol. 3, No. 9 (Nov., 1889)

The first part of understanding Hekate’s name both in meaning and in pronunciation is to give some context to her relationship with the ancient Greeks.  Most scholars agree that Hekate was not originally a Greek goddess, but that they adapted her from an existing Great Goddess. What is debated is where they found her – was it the north, south or east? There is evidence supporting her origins in each, a combination or all three of these directions. What is clear is that Hekate’s name, like her powers, are unusual in the Classical Greek world. Both point to origins elsewhere.

Hekate came down into Greece as an earth goddess with the usual interest that such a divinity always had in vegetation and nutrition, in wild and human life, but possessing also certain attractions for the moon, and trailing with her a very pernicious cloud of superstition and sorcery. – From Farnell, L. R. (1902). Cults of the Greek States, Vol. 2 Chapter XVI 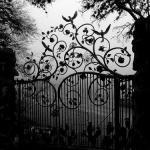