Reasons Why Spells Fail And Remedies For Avoiding Magickal Disasters

Drawing down the moon is quite an accomplishment. Now that you’ve got her in your hands, how do you ensure that the magick you create will do what you want it to? Bounceback, psychic attack, and outright failure. No witch wants any of these outcomes when casting a spell under that pale moonlight. While there are countless ways to cast a sure-fire spell, there are probably as many things that can go wrong. Here’s seven common reasons why spells fail and remedies for avoiding magickal disasters.

Let’s begin at the beginning by talking about how a spell actually works. A spell uses energies, from correspondences to deities, to achieve an outcome. These forces are evoked, petitioned, and directed in certain ways using things like lunar energy and words of power. Drawing down the moon for a spell is a great technique that can really work, but only if we know how to. There’s also considerations like matching our focus to the correct lunar phase. Then there are our words of power we speak and the correspondences we use. So much to take into account when casting a spell. Below are seven factors that can influence magickal outcomes with suggested remedies.

Most of witchcraft, probably all, is concerned with altering emotions. While getting the better paying job will solve financial woes, the real relief comes from not feeling stressed. We often seek to relieve suffering, from sadness to anger, in our spells. Being too emotional when casting a spell introduces too much unwieldy energy, unless that’s your goal. There’s also the times when our emotions are so pure that they become the current through which the spells works.

Remedy: Wait until your emotions are settled. Highly emotional witchcraft can lead to disastrous results. Unless it’s an absolute emergency, calm down and collect yourself. Fix your make up. Feed the cat. Most of the time, effective spellcasting requires a state of calm awareness. You want to be able to observe the spell as you’re casting it so you can better direct the forces, spirits, and correspondences being evoked. Find your center, ground and reinforce your boundaries, then get down to witchery.

I often get asked about the necessity of circle casting. The need to create a closed energetic container in order to cast a spell depends on the nature of the working, but, more importantly, on the environment in which the witchery is happening.

A messy/chaotic/stressful environment is problematic for any spellwork. This is certainly true of baneful workings, such as cursing, where you really don’t want the energy you’re releasing get stuck in the energetic quagmire of your immediate surroundings. We don’t want healing being sent to get trapped around us, either. This also applies to toxic people in your vicinity.

Remedy: If you must do witchcraft with those troublesome types nearby set a dish of black salt under their bed and then do your witchery after they’re asleep. To bypass the problems of a chaotic environment, cast a circle that not only creates your protected space, but release it with gusto, guiding it out of the environment so it can ride the witch wave to achieve your goal. Maybe a good spell would be to help get rid of the problems in your surroundings. Do what you can.

This is closely related to the chaotic environment problem since harmful spirits, who are typically curious and always looking for easy ways to cause trouble, are attracted to disarray and toxicity. This can happen when you aren’t a great magickal director as well. While malevolent entities can come calling, we can also unintentionally summon nasty human energy, too. For protection, banishing, and hexing spells, we can end up having the spells bounce back if we aren’t careful. Worse yet is attracting psychic attacks.

Remedy: The more specific your spell and the cleaner the environment you do the witchery in, the less likely you are to accidentally attract baneful energy.

Here’s one I’ve been guilty of more times than I care to admit. Also related to overly emotional witchery, shadow spells are those based on fear. This puts us at an increased risk of attracting those baneful baddies, plus ramps up the probability that weird outcomes will ensue.

Remedy: Getting into that state of calm awareness helps as does taking the time to explore your motivations by developing a great intention.

There’s so many ways we can be messy with magick, from not taking the time to really draw down the moon to not giving the proper offerings to the deities and entities being petitioned. There are some spells that come from so deep within us that none of this matters. Those are rare. More often, poorly planned spells go awry.

Remedy: Do your research and follow your intuition. If Hekate is who you’ll be turning to, take the time to write a petition that evokes the appropriate epithets. Those are the energetic currents and characteristics of her that she will lend if the witchery matches them. Some deities like very specific offerings. Choose your correspondences wisely. Basil brings fire along with courage. How will you deal with that?

6. Not Claiming Your Power

When nothing happens after a spell, we need to figure out why. If you’ve done all the right things, but still get no results at all, then perhaps you aren’t casting from your power center. The spirits know when we lack confidence, just like when we are sloppy or the environment is chaotic. Another sign of being disempowered is not following your intuition. Do all that research and then do what feels right.

Remedy: Call all your power back to you before casting a spell. There’s many ways to do this, from rebirth rituals to soul retrieval. The point is to do what’s required to get yourself standing in your sovereignty. Remember that you are the most powerful part of any spell. It all depends on you. Unless, of course, you’re hoping for the gods to deliver a miracle while you sit idly by. But that’s not witchcraft, it’s wishful thinking.

Magickal bypassing occurs when we reach beyond our abilities. This is a real problem that nobody wants to talk about, especially with so many newcomers to the craft of the wise. Let me be clear that I am not insulting any of you who are just unleashing your inner witch for the first time. I know how it feels to want to summon powerful spirits, and I also bear the scars of doing so before I was ready.

Remedy: Know thyself truly is one of the two rules that matter in witchcraft. The other is that a witch who cannot hex, cannot heal, but that’s a subject for another time. Back to introspection as it relates to knowing your current witch powers. Candle magick is a fantastic place to begin. Practice being able to mingle your energy signature with that of your chosen flame. Then direct it to your target. Slide your intention into this current and then direct it where you need it to go.

Here’s To The Unknown

Witchcraft is about going boldly into the unknown. We are curious creatures, forever pushing our horizons. However, there’s so much more to the forces we work with than we are capable of understanding. Often my attempts at controlling as much as I can in a spell, like in this Witch Bottle Spell for Protection, Growth, and Success, is an effort to minimize the likelihood that something I haven’t thought of or can perceive messes things up for me.

I always add protection energy into a spell, to help ensure that it travels across the witch wave safely. Beyond that, we will always be susceptible to forces beyond our control. Observation is vital. That spell you think didn’t work may over time, or in a very different way than you’ve imagined. Could be that those forces you petitioned and that moon you drew down have a different interpretation of your spell than you do. If you work with entities and deities, remember that they often act in mysterious ways. Some say that they even like to amuse themselves with our plans. Do the best you can. The rest is out of your hands, especially when they are full of moonlight.

Three Simple Spells for Personal Development: Confidence, Opening Up and Standing in Your Power

Prosperity Magick: A Spell and Correspondences 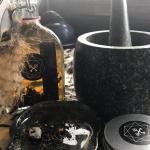 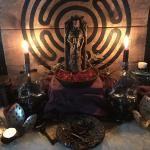 January 24, 2019 Hekate and the Hieros Pyr: Using Her Sacred Fires in Witchery
Browse Our Archives
Follow Us!