The Witch Who Serves No One

Witchcraft is, above all, a way for us to stand in the power of our truth. Witches need serve no one, not deities, spirits or other humans. We are sovereign practitioners who ultimately are responsible for our own actions. There shouldn’t been any room for servitude. Haven’t we been forced into supplication long enough?

“I also don’t supplicate to any deity or entity. My personal mantra has always been, “a witch serves no man.” All acts of giving away my power are taboo as a result. I’d rather be seen as difficult than a “yes witch.” from Gatekeeping, Harm None And Useless Taboos

To be clear, by servitude I’m referring to supplication to others, whatever form this may take. The relinquishment of free will. Bind faith that an all-seeing god will grant me boons if I am among his chosen.

Bending the knee, putting their will above ours, and blindly trusting in the “universe.” These are a few examples of supplication. Others include having to engage in a rigid practice of worship. Doing specific things to curry the favor of deities and spirits or else risk their fury. This reminds me of the ancient texts describing Hekate’s vengeance that seems more like folkish superstition than witchcraft. Her witches were on the side of her horde, evoking fear in others, not worrying about incurring her wrath. Their free will was the most frightening thing to those who were weak. This is contrary to the very spirit of witchcraft, especially that of the ancient witches associated with my favored goddess, Hekate. I am a witch who serves no one.

Take Your Gods Who Punish Somewhere Else

While I’m certainly a believer that some sort of “great work”has been ascribed for this particular incarnation of mine, I’m not bound to it. Ultimately, I keep my own keys. I believe that the hard-won autonomy of the modern witch behooves us to be fully accountable for our actions. Yes, I honor the deities with whom I associate. I respect their myths and use their energies in my witchery. I make offerings to them. All of this is done of my own free will. I don’t have any fear that if I were to stop doing this acts that they would “smite” me down. That line of thinking veers dangerously into dogmatic religion. It reminds me of my childhood in the Christian church where the omnipotent God was always watching, waiting for me to screw up so I could be punished.

Being A Willing Seeker of Mysteries

The whole idea that by doing the right thing, including worshiping a deity, somehow earns me their favor is a bit uncomfortable to me. Now you might be thinking that this is a contradiction since I write so often about my devotion to Hekate. For me, my deep affection and personal pledge to Hekate is not servitude. I stand boldly before her not as her supplicant but as a willing seeker of her mysteries. If I do what I believe she requires of me will my life improve? I like to believe so, but this notion seems too simplistic for me. Perhaps we truly gain her benevolence when we act as willfully as she and her witches have always done.

How much sense does it make that an earth-cleaving goddess would require blind adherence? That’s a big question that makes for excellent discussion since there is absolutely no way to know the answer. Hekate, like all deities, to me, is largely imperceptible by my limited human condition. She shares her keys of witchcraft with me willingly. It’s up to me to reach the place where I can claim them as my own.

Being Forced To Bow Down: No More

What I do understand is that witches have for centuries been subjected to the whims of the power-hungry, forced to hide and bow down to others and their gods. Doing this now, even of my own choosing, has absolutely zero appeal to me. This extends from my childhood in the Pentecostal church, both in how we were supposed to serve “The Lord” and how women were treated. I have a deep seated resistance to all things patriarchal, including servitude. Of course, my lived experience mirrors that of witchcraft (and women) on the societal scale.

My problem with covens is that, in my experience, they often suffer from leaders who need supplication to shore up their egos. Seriously, I have no interest in being anyone’s high priestess for this very reason. Pedestals are uncomfortable and dangerous.

Pseudo-Sovereignty And Being Of Service

It’s like saying that we want to be powerful, but we’re happy to leave the big responsibilities to others. I’ve never been able to wrap my head around the whole concept of servitude. Implicit is the notion that this “other” will dole out harsh punishment if we don’t do as they demand. How does this fit with the liberating power of witchcraft? Is this a fear-based response to our own power? Isn’t it time to just stop denying that we are powerful?

Then there’s the whole thing with surrendering, whether it’s to our mission in this incarnation or to the demands of a situation. There are times when we are seemingly powerless. Heartbreak. Loss. Disaster. There is always a choice in how we react to these things.

Witchcraft is inherently about resistance. However, it’s also about developing wisdom. That requires knowing when acceptance is the most magical response to what’s going on. Wisdom doesn’t come from blind faith but from holding ourselves accountable for our lives, both the successes and the disasters.

Letting the “Universe” Have Your Power

Sometimes I run up against this “the universe has my back” vibe which is the ultimate form of servitude because it implies that somehow the “universe” is taking responsibility for my actions. Whatever happens, it’s really not my fault. I’ll take the blame for mistakes instead of believing that vague forces are deeply involved in my day-to-day life.

Build Your Own Throne

Serving another requires putting them up on a pedestal. Whenever we do this, we are automatically involving our own power by giving them power over us. This can be because we want to transfer responsibility to them. Another reason is that we elevate them as a means of control. My goddesses are wild and free. They have their own throne, they don’t need me to put them on my feeble human one. This doesn’t mean that deities can’t be venerated, but I don’t think expressing gratitude or petitioning one for witchcraft support equates worship. Our efforts are better used to construct our own thrones, made of the spirits, correspondences and symbols that resonate with us. Keep your own keys and collect others wisely. Be a witch who serves no one.

The Necessity of Baneful Witchcraft

Give Me A Witchcraft That’s Wild and Free

Keep Up With Keeping Her Keys. 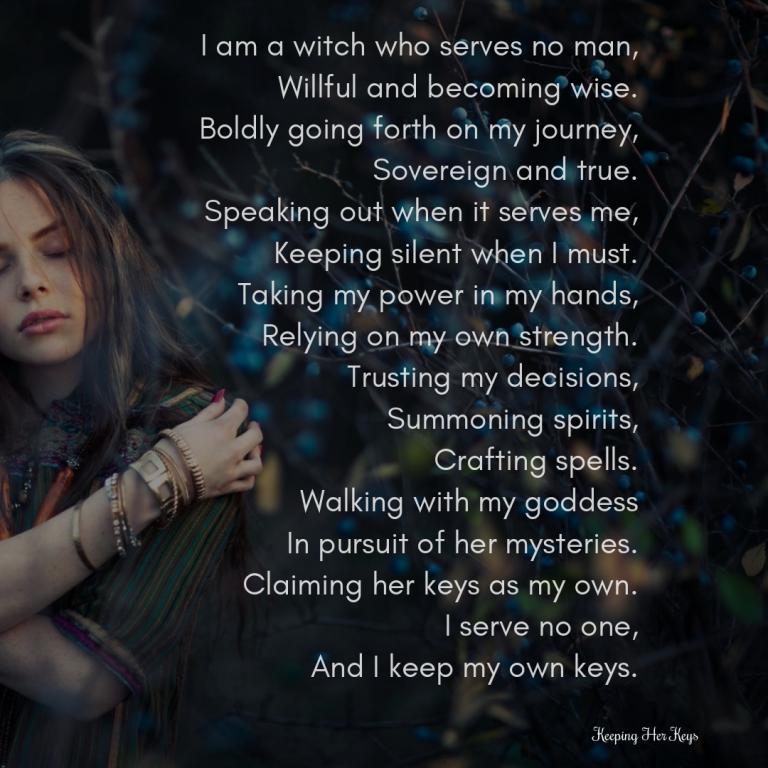 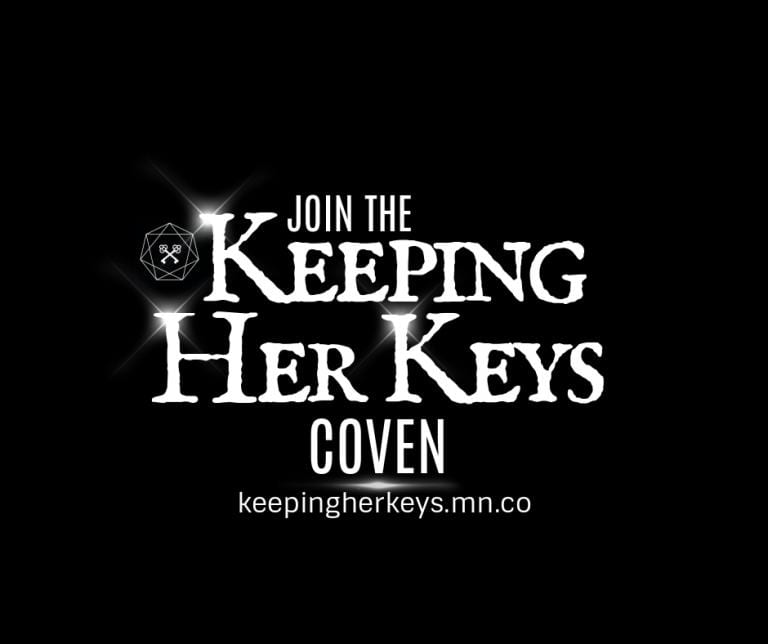 Courses, classes, events and more. Walk with the goddess. 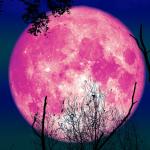 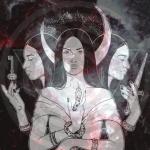 April 25, 2019 Keeping Her Keys: The Rise Of Hekate And Her Witches
Browse Our Archives
Follow Us!

Pagan
Diving Into The Unseen River: Ways To Deepen...
Keeping Her Keys
TRENDING AT PATHEOS Pagan

Witchcraft on Lockdown
These are challenging and unusual times we are living in. The future is...
view all Pagan blogs
Copyright 2008-2020, Patheos. All rights reserved.