I call out to the April showers that really do bring May flowers,
And the Full Moon who pours her secrets in the drops of rain,
Bringing to me the power of becoming,
Embracing the promise of abundance returning again.
To the chill in the night air that whispers of death,
I claim your power,
Destroying that which doesn’t serve me well.
You creep across those bold pink blossoms.
They resist your seduction,
Drawing their strength from the warmth deep within the Underworld.
I, too, summon my resilience from the darkness of Hekate’s Cave

As I walk towards brighter days.
Hail to the Full Moon of April!

There’s so much lore surrounding this Full Moon, often the first one of spring. Known to some as the Pink Moon, from the pink flowers – phlox – that bloom in the early spring in some parts of North America. Other names for this Full Moon include Sprouting Grass Moon, Fish Moon, Hare Moon, and Wind Moon. The Old English/Anglo-Saxon name is Egg Moon. Also known as the Paschal Moon since it’s used to calculate the date for Easter.

To me, this is the first Full Moon of spring regardless of where it finds itself on the calendar. Around here the April Full Moon is usually the time of the true seasonal transition.  I feel the shift. Persephone has returned to the Middle World, turning the Wheel of Time towards the season of becoming. Artemis wanders the natural world once again. Circe ponders and plans for her Witch’s Garden. Hekate , their guide and companion, returns with them.

As the green world awakens,

Reminding me that I, too, can become new. 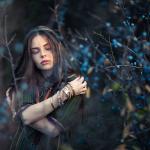 April 18, 2019 The Witch Who Serves No One
Recent Comments
0 | Leave a Comment
"Cyndi, that was amazing! I really needed to hear all of that! I'm only just ..."
Chris Ayers Leaning Into Hekate’s Crossroads During COVID-19
"I just found this post 2 years later and I’m going through my spiritual awakening/rebirth. ..."
Spookybookie The Witch Reborn in Autumn: Spiritual ..."
"There seems to be no ritual attached via the link. I'd love to see it ..."
PPingrey Meeting the Wise Woman of Winter: ..."
"Imagine in 100 or 200 years what tripe from our popular culture will have stood ..."
JenniWest Welcoming The Witches’ New Year With ..."
Browse Our Archives
Related posts from Keeping Her Keys